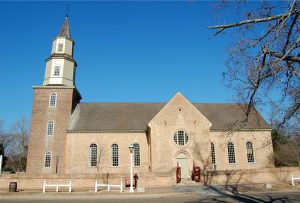 The Bruton Parish Church is the oldest surviving building in Colonial Williamsburg with construction completed in 1683 — over 300 years ago. It served as a makeshift hospital during the Civil War and later became a mass burial site for about one hundred soldiers killed during the Battle of Williamsburg.

Surrounding the church is a gorgeous cemetery with graves marked from the 17th century all the way up until the 20th century. Each grave carries its own story and the story of the person buried beneath it. From unknown Confederate soldiers to one of the church’s colonial reverends and his wife who died too soon, the adjoined Bruton Parish Church Cemetery is truly a melting pot for the dead.

Want to explore the history and ghosts of Williamsburg for yourself? Join us for a hauntingly fun and historically accurate Williamsburg Ghost Tour!

History of the Bruton Parish Church

The Bruton Parish Church is located in the restored area of Colonial Williamsburg. It was established in 1674 by the consolidation of two previous parishes in the Virginia colony and remains an active church today. The building was constructed somewhere between 1711 and 1715 and was designated a National Historic Landmark in 1970. It truly is a shimmering example of colonial religious architecture.

The roots of the Bruton Parish Church run deep, tracing back to the Church of England and the new settlement of Jamestown in the early 17th century. The role of the church and government had been established by King Henry VIII years before it ever reached America. This same relationship was brought to the new country, for better or worse.

When the English colony was established in Jamestown, the conduct and worship, as well as the construction of a chapel, was given first priority before the first was even built.

Reverend Robert Hunt served as the first chaplain of that primitive chapel all those years ago. He was described as an honest and courageous man, even bringing harmony and acting as a peacemaker when men would quarrel.

The settlement evolved, and the colony grew. Bruton Parish was formed in 1674 when Marston Parish in York County merged with Middletown Parish. The name of the parish comes from the town of Bruton, in the English county of Somerset which was the ancestral home of several of the leading colonial figures at the time.

Colonel Page donated a plot of land of about 144 feet by 180 feet, and funds for building a brick church and for the surrounding churchyard in 1678. In return for his donation of land and funds, Colonel Page was allowed to have his family seated in a special pew at the front of the church.

Historians from the Colonial Williamsburg Foundation have noted that the original brich church stood near the center of Williamsburg’s original survey map, drawn fifteen years after it was built. The church was an important part of the community’s life, however, it was in poor condition and deemed inadequate for such a prominent role.

In 1706, the vestry began considering the construction of a larger church, but with only 120 families in 1724, the parish could only afford to plan a small church, just large enough for worship. They soon invited the colony’s government to finance an enlargement to accommodate their needs, and four years later the General Assembly agreed to fund pews. Royal Governor Alexander Spotswood drafted plans for the structure, a cruciform church that was 75 feet tall with long wings, the first of its kind in Virginia.

Under the watchful eye of the church rector Dr. James Blair, the church was finished in 1715 and had all the necessities — books, bibles, an altar, cushions, and more.

Today, Colonial Williamsburg’s Historic Area occupies just over 170 acres of land and includes 88 original buildings and more than 50 major reconstructions. Bruton Parish Church is the most active parish in the Episcopal Diocese of Southern Virginia and has nearly two thousand members today. The church is restored to its original colonial era looks, and the church still uses a bell cast which in 1761, rang to celebrate the signing of the Declaration of Independence and rang again to mark the end of the Revolutionary War.

Unexplained Happenings at the Church

When learning about the history of the church, one will find some pretty strange stories surrounding it. Remember the colonial Reverend we mentioned earlier? The one buried in the adjoined cemetery with his wife? Well, when Reverend Jones and his wife were expecting their first child, complications arose during labor and the doctor informed him that his beloved wife would not survive their baby’s birth.

While she was on her deathbed, he proclaimed his undying love for her and told her he could not live without her by his side. He asked her to wait for him so that they could be together in heaven, and had her buried in the church cemetery.

Three months later, Reverend Jones was riding into town in a carriage with a tombstone he had made for her grave. During this time, witnesses saw his wife roaming the church and cemetery grounds, even sitting in one of the church pews, plain as day. The only problem is, she was dead and buried months ago.

Not only was Reverend Jones bringing a tombstone to mark his late wife’s grave, but he would arrive with someone else — his new wife.

Almost immediately upon the arrival of Reverend Jones, people continued to see the apparition of Mrs. Jones in the church and the graveyard, only now she was seen crying and wailing, angry over his broken oath to her.

To add insult to injury, Reverend Jones had his new wife’s grave plot placed between him and his first wife. The Joneses are still buried in the Bruton Parish Church graveyard.

A second story comes from the side entrance to the church from two security guards. Late one night, two Colonial Williamsburg Security guards were sitting in their patrol car, and saw a man walking up from the palace green along the road towards the church. He was described as a tall, shadowy figure dressed in cardboard black suit with a vest. He had a strangely elongated neck, but what surprised them most was that he had red, glowing eyes. (It is often thought that ghosts with elongated necks were likely hanged in life… we have not been able to find any historical evidence to point to someone having been hanged near this place at all – the gallows were actually located some distance away from here on Capitol Landing Road. It is still interesting; nonetheless, to wonder why this apparition appeared the way he did…). As security was watching, they saw him duck behind this tree and the brick wall.

They assumed that he must have used the tree to jump over the wall, and entered the cemetery in search of him. When they entered the church cemetery, he had vanished. They looked all around, but couldn’t find him. They thought they heard the sound of the church door closing, and believed the man somehow made his way inside the church. When they arrived at the main entrance, it was locked. Determined to catch this intruder, they unlocked the door and entered the church. As they allowed their eyes a chance to adjust to the dark, they heard a strange sound: it was described as being sort of a whoosh-­‐thud, whoosh-­‐thud. Once they turned on their flashlights, they could clearly see what was causing the noise: the hymnals were seen to levitate up from the church pews, fly across the room, and hit the wall. Needless to say, they decided to flee the church.