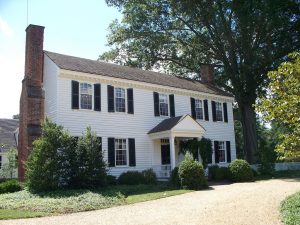 Francis Street is home to numerous original colonial homes and historic inns and bed & breakfasts, including the Williamsburg Inn, with rooms furnished with antiques. Queen Elizabeth II has even visited the Williamsburg Inn a time or two. Bassett Hall lies just down the way.

Francis Street boasts countless unique museums, homes, shops, you name it — all original. One of these is the Abby Aldrich Rockefeller Folk Art Museum, showcasing an interesting range of artifacts made by local craftsmen.

Want to explore the haunted streets of Williamsburg for yourself? Join us for a hauntingly fun and historically accurate Williamsburg ghost tour!

Another reportedly haunted structure on Francis Street, this eighteenth-century farmhouse was once the home of John D. Rockefeller and his wife, Abby. It’s located on 522 East Francis Street and currently offers tours to the public.

Bassett Hall was built somewhere between 1753 and 1766 by Philip Johnson, a member of the House of Burgesses. It was named after Martha Washington’s nephew, Burwell Bassett. The land on which the hall stands was patented by the Bray family in the mid-seventeenth century. James and Angelica Bray began life on this plot of land with their four children in 1671.

James was a prominent politician who rebelled against Governor William Berkeley in 1676 with Nathanial Bacon. Though these rebels were ultimately overcome by Berkely’s men, James and Angelica managed to escape prosecution.

After James passed away in 1691, Bassett Hall changed hands many times. Some parts were annexed as part of the city of Williamsburg, while others remained a part of James City County.

Sometime in the 1750s, a man named John Robinson became the trustee of the Bray family estate. He rented out the home until 1771 when it opened as a boarding house and tavern and was owned by Richard Hunt Singleton.

Sometime before 1794, Richard Corbin of King and Queen County purchased the home. He renovated it extensively, going as far as to hire the best local blacksmiths and masons to restore the moldings and groundwork of the home.

Bassett Hall, alongside its facelift, was ready to be sold once more — to Burwell Bassett, who already owned several other lots in the city of Williamsburg. At Bassett Hall, Burwell hosted countless balls and parties and invited famous artists and esteemed politicians over as guests. The acclaimed Irish poet Thomas Moore is believed to have stopped by in 1804, for example, during his travels from Norfolk to Richmond. Some say his stay at Bassett Hall was what inspired his poem, “To The Firefly.”

During the American Civil War, many civilian homes were utilized as makeshift field hospitals. Bassett Hall was no different — the Battle of Williamsburg actually erupted right near it and the family opened up the home to wounded Confederate soldiers, even though the Union army had control over the city as a whole.

In 1927, the Reverend Dr. William Archer Rutherford Goodwin (sheesh) purchased Bassett Hall. Goodwin was a famous priest and historian, who had a knack for restoring old colonial structures. He even earned himself the nickname “Father of Colonial Williamsburg.”

Shortly after he purchased the hall, the property was struck by lightning (what luck) and a terrible fire ensued which nearly destroyed the entire structure. It was restored completely by 1933 when it was deeded to John D. Rockefeller.

Throughout his life, Junior’s principal place of residence was a grand, nine-story mansion in New York. But Goodwin convinced Junior and Abby to purchase Bassett Hall, as a second home for their twice-annual trips to Virginia. The Rockefellers moved into Bassett Hall in November 1936 and the estate remained in their family until 1979.

The hall is tucked away in a peaceful pocket of Colonial Williamsburg and is surrounded by lush greenery. Like many old structures in the city, it’s also rumored to be haunted.

Hauntings at the Hall

Visitors to Bassett Hall report disembodied voices and unexplainable cold spots while on tours of its glorious rooms and halls. It’s no surprise since Bassett Hall has passed through so many hands — perhaps the ghost of one of its former owners is still keeping watch over the beloved home!

One guest reported that when she arrived at the hall with her family, she was struck by the scent of lilac and a very very cold wind. Mind you, this was the middle of August when she visited the city!

Could this have been the spirit of one of the ladies of the house? Did Mrs. Rockefeller wear a lilac perfume?

What do you think?