The Spirits of River Street 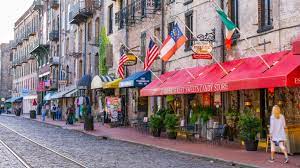 River Street — once Savannah’s main hub of activity and trade, now the cracked cobblestone and historic buildings are what remain of this centuries-old district. River Street runs along Savannah River, east to west. It acted as the main route for goods and traffic coming into the city of Savannah during its early years. The port located on River Street was the reason for Savannah’s quick economic rise. Now, the entirety of River Street seems to have hauntings around every corner. As Georgia’s oldest city, and one of the oldest cities in America, Savannah doesn’t disappoint when it comes to unexplained happenings. Want to encounter the spirits of Savannah for yourself? Book a Savannah Ghost Tour with us and learn the history and hauntings behind Georgia’s oldest city!

The Most Haunted City

Savannah was built exactly where it is due to the fort-like nature of the land. It’s located high up on a bluff, protected from attacks by water. General Oglethorpe decided to build the city here due to its natural ability to defend itself — this was important at that time. Unfortunately, Oglethorpe’s city was built right atop of Native burying sites. As any ghost aficionado can tell you, building anything on top of a burial ground is a recipe for hauntings.

River Street was located just at the base of the bluff, and docks were built off of the street to import and export goods to and from Savannah. These included farmed goods like cotton, and more tragic imports like enslaved folks.

These days, Savannah is well known for its hauntings — it tops almost every single list of ‘Most Haunted’ anything in America. Read on to find out why, and to learn the history of River Street.

A Short History of the Docks and Warehouses

Many of the buildings that dot River Street were once used as warehouses for cotton storage before it was exported. From these warehouses, cotton, as well as other assorted goods were packed onto ships by dock workers and sent off to their destinations. These dock workers, mostly of Irish, German, and African descent worked under extremely dangerous conditions. It wasn’t uncommon for a worker to be crushed underneath loads of goods being loaded, people falling from the docks and drowning was commonplace — men were killed in the hundreds as they endured the harsh working conditions.

This has led to the belief that the entire area of the docks is haunted. It’s basically a huge unmarked graveyard. It’s no coincidence that people have seen apparitions of men dressed in period clothing, darting from place to place along River Street.

Not only did these docks send goods out, they took goods in as well. For almost a century, these imports included human beings. Enslaved people coming into America to work farms. These people were stolen from their homeland, ripped from their families, and brought to a strange land to work for nothing and to face a lifetime of abuse, neglect, and extreme mistreatment. After enslaved people were unloaded from these cargo ships (in which they faced unrealistically horrid conditions) they were brought into the large warehouses of River Street. This was done to hide them from potential buyers, as slave sellers did not want anyone to see the terrible condition that these people were in.

Once the enslaved people were deemed ready to bring to market, they were hurried out the back of these warehouses and brought through the Factor’s Walk area. Many of these people never actually made it out of the warehouses alive, as they were forced to endure disease and terrible conditions inside of the warehouses as they awaited their fate. There’s even remains of some metal shackles along River Street that were once used to bind human beings.

River Street, just steps away from what is known now as Factor’s Walk, is another of Savannah’s tourist hotspots. River Street is one of Savannah’s most popular stops. Its boutiques, restaurants and historic allure draw visitors from all over the country. Its old cobblestone streets tell a story of a dark past, however. If we step back a few hundred years we’ll see enslaved African people being shuffled into stone tunnels to be traded. Immigrant workers loading up cargo ships with cotton. Thieves and drunkards hanging out in the darkest alleys along the street. The same buildings that stored cotton and enslaved folks are now the hotels, offices, and cafes seen today.

Aside from the numerous shops and venues, Factor’s Walk has a few more hidden discoveries to make. The entrances of various underground tunnels located in the area are roped off but visible when walking down Factor’s Walk. These tunnels are said to lead to different parts of the city and ended in basements of buildings. The tunnels are rumored now to be occupied by a few spirits that once used them. The loud, booming voices of men can be heard echoing from the sealed off entrances.

During the night, visitors to Factor’s Walk have seen an extremely tall and shadowy figure that just hovers around or stands menacingly. Others have been followed by this entity, claiming that a cold rush passed them as the entity disappeared. The cobblestone streets and pathways of Factor’s Walk hold every energy that has passed over them, absorbing even the darkest secrets of those who walked there before.

Not all of the spirits who reside at Factor’s Walk are believed to be slaves, over the years, Factor’s Walk has seen its fair share of tragedy.

As was the norm at the time, buildings were mostly made from various types of wood. It was an easy and cheap option for building, but the threat of fire loomed over at all times like a hungry vulture. In 1892, just two years after the warehouse was built, a fire broke out on the east end of Factor’s Walk. The strong breeze spread the flames, and within minutes the entire city block was engulfed, shrouded in dark smoke and massive flames. As Murphy’s Law would have it, 500 barrels of oil were being stored inside the warehouse at the time, so the fire was exacerbated as soon as it reached the building. Firefighters tried as they might, but they were unable to put the blaze out and by the time the fire subsided, the building was completely destroyed. No casualties were reported, but some believe the death of one man went unrecorded.

After the fire, an ordinance was passed that all new buildings were to be made from brick. The warehouse was rebuilt, and 700,000 bricks later, it was complete.

The Savannah Historic District started to undergo revitalization, with buildings being rebuilt from brick, and new and exciting shops added. HLC Hotels bought the warehouse and began renovations in 1985. The Olde Harbor Inn opened for business at the brick warehouse in 1987, and today its one of the more premier riverfront hotels Savannah has to offer, its website claiming that “what was once a bluff-side warehouse is now a visitors dream…” The hotel even welcomes guests of the four-legged kind, as well as guests who don’t occupy a physical body, like Hank.

So, who’s Hank? Hank’s origins aren’t too clear, unfortunately. Hank is thought to be the only casualty of the huge fire, and some even suspect that he was the one who started it. The blaze started near his office and Hank had gotten into a heated argument earlier that day with upper management. Many claim that he started the fire at an attempt for revenge. No casualties were actually reported from the fire, but many believe his death had just gone unrecorded. When his ghost began to appear after the building was reconstructed, he was affectionately named Hank.

These days, Hank is well-known and loved among staff and visitors of the Inn. Despite its ‘no smoking’ policy indoors, guests claim to smell the aroma of cigar smoke when his spirit appears, and others have seen a see-through apparition of a man smoking a large cigar around the Inn. He’s also known to move guest’s belongings when their heads are turned and throw coins into rooms at an otherworldly attempt to spook guests!

While visiting Savannah, we suggest you stop in at its most historic pubs, restaurants and shops to get a first hand feel for the Hostess City. You may want to check out the areas where the tunnels are (especially where they are sealed off). While there is no guarantee that you may encounter some ghostly activity, you might want to visit River Street anyway even if you feel hungry or in the mood for a drink.