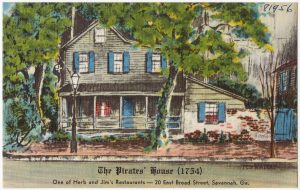 From shanghai-ing to spectral pirates, Savannah has it all! Want to see it all up close? Join us for a hauntingly fun and historically accurate Savannah ghost tour!

A History of the Pirate’s House

A block away from the rushing waters of the Savannah River, the Pirate’s House is a tavern that was built in 1794. Pirates and sailors alike would meet at the tavern for a drink and a good time. It was a popular destination among sea-faring men and soon became the local hotspot for brews and brawls.

Located in one of the most famous spots in Savannah, the place where the Pirate’s House was built was naturally inviting for sailors due to the thriving seaport town Savannah had become.

Underground tunnels were soon dug out to make the shady happenings of the Pirate’s House even more discreet.

During WWII, the building fell into disuse and lost its nautical spark. In 1945, the property was acquired by the Savannah Gas Company and the building was scheduled to be demolished. It was saved by Mrs. Mary Hillyer, the wife of Mr. Hansell Hillyer. Mary, along with a few other local lovers of history took it upon themselves to restore General Oglethorpe’s vision of Savannah.

In the process, the Pirate’s House received a loving restoration, ensuring that it would endure the years and be available for generations to come. The establishment reopened as a tea room in 1953 and boasts a fabulous menu with a cozy dining space. It changed faces again and once housed a jazz club before it became the bar and restaurant that it is today. But, as with any location in Savannah, all is not beauty and happiness — as you’ll find out soon enough below.

During the height of the Pirate’s House’s popularity, author Robert Louis Stevenson visited the building for some sort of inspiration. He left feeling the fires of creativity and soon wrote Treasure Island in 1883. The novel became immensely popular and even created the stereotypes about pirates that still exist today. A description of the book is as follows:

“In the book, Captain Flint and the Haunted Pirate House are mentioned. Flint was a ruthless pirate that captained his ship, The Walrus, around the world collecting a bounty of riches and treasure. Captain Flint then buried his treasure on a deserted island and murdered his crew.

In true pirate fashion, Captain Flint created a map of the location of the buried treasure with an “X” to mark the spot. He then gave this map to his first mate, Treasure Island character, Billy Bones. Eventually, Bones died from a stroke and the map fell into the possession of the book’s narrator, Jim Hawkins.

It’s said that Captain Flint’s life ended in Savannah many years after the story of his lost beloved treasure. His love affair with rum led to his eventual death. It’s even possible that he died in the very inn that inspired Stevenson to create his character. The Treasure Room of The Haunted Pirate House still contains early editions of Treasure Island to this day.”

It the early days, The Pirate’s House was a haven for seamen, criminals, and other less-than-saintly figures. Many men found themselves in the bar for a brew or two and waking up on a ship hundreds of miles off of the coast. This was a process known as ‘shanghai-ing’ and left countless men as indentured servants to the sea captains that kidnapped them.

Leading from the Pirate’s House rum cellar onto River Street is a musty tunnel. It’s been covered over since, but it was once used as a transport tunnel for these unsuspecting men. The Pirate’s House isn’t the only location with spooky subterranean tunnels — read about all of Savannah’s hidden tunnels here!

Even more, the Pirate’s House was well known for its drunken brawls, fights, and even murders.

Spirits of the Pirate’s House in Savannah

Savannah is a place of turmoil and unrest when it comes to the spirit world. It’s no surprise to hear when yet another location is ridiculously haunted. This popular tavern is no different — many visitors have reported strange ghostly activity during their visits to the Pirate’s House.

Even the employees of the bar have had their own strange happenings including glasses falling from shelves on their own and visions of apparitions wandering throughout the dining room.

Workers have reported feeling the eerie presence of entities and even coming face-to-face with the spirits of seamen who enjoyed the tavern in years past. The sounds of heavy boots have been heard moving about the building after closing time, and screams have even been reported coming from the closed off tunnels that run underneath the building.

Spirits of sailors are the most commonly reported occurrence, and for good reason considering the past of the building.

One of the more popular ghost stories may be just a tall tale, but it is interesting nonetheless — it tells of Captain Flint from treasure Island. As the story goes, Flint died inside the Pirate’s House and decided to stay. Could there have been a real life man that Captain Flint was based off of that actually did die in the tavern? Perhaps, but that’s a conversation for another blog!

Savannah is packed quite literally to the brim with haunts and spirits. Every corner, shop, cemetery, and square is teeming with legends of ghosts and reported hauntings. The Pirate’s House included. Looking to learn more about the spookier side of Savannah? Check out our blog here to take a deep dive into the darker side of the Hostess City of the South and to learn about haunted places all over the nation!