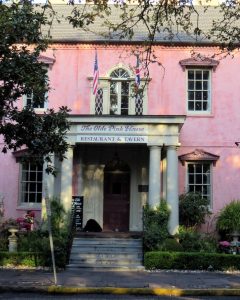 The Olde Pink House is one of Savannah’s many taverns, but for over three hundred years, the bright pink mansion was known to locals as the Habersham House. The Olde Pink Tavern sits of infamous Abercorn Street right on Reynolds Square.

Abercorn Street is home to more than just one haunted house, and like much of Savannah, the Olde Pink House is very, very haunted.

Want to experience the hauntings of Savannah for yourself? Visit us here to book your Savannah ghost tour!

History of the Habersham House

Habersham had three sons, and unlike their father they were anti-British — this angered their father. They all joined the Sons of Liberty, a colonial separatist movement. James Jr, Habersham’s eldest son, decided to use his financial connections to fund the Americans during the Revolutionary War instead of fighting directly.

As for the home, James Habersham had the house built in 1771, but due to the outbreak of the Revolutionary War, construction had to be delayed. The British occupied the home during the war and fueled the Habersham children’s angst against the British. Ten years after the finish of the house in 1789, James Habersham Sr. died in the house. His eldest son also passed away in the home, as well as a few of the enslaved people that Habersham kept in the home, many of which were children. They often fell ill with Yellow Fever.

The building has passed through a couple of hands and survived some of Savannah’s worst ties. The Habersham house survived a massive fire in 1796 while two hundred other buildings nearby burnt to the ground. This was due to the brick construction of the home. In 1812, the building became a branch of Planter’s Bank, the first bank in Georgia. The home also witnessed three wars and being seized by occupying forces — twice.Union troops even used the home as barracks when the occupied the city in 1864.

Jim Williams, one of Savannah’s leading preservationists helped to restore the home in the 1960s.

The famous, bright pink color of the home was actually an accident. The Habershams intended for the house to be white. But since it was built with red bricks overlayed with white plaster, the rain and humidity caused the bricks to bleed through the paint which gives the home its pink color.

This caused some ridicule from the neighbors, and the Habershams were forced to repaint the house white continually to restore the intended color. Unfortunately, the pink color constantly returned. In 1920, one of the later owners decided to embrace the tone and painted the house pink — cementing the Olde Pink House in history.

Spirits of the Olde Pink House

With the deaths that occurred in the home, it’s truly no surprise that there are a few resident spirits living in the pink home. One of which is said to be the ghost of James Habersham Jr, who is rumored to have hanged himself in the basement where the tavern is now located.

Legend tells that he learned that his wife was was having an affair with the architect that he had hired to design the home. He went down to the basement, completely devastated by her betrayal, and hung himself. Another story tells that he hung himself due to his sadness over his wife’s death.

Another story tells that Habersham died in 1799, with his cause of death being his slowly declining health. This story holds a bit more historic truth since Habersham is buried with his father and brothers at Colonial Park Cemetery. The issue with the suicide story is that people who committed suicide were not permitted to be buried in consecrated ground at that time. Some believe that he did, in fact, commit suicide, but it was covered up to stave off the shame that it would have brought onto the family.

The Olde Pink House Restaurant is said to be haunted by the apparition of Habersham Jr., who is reported frequently in the restaurant wearing colonial garb. Patrons see Junior hanging around and people watching, Other guests to the restaurant have conversations with this man, thinking he’s a re-enactor, only for him to vanish right before their eyes.

Since the building was converted into a restaurant in the 1930s, employees have continued to see the spirit of James between October and March — he’s known to stay away from the summer heat. Employees report that he straightens table settings and puts chairs into their place.

His spirit has also been blamed for lighting candles that are placed throughout the restaurant.

Several other spirits are known to occupy the home as well. One is a friendly Revolutionary War veteran. He’s known to visit the bar and ask for visitors to raise a glass for a toast. One of Habersham’s descendants is also known to join in on the fun at the bar, even ordering drinks. As the night ends, he’s seen walking to the cemetery, just as soon as he nears the Button family monument — where his body was buried.

A female spirit has been spotted on the second floor of the Olde Pink House as well, sobbing. Former house servants have been witnessed throughout the restaurant as well, wandering aimlessly. Children have also been reported playing in and around the home. Could these been the enslaved children that died due to the Yellow Fever epidemic that swept through Savannah?

These children have also been known to taunt staff and play tricks of guests. Some spirits have even taken a liking to locking women in the bathroom, which led restaurant staff to take the locks off of the doors. Other strange occurrences like menus standing on end, glasses being knocked over, and even full bodied apparitions.