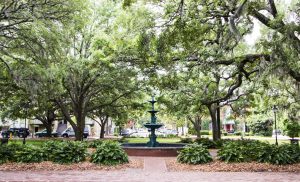 What is it about these quaint historic squares that charms us? Could it be the cobblestone paths leading to a welcoming wooden bench? Perhaps its the elderly oak trees draped in Spanish Moss, hanging over the walkways with a watchful eye? Whatever the reason, the squares of Savannah are some of the most historic — and with centuries of history comes a whole lot of hauntings. Lafayette Square is one of these charming parks with a hidden history, more than just a few homes around the square are occupied — by ghosts!

Lafayette Square is just a little parcel of land nestled between a couple streets but it sure does harbor a lot of haunting history. One of twenty-two squares in Savannah, it’s located on East Abercorn Street and East Macon Street.

Laid out in 1837, it’s just south of Colonial Park Cemetery, another haunted hotspot, and east of Madison Square. The square is named after Gilbert du Motier, Marquis de Lafayette, the French hero of the Revolution that visited Savannah in 1825. The oldest structure located on Lafayette Square is the historic Fitzgerald Pelot House which was finished in 1840.

The square has a beautiful centerpiece — a fountain commemorating the 250th anniversary of the founding of the Georgia colony. An ever-present reminder of just how deep Georgia’s roots run.

Plenty of historical structures occupy the square, including the Cathedral Basillica of St. John the Baptist, Centurian House, and the Flannery O’Connor Childhood home. You’d be hard-pressed to find as much history in one place in anywhere else in the United States, but for Georgia, history comes naturally.

Located on one of Savannah’s most historic streets, Abercorn Street, the Andrew Low house is a gorgeous mansion with a history that spans centuries in Georgia. The Andrew Low house sits on Lafayette Square at 329 Abercorn Street in Lafayette Square, and these days it operates as a museum that tells the stories of the influential figures that spent time there. A handful of well-known names have visited the Andrew Low House over the years, one of which included acclaimed author William Makepeace Thackeray and Robert E. Lee.

Andrew Low was in his prime as his home was being built in 1848, he was married to his beautiful and doting wife Sarah, he had three lovely children, including a son to take over the business. The sunshine did not last, however, and tragedy struck the Lows before the mansion was even finished.

Sarah Low and the one son both died of illness before the home was open for living. Andrew was completely devastated understandably, and he was left a single father of two young girls. Heartbroken but attempting to stay strong for his daughters, he moved them into the now-finished home. Andrew eventually remarried a woman named Mary Cowper Stiles.

Andrew Low’s life was long and fulfilling. He not only served as a Brigadier General in the U.S. Army during the Spanish-American war, he was also one of the most successful cotton businessmen in Savannah. Low even spent some time behind bars after it was believed that he was conspiring with the Confederacy during the Civil War.

But in 1860, a little legacy was born. Her name was Juliette Magill Gordon, who in her 20s would marry the son of Andrew Low and Mary Cowper Stiles Low. Juliette was also known as ‘Daisy,’ and later became famous and wildly successful as the founder and president of the Girl Scouts.

William and Daisy enjoyed a lavish life together, but their romance soon turned to tragedy when divorce was being discussed and William ended up passing away from a stroke. Daisy then acquired the family home, and on a holiday in England she met a man named Robert Baden-Powell, the founder of the boy scouts. He was the driving force behind her, urging her to create the Girl Scouts, which she did — it saw much success.

Not a year later, tragedy struck the Low family once again when Daisy was diagnosed with cancer in 1923. She kept it secret, and refused to seek treatment. Just four years later she passed away. She was buried in her Girl Scouts uniform in the infamous Laurel Grove Cemetery.

Daisy’s death brought reports of ghostly happenings at the home. There remain a few specific entities at the Andrew Low house. A ghostly butler who still attends to his duties, the apparition of Robert E. Lee who floats about the property, and even a mysterious rocking chair that belonged to the Low family, moving on its own.

The gorgeous Hamilton-Turner Inn was immortalized in the novel by John Berendt, ‘Midnight in the Garden of Good and Evil.’

The Hamilton-Turner Inn was built in 1873, this 17-room home built for Mr. Samuel Pugh Hamilton and his wife Sarah. He would later become the Mayor of Savannah and Grand Master of the Knights Templar. He and Sarah were known to entertain guests in lavish decadence and wanted a home that would suit their needs. The home was nicknamed ‘The Grand Victorian Lady,’ and is located on Lafayette Square in Savannah’s Historic District.

In the Inn’s extensive history, numerous reports of unexplainable activity have surfaced. Visitors claim to see full-bodied apparitions, the sounds of ghostly children giggling, and even billiard balls clacking when no one is holding a cue. Some have even seen a man smoking a cigar on the rooftop of the inn, and occasionally he has been seen holding a rifle. Others claim to see a Civil War soldier walking about the hallways at night, knocking on guest doors.

As with pretty much anywhere else in Savannah you may find yourself, the spirits of Lafayette Square are ‘alive’ and well. The entirety of the city is built upon countless graves leftover from the past, and with centuries of history comes centuries of death, leftover energies, tragedy, and of course — hauntings.

Have you ever visited Lafayette Square or any of the haunted locations nearby? What did you experience there?