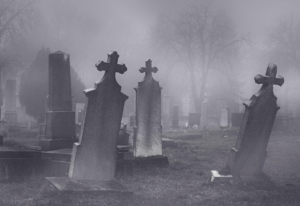 Savannah — the Hostess City of the South, with Spanish moss hanging from ancient oaks and spirits from years past on every street corner. What makes this historic antebellum city so haunted? Could it be the city’s history of war and violence? Or, perhaps it’s the death and disease that swept through the city ages ago… our guess is that the ground causes the city-wide hauntings underneath the cobblestone paths and roads where the hidden burial grounds of Savannah lie.

If you’d like to figure out the mystery for yourself, join us for a hauntingly fun and historically accurate Savannah ghost tour!

Why Does Savannah Have So Many Unmarked Burial Grounds?

Savannah is one of America’s oldest cities, which has seen countless battles, deaths, epidemics, and war. When it was just a small city, Savannah didn’t have a dedicated place to bury the dead, especially in the case of people in the lower classes. Enslaved people, the city’s poor population, and low-ranking soldiers were buried anywhere there was space. Houses and buildings were later constructed right atop these graves. Settlers were also known to disregard the countless Native burial sites around the area as they worked to expand the city.

Savannah was also one of many cities that allowed for at-home burials. So, those who couldn’t afford a burial plot at a cemetery buried their loved ones in their own yards. Many of the older homes and lots around Savannah are likely to have a couple of bodies buried beneath them.

Even the outbreak of Yellow Fever created unmarked burial grounds as people who perished from the disease were buried in mass graves. Stories of zombies began to surface as the victims of the illness awoke from a comatose state, believed to have already been dead, crawling their way out of shallow graves.

For most of the city’s history, African Americans were buried separately from their white counterparts. This continued well into the Civil Rights era and, unfortunately, can still be seen today. Two black burial grounds existed during the 1800s, one at Habersham and another on Abercorn Street. Between 1763 and 1851, these burial grounds were the only places available to black people. The city stopped keeping records of these grave sites in 1855, and the locations of graves and those buried there were lost over the years.

In the 1850s, the two burial grounds were paved and turned into town squares. A slap in the face came when the squares were named after two white supporters of slavery — John Calhoun and George Whitefield. In 2020, a movement sprouted in Savannah to rename the parks Sanfoka and Jubilee Squares.

The bank was the location of a Muskogee burial ground, and the Yamacraw believed that the bones of their ancestors contained remnants of their spirits. Today, Yamacraw Bluff is contained entirely in the historic district of Savannah, meaning that an ancient Native American burial ground is beneath Savannah’s street.

The Yamacraw people also had two burial sites of their own, the largest being underneath the Pirate’s House.

The first Jewish people arrived in Savannah shortly after James Oglethorpe arrived. They settled around Ellis Square and formed the very first Jewish congregation in the southern United States. Oglethorpe welcomed the Jewish community and set aside a plot of land for their burials. The plot of land was just outside of city limits on South Broad Street.

The burial ground was the site of a battle during the Siege of Savannah in the Revolutionary War. French and American troops used the Jewish burying ground as a natural bluff to watch the advance of the British troops closely.

Today, the original burial ground is right on Oglethorpe Avenue. The site is only marked with a historical marker but is paved over.

Could This Be Why Savannah Is So Haunted?

The hidden burial grounds scattered throughout the city could be partly responsible for Savannah’s ghostly reputation. Every other building seems to be built on land that contains human remains. Perhaps their spirits are restless, kept busy by the spiritual vibrations in the city.

Savannah has a long and rich history. Slavery, the cotton industry, and bloody battles; the city has seen it all. The ghosts and spirits of Savannah’s past are still alive and well. Spend a night at the East Bay Inn! The building was once a warehouse for the city’s many cotton factories, but now it’s a historic hotel inhabited by a friendly ghost named Charlie. Check out the Old Candler Hospital. During the outbreak of Yellow Fever, the halls of the building were stacked with the victims’ bodies. Today, you can see their ghosts wandering about the building. Grab dinner at the Moon River Brewing Company! Today it’s a restaurant, but the building was once a hotel, then a warehouse. The building is one of the most haunted in Savannah, and guests have been harassed by ghosts while having dinner.

If you’d like to learn more about the hauntings of Savannah and those of the rest of the United States, check out our blog here!