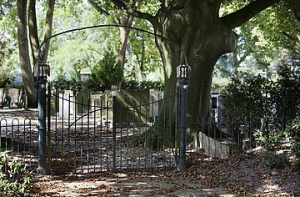 In 1853, Colonial Park Cemetery was full. Looking for other places to bury their dead, a new graveyard was commissioned and constructed in Midtown Savannah. The Laurel Grove Cemetery is among the most beautiful in the United States, and it’s almost entirely Victorian, with the majority of its graves filled with the remains of those who lived in the late 19th and early 20th centuries. It resembles famous Victorian graveyards such as Greenwood in New York and Pere Lachaise in Paris.

Like many cemeteries of its time, the Lauren Grove Cemetery is segregated. People of different ethnicity are buried in separate places. There’s even a Confederate section with a memorial for the Battle of Gettysburg. Over 1,500 soldiers are buried there.

City planners in Savannah, Georgia had the blueprints for Laurel Grove Cemetery since 1818 but didn’t get around to plotting the grounds since it wasn’t necessary; the Colonial Park Cemetery still had spaces to fill. Before the land was turned into a graveyard, Laurel Grove Cemetery was a rice field. At the time, people in Savannah believed wholeheartedly in the miasma theory. The miasma theory says that rice fields and cemeteries were responsible for spreading disease thanks to their ‘bad air.’

Many rice fields in Savannah were starting to be considered detrimental to the community’s health, so fields began being paved. For further protection against this bad air, cemeteries and graveyards were moved to locations further outside of city limits, and Laurel Grove Cemetery was as far from the city center as it could get.

As stated above, Lauren Grove Cemetery is segregated. People were buried in different areas based on religion, ethnicity, or political beliefs. Before Laurel Grove, many of Savannah’s African-American residents were buried in the ‘Old Negro Cemeteries’ which Whitefield and Calhoun Squares now occupy. After Lauren Grove opened, many of those original graves were dug up and moved, even though some remained, now under the Squares.

At the old cemeteries, African-American people were buried using African traditions and with symbolic items. Their personal effects were commonly left on top of their graves. After being moved to Laurel Grove, their graves became more European, as the cemetery discouraged traditional practices.

Initially, the headstones at Laurel Grove South were made of wood and degraded quickly. This is why many of these graves are unmarked today. As time went on, stone grave markers became the norm. Laurel Grove South was initially smaller than the North section of the cemetery, but throughout the years, it expanded from its original 4 acres and ballooned to over 90 acres.

Laurel Grove’s North section was reserved primarily for Savannah’s white residents. The cemetery filled up quickly, with Laurel Grove North filling up by the mid-1800s. The headstones in this cemetery are ornate and extravagant, with obelisks and crosses as the norm.

Laurel Grove North is cut through with pathways and open spaces for the public to enjoy the cemetery’s solitude. Many of Savannah’s most influential and wealthiest people were buried here, including most of the city’s mayors. The Silence Memorial is a large statue dedicated to the Confederate deaths in the Battle of Gettysburg. A small area in the North section for Jewish graves also exists in Laurel Grove.

Hauntings at the Laurel Grove Cemetery

Ghost stories have been coming out of the graveyard since its inception. In the 1850s, just after the cemetery was established, a trolley ran through the area and passed by the Laurel Grove Cemetery. Every day, those riding the trolley reported hearing a child crying as they passed the haunted burying ground. They never saw the child but always heard the sobs no matter time of day or how many times they passed the cemetery by.

The trolley workers claim the crying went on for years; strangely enough, they claim that only riders on trolley car #28 could hear the cries. The crying has long since stopped, but the crying child’s mystery has yet to be solved.

While the beautifully ornate headstones and ethereal hanging Spanish Moss might entice visitors to stroll, the spirits that call Laurel Grove home will send you packing. A woman in a wedding dress has been seen multiple times in different places in the graveyard. No one knows who she is, and most people don’t realize she’s a ghost until she vanishes in front of their eyes.

Some of the phantoms at Laurel Grove Cemetery prefer to remain unseen. Visitors have reported the sounds of heavy footsteps around the cemetery grounds, moving in sync with visitors, seemingly trailing right behind them. Visitors feel the sensation of being followed only to turn around and see no one.

Even creepier still, some visitors report seeing disembodied hands reaching out from behind headstones, grasping towards people standing nearby when they’re not paying attention.

Savannah locals familiar with the area claim that Voodoo practitioners use the Laurel Grove Cemetery to perform rituals. A few people have stumbled upon the evidence of these rituals, and since the cemetery is closed after dusk, these claims can be hard to verify.

Savannah is as gorgeous and historical as it is haunted. Many of its haunted locations boast beautiful architecture — like that seen at the Mercer House. The home is now a museum, but it was once home to James Williams, one of the city’s earliest preservationists. Williams shot his lover, Danny Hansford, inside the Mercer house in 1981. The house has been haunted ever since. Or, if you’re looking to visit a home with an even darker past, try 432 Abercorn — as the site of an unsolved triple homicide, the home’s storied past seeps into the present.

If you’re looking for a more up-close and personal ghostly experience, why not book a ghost tour with us and see historically haunted Savannah for yourself?