Historical Hauntings and Spirits on Tap at Tondee’s Tavern 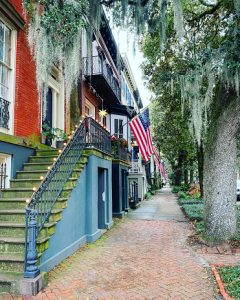 For ghost aficionados, there’s no better place to be than Savannah, Georgia. Pretty much every building has a story and every plot of land is a haunt. Tondee’s Tavern is no different — filled literally to the brim with spirits, it’s truly one of Savannah’s most haunted locations. If you’d like to experience the hauntings of Savannah up close and personal, there’s no better way than with one of our hauntingly fun Savannah ghost tours. Or, enjoy spirits with your spirits on one of our haunted Savannah pub crawls!

Named for one of Savannah’s earliest and most successful taverns, the Tondee’s Tavern building dates back to 1853. The original Tondee’s was located at the corner of Broughton and Whitaker Streets. Savannah’s Sons of Liberty, an early American group of patriots and soldiers used to meet at the original Tondee’s Tavern regularly to unwind. Legend even tells that the original Declaration of Independence was read aloud in Georgia for the first time at Tondee’s!

The current Tondee’s Tavern building is at 7 East Bay Street right in the former home of The Central of Georgia Railroad Bank in 1850. It was taken over (like most of Savannah) by General Sherman and it was made the city headquarters of General Gerry during the American Civil War. The offices of Bryan and sons, which was the largest trader of enslaved people on the East Coast in the 1850s, were located upstairs in the building. The structure also housed the offices of the most powerful and popular lawyers during the 1850s.

The ground floor of the present-day Tondee’s Tavern building was used by the Central Railway and Banking Company. On the upper floor were the offices of Joseph Bryan — the largest slave broker of the time in Savannah. Rumors state that enslaved people were once held in the basement of the building, although this claim hasn’t been verified for sure. Regardless, ‘pens’ used to hold enslaved people were built right outside the back door in Bay Lane.

Peter Tondee was a native of England in the mid to late 1700s, and he arrived with his father and brother in Savannah in May of 1773. When Tondee’s father passed away just a couple of months later in July, he and his brother were entrusted to Paul Amatis, manager of the fledgling silk trade. Custody of the sons transferred to a local magistrate named Henry Parker, but they ultimately ended up with evangelist and founder of the Bethesda Home for Boys, George Whitefield. Peter, who was only sixteen at the time, apprenticed under popular Savannah carpenter James Papot. Tondee then went on to build the first building of the Christ Church and a two-story brick courthouse in Wright Square.

Later, he owned and operated his very own bar — you guessed it — Tondee’s Tavern. It soon became a minor hotbed for revolutionary politics, where men of the time would come to discuss pressing matters over a brew. Two Provincial Congresses met in the tavern, the last of which oversaw the creation of Georgia’s first government.

After Peter’s death in 1775, his wife Lucy took over the management of the tavern and continued to welcome patriots until the British occupation of Savannah in 1778. Lucy herself died in 1785 and in 1796, the first of Savannah’s many devastating fires burned the Tondee lot and the original bar down to the ground.

Georgia patriots met for the first time in response to British policies. Only a few days before, Royal Governor James Wright had issued a proclamation that forbids gatherings from meeting to air their grievances against Great Britain — but as patriots do, they met anyhow, with over thirty representatives from Georgia’s various counties gathering in the tavern.

The meeting was a result of several occurrences over the previous year, starting with the Boston Tea Party in December of 1773. Parliament’s response to the Tea Party was to shut down Boston Harbor and to dissolve the elected Massachusetts government. All the colonies were outraged, knowing that if Parliament could do this to Massachusetts, it would not hesitate to do it to the other colonies as well.

Even though the current tavern is not located in the very first Tondee’s building, it seems as if the haunts have traveled to stay with the Tondee name — Tondee’s reputation for ghosts is almost as strong as the cocktails poured at its dark wooden bar!

Walking through the large glass front doors of Tondee’s makes it easy to feel like you’re stepping back into the past. The beautiful dark wood interior envelops you as you walk the very same steps of patriots before.

Some of the unexplained manifestations at Tondee’s Tavern include strange temperature fluctuations with no apparent cause, disembodied voices, and an overall feeling of being watched.

One spirit, named Catherine, is said to haunt Tondee’s and was a regular of the establishment back in the 1800s. She’s known to mess with staff and visitors, moving their beer mugs or whispering into their ears — nothing too frightening, right?

One visitor to Tondee’s told of her visit to the historic establishment:

“It’s like walking into a time capsule — you can sense the history and the energy stored in the building. While I was there, I sat down for a couple of drinks at the bar and waited for my friend to arrive. After a while, I checked my phone to see if she was okay, if she was on her way, you know, whatever was going on. That’s when i felt a tap on my shoulder. I turned around smiling, because we hadn’t seen each other in so long. No one was there — I got this tap on my shoulder plain as day and no one was behind me. It was a pretty relaxed day, it wasn’t too busy, no one brushed up against me trying to move through a crowd. I have no explanation for what I felt that day, all I know is that Tondee’s Tavern is haunted — like, really haunted.”

Have you ever visited this historic Savannah tavern? Check out our blog to learn more about the haunts of Savannah and the rest of America!