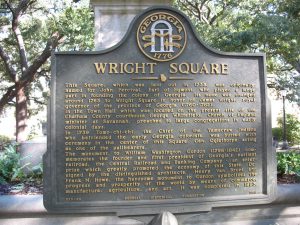 One of four original squares laid out in Savannah’s historic district, Wright Square has a dark past. Cradled by E. York and E. State Streets, the square has witnessed anguish and spilled blood since its beginning. One of Savannah’s first burial grounds were located in Wright Square. At the southwest corner of the square is where the bodies of those first buried here rest. As seen with Madison Square and Lafayette Square, Wright Square was established atop a burial ground — much like the rest of Savannah.

To experience the hauntings of Savannah’s squares up close and personal, book a Savannah ghost tour with us!

The History of Wright Square

First known as Percival Square, Wright Square was laid out in 1733. The square was originally named after John, Lord Viscount Percival, Earl of Egmont, who played a large part in the founding of Georgia. Around 1763, the name was changed to reflect the name of Sir James Wright, the last Royal Governor of the Province of Georgia. Wright Square was even once referred to as Post Office Square, Courthouse Square, and even darker still, ‘Hanging Square.’

Since the early days, Wright Square was a gathering place for people of all kinds and it soon became the location of monthly auctions, the courthouse, and more. In 1739, Yamacraw Chief Tomo-Chi-Chi offered cooperation and peace with the colonists of early Georgia and he was later buried in the center of the square after his passing. There was a stone pyramid built in the square to honor him and was marked as Savannah’s first monument.

Over 100 years after, well-respected politician and businessman William Washington Gordon was also given memorial in Wright Square. It was designed by architects Henry Van Brunt and Frank M. Howe. To make way for the new memorial, the city desecrated the grave of Tomo-Chi-Chi, the one who was responsible for Savannah’s early safety and success. They disrespectfully and unceremoniously removed his remains and scattered his bones around the square during the process. Thankfully, some of Savannah’s preservationists recognized just how terrible the act was and a new monument was built — it was made of granite stone and placed in a beautiful corner of the square.

In the midst of winter of 1733, Alice Riley, her husband Richard and thirty-eight other Irish servants barely survived the long and cold voyage to America. They had just spent weeks upon weeks on the unforgiving ocean, nearly dead from starvation — famished and distraught. Upon their arrival in Georgia, Alice and Richard worked for William Wise who owned cattle on a farm on Hutchinson Island.

William Wise was a terrible and tyrannical man, difficult, mean, and stubborn. Mr. Wise would actually order a couple of his servants to bathe and groom him every day. During March of 1734, Mr. Wise was found dead on his bed, his head resting in a bucket of water with a handkerchief tied around his neck. He was the very first ‘murder’ victim of Savannah. Strangely enough, Alice and Richard were missing from the farm once authorities started to snoop around for clues on what had happened to Mr. Wise.

It turns out that Alice Riley and Richard were fed up with working for Mr. Wise. They were being mistreated and they felt they needed to do something about it. After the murder, Alice and Richard fled the farm and were found later on the Isle of Hope in hiding. Alice and Richard were both sentences to death for the murder of Mr. Wise. Just before the time of her hanging, Alice was discovered to be pregnant with the deceased Mr. Wise’s baby. She had admitted to being raped multiple times by William Wise during her time working for him. The magistrate decided to wait until her baby was born to hang her, and not a few minutes after her child was born, she was hanged on January 19th, 1735, leaving her newborn an orphan.

Alice was left on the gallows for three days. She maintained her innocence until her final moments. Sadly enough, her child, named James, also passed away two weeks after his birth. Alice and James were bother buried in a plot just off of Wright Square.

Could Alice and Richard have been victims of the anti-Irish prejudices of them time and been framed for Mr. Wise’s murder? Possibly. The acting magistrate, Thomas Causton, was known to manipulate trials that agreed with his superiority beliefs and prejudices. Or, perhaps Alice and Richard murdered Mr. Wise to stop the cycle of abuse that they were experiencing.

The Spirits of the Square

After the death of Alice, unfounded claims were being passed around about Alice and it was rumored that she had practiced witchcraft and black magic. Another rumor stated that Alice had put a ‘curse’ on the other residents of Savannah as she was being hanged. It’s believed that the residual energy from her curse is why Spanish moss doesn’t grow on the trees in the square. One old saying tells of why that may be:

‘Spanish moss will never grow where innocent blood has been spilled.’

Reports come from the square today that tell of Alice’s spirit. She is said to appear to mothers who are carrying their babies and attempts to take them away, out of their arms. Others state they see a woman who seems to be searching for something — could this be Alice looking for her baby, James? She is said to scream for help, begging you to help her find her son, but as soon as one turns around to look, she vanishes.

There’s even police reports of people calling the authorities to report a woman who is searching for a missing child. She’s usually spotted in period clothing. Alice’s apparition appeared to more people than any other ghost in the City of Savannah. She’s the single most reported apparition in the entire city. Alice’s apparition is seen most in the earliest hours of the night, just as the sun is setting.

Tomo-Chi-Chi is also said to wander the square, as people report seeing the apparition of a tall, Native-American man who slowly paces the square before he fades away.

If you’re looking to encounter Alice, or perhaps Tomo-Chi-Chi, then maybe a visit to Wright Square is ‘wright’ for you. As one of the most haunted places in Savannah, it’s no surprise its also one of the most popular! If you’d like to learn about all of the haunting history of Savannah with a first-hand perspective, why not join us for a ghost tour? For more about haunted Savannah and other spooky locations all across America, check out our blog here!