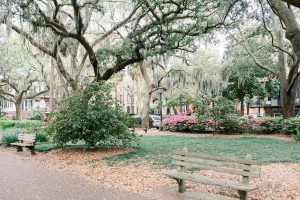 Savannah’s got a reputation for ghosts — pretty much everywhere you look in the Hostess City is reportedly haunted. As any of Savannah’s residents will say, Calhoun Square, or Massie Square, is chock full of all sorts of ghostly activity. From disappearances to murders, Calhoun Square is one for the books — the square has been left with a pretty deep scar from its past.

The hauntings at Calhoun Square aren’t just sequestered to the 1800s, either. As recently as 2000 there was a horrible discovery by a local gas company. As they were demolishing the sidewalk to access gas lines in front of the Massie Heritage Center, they discovered a bunch of human bones. Within minutes the construction zone was roped off with police tape and had turned into a crime scene. It was discovered that the bones were over 200 years old and belonged to a few enslaved African-American people who had been brought to Savannah as slaves. They were buried for centuries right beneath the feet of everyone who visited the square.

The Haunting History of Calhoun Square

Calhoun Square is situated right on historic Abercorn Street, the same one that haunted 432 Abercorn sits on. Calhoun Square was one of the final three squares to be laid out in Savannah in 1851. While Savannah is famous for its parks and squares, Calhoun is unique — it’s the only one that has all of its original buildings intact.

Calhoun Square was named after John C. Calhoun — he was a South Carolina statesman who served as vice president for John Adams and Andrew Jackson. Calhoun was selected in 1957 as one of the ‘five greatest senators’ in American history, but he remains a controversial figure due to his pro-slavery stance.

Even today, in the wake of the racially-motivated shooting at the Emanuel African Methodist Episcopal Church, people petitioned to remove monuments that were dedicated to Confederate figures. That same year, the monument to Calhoun was vandalized. Calhoun Square’s namesake just adds more fuel to the ominous fire that has been blazing there since the 1800s. Its history is written in blood. Upon their deaths, slaves were brought to the land at Calhoun Square and disposed of without coffins, totally inhumanely. It’s estimated that around one thousand enslaved people are buried beneath Calhoun Square. Maybe the spirits of the people buried here cannot rest because the very ground they’re buried under is named after the man who advocated for their enslavement.

Peter Massie donated $5,000 to build the Massie School for the ‘education of the poor children of Savannah,’ and the school opened its doors in 1865. The school finally closed in 1974 but it began operating as a museum and resource center the following year. Entering the center is like stepping back to the nineteenth century.

The center also teaches about Savannah’s history from the European settlements on the creek to the Yamacraw people who lived in the area long before. There are exhibits of period clothing, photographs, local history, and preservation plans.

Wesley Chapel was Savannah’s first and was established in 1807. It was dedicated to Charles and John Wesley — John founded the Methodist denomination while Charles wrote the words to a handful of Christian hymns including ‘Hark! The Herald Angels Sing.’

In 1874, plans were set into motion for the construction of a new church on Calhoun Square. The plans for the Wesley Church were drawn up by architects Dixon & Carson. Ground was broken in the summer of 1875 but the Yellow Fever epidemic and financial woes slowed progress. It was fifteen years before the church was completed.

Wesley Espy was the son of a federal judge and the story says that he fell to his death from a tall porch at the Epsy family home, at the corner of Abercorn and East Wayne. According to rumors around the town, Carl, Wesley’s father, was associated with bootleggers. He was known town-wide for his temper and reportedly ruled his home with an iron fist. Wesley was the opposite — a deacon at the church and the boyfriend of a nice churchgoing girl. In a bizarre twist of fate, this girl was actually the girlfriend of one of the bootleggers that Carl was involved with. He begged his son to stop seeing the girl as the bootlegger had an even worse temper than he did. Wesley refused, and was found hanging from the porch of his family’s home, retaliation of the bootlegger. In the early morning hours, Wesley’s spirit is said to appear on the family porch, watching over the square he once called home.

The story of Mr. Wilson and the way he treated his children after his wife died has no substantial records, a tale based off of nothing but whispered rumors. Nonetheless, the story may hold some historical fact — although how deep that fact goes in unknown. According to reports, Mr. Wilson’s punishments went beyond spanking, they were said to be cruel and downright inhumane.

The story begins quite innocently, with Mr. Wilson’s daughter was seen playing with students of Savannah’s Massie School, a school whose population was mainly orphans and African-American students. Mr. Wilson was displeased with this, and disapproved of his daughter interacting with kids of a ‘lower class.’

When she arrived home that day, she was berated and screamed at until Mr. Wilson thought his message was received. She ignored him, a girl ahead of her time. The next day she went back to play with her Massie School friends. It wasn’t too long before Mr. Wilson found out and started to formulate a punishment for his daughter.

He is said to have taken a chair and placed it in front of a window that overlooked the Massie School grounds. He then dragged his daughter to the chair, tying her wrists and ankles, trapping her in the chair. She cried and screamed to no avail.

He left her tied there for days to watch her friends play without her, ignoring her cries and leaving her to bear the heat of one of Savannah’s hottest heatwaves, her body roasting in her room.

It is said that she was imprisoned for several days up in that chair. When Mr. Wilson finally entered the room to free her, he untied her from the chair and she fell to his feet, lifeless. He had killed his own daughter.

No charges were ever filed against Mr. Wilson, as his standing in society protected him. His crime was swept under the rug, with no reports ever being made in any newspapers. Mr. Wilson couldn’t forgive himself for what he had done — he was so distraught knowing he was capable of such a heinous act.

Mr. Wilson wasn’t the only one who couldn’t forgive himself. His daughter’s spirit is said to have remained in the home, tormenting her father, serving as a constant reminder of what he did. A week of this haunting had gone by before it was too much for Mr. Wilson to bear. He trudged up the stairs to his daughters room, revolver in hand. The chair his daughter died in still faced the window. He sat down, rose the gun to his head and pulled the trigger — ending his own life in the same place he ended his daughter’s.

Another haunting tale told of the home is that of a triple homicide. It was the early 60s when a husband and wife were living in the home with their two daughters. Around the holiday season, the couple invited some friends to stay at their home with their own two daughters in tow. During the evenings, the children would be left at home alone without any supervision while the adults went out on the town. When they arrived home, they were met with a sight that they couldn’t soon forget.

When they entered the home, it was eerily quiet. They entered the children’s room to discover three of the girls viciously murdered. Their bodies were bloodied, the fourth child was later found in a closet, frozen in fear.

Some say that the current owner of the home is the survivor of the night and that she believes the house is cursed. She doesn’t even live in the home, but vows to keep it unoccupied for as long as she lives.

Another bizarre tale tells of a college student who stayed at 432 Abercorn during their school year. One night he disappeared, never to be seen again. Some believe that there is a ‘portal’ at the house and that he ended up slipping into it. Another rumor tells of Anton LaVey, the founder of the Church of Satan, trying to buy 432 Abercorn to use it as an east coast branch for his church.

If you’re looking to visit the most haunted places in Savannah and learn ore about the history behind them, why not join us for a ghost tour?