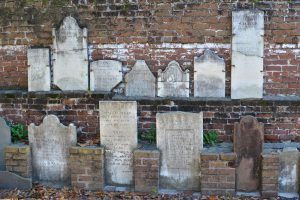 Why is Savannah considered one of America’s most haunted cities? While this may seem to be a rather complicated answer, the simplest argument is basically because of its history. Savannah, founded in 1733, is a storied chronicle of this country’s history, of the injustice of slavery and ferocious battles, serving as the setting for wars fought during the Revolution through the Civil War. This land, as beautiful as it is draped in Spanish moss and tinted with the scent of magnolia, has absorbed the blood of many souls throughout the years. Savannah also witnessed feverish epidemic outbreaks and murders that further added to the anguish that stains the ground. Because of this savagery and disease, the city of Savannah can be considered one giant cemetery. It is out of this history that ghosts are created and unleashed, some of which step out of the past and into the modern world that haunts the living to this very day.

Want to explore the hauntings of Savannah for yourself? Book a hauntingly fun and historically accurate Savannah ghost tour with us!

Cemeteries serve as silent testaments, bookmarks in the pages of the past. Etched in stone are the names of those who existed within a certain historical period. They recall the deeds and misdeeds of those who called Savannah home or met their deaths while in the city.

The battlefields and monuments that dot Savannah are reminders of the brutality necessary to secure the peace of our nation. They are a sacred tribute to those who paid the price of freedom with their very lives. Long after the echo of the last cannonball faded from memory, the spirits of those, who gave everything still remind us of past events that shaped America into what it is today.

Why Are Cemeteries So Haunted?

Cemeteries and the repository of memories, a place where bodies are interred, but history continues, out of time and space, allowing a glimpse into the past. From a ghostly perspective, most cemeteries are not actually haunted. This is a hallowed place of eternal repose, and the spirits of those buried have usually crossed over and no longer linger in this earthly realm. So why is it that some cemeteries are haunted, and why, more importantly, are so many of Savannah’s cemeteries the haunting place of so many restless souls? The answer tends to be that cemeteries are haunted by those who still have some unfinished business with the living. Those who have been murdered often wander long after their bodies have been buried until their killer is brought to justice. Some ghosts prowl about because they were wrongly blamed for some transgression while alive. Many specters are said to manifest in the shadows due to some tale yet to be told. In Savannah, so many of these restless souls remain due to some injustice yet rectified in this world of the living.

The Bonaventure Cemetery is over 150 years old and the setting for a few hauntings. A little girl named Gracie Watson is one of Bonaventure Cemetery’s most famous residents. She is said to have succumbed to pneumonia at the age of six. Her ghost is said to reside in the statue carved in her likeness. Visitors to her grave occasionally leave coins and toys. Some say you can hear the little girl crying whenever someone removes her gifts. Many have witnessed tears of blood flowing from the statue’s eyes.

Before we pay our respects and leave Bonaventure Cemetery, it is also best to mention the rumor of a pack of ghostly dogs said to protect this cemetery from trespassers. People have heard disembodied barking and snarls, and some have even been chased from the cemetery by a pack of these spectral hounds!

Laid out originally in 1750, the Colonial Park Cemetery is the oldest remaining cemetery in the entire city of Savannah. The cemetery sits on a mere six acres of land yet contains over 10,000 bodies. Many of those buried here have been forgotten, their stones long eroded away. This cemetery may be haunted by the spirits who wish to be remembered even after they have left their earthly bodies behind. In 1820 there was a Yellow Fever outbreak that struck Savannah. There is a rumor that 666 people died during this epidemic, which alludes to a more sinister cause of the deaths. Some of these folks, who were taken by this disease, are alleged to manifest in spirit form in this cemetery.

The most famous ghost to inhabit this cemetery is the spirit of Rene Rondolier, who was born in Savannah in 1777. Like many serial killers, he started out by torturing and killing small animals before moving on to human prey. Rene was a child killer. When he was captured for his crimes, Rene was hanged on the Hanging Tree, which still grows in the confines of the cemetery. It is said that on clear nights you are able to see Rondolier still hanging in the tree.

Although planned as early as 1818, Laurel Grove Cemetery first opened for burials in 1853. This cemetery includes the original one meant only for white people, now known as Laurel Grove North, and a companion burial ground, Laurel Grove South, that was reserved for slaves and free people of color and held the graves of thousands of people from Georgia’s coast.

Among the famous personalities laid to rest here are Girl Scouts Founder Juliette Gordon Low, 24 different Savannah Mayors, a US Supreme Court Justice, and more than 1,500 confederate soldiers killed in the Civil War. But the most famous resident is the unnamed ghost of a young woman still dressed in her wedding gown, seen walking the grounds of this cemetery, seemingly looking for the earthly love she lost while alive.

Because Savannah is so old, we must remember that some cemeteries are all but forgotten, and some are lost to memory altogether. Many of them were mere burial mounds for slaves. Two of Savannah’s Negro Burial Mounds were paved and turned into town squares, then renamed after two Confederates. There are also countless Native American burial sites around the city, alluding to a history unknown by those who settled in this area. The most well-known aboriginal burial is located on the Yamacraw Bluff, where most of the historic district is built. The bluff was the burial site of the Yamacraw people and, previously, the Muscogee. Ghostly natives have been seen throughout the streets of Savannah, a residual reminder of the city before it was taken from them.

There are also two Jewish burial sites in Savannah. One has since been paved over, though it does have a marker. There are also countless other burial sites hurriedly created to bury those killed in wars or who died during various virulent disease outbreaks. Many of the forgotten burial sites are called to mind by the ghostly inhabitants of those who still linger within the confines of Savannah.

Savannah is not only the burial place for many who have fought and died in the battle for this country, but the city also memorializes these veterans in various grand monuments. Out of this crucible, many ghosts have been created and still wander the city of Savannah as spectral reminders that freedom often comes at a terrible price.

Why are battlefields so haunted?

Battlefields are places where man’s inhumanity to man is on display in moments of sheer violent brutality. It is the site for a massive loss of life in a very short time, and many of those who were cut down was in the prime of their youth. Some ghosts that wander battlefields are residual haunts, embedded into the very fabric of the environment as their emotions and pain, and confusion are imprinted onto the world. Some of these ghosts are also intelligent, wandering about and illustrating the horrors of war. Some hauntings tied to a particular battle are also witnessed attached to a particular memorial for the war in which they fought. This is a common occurrence in Savannah.

Known as the second bloodiest battle of the American Revolutionary War, the Siege of Savannah was waged within the city’s west side in October of 1779. The French and Colonial soldiers tried to retake the city of Savannah, but the advance was repelled by the British.

During the fighting, the French and Colonists took almost 1,000 casualties. The British noted some 150 fatalities. Madison Square is thought to be the location of a mass grave of casualties from the battle of Savannah and is the settling for many ghostly manifestations as well as phantom gunshots and cannon fire. Orbs have been photographed on this site, and many visitors have witnessed shadowy figures roaming about.

Within a tree-lined square lies the monument that pays tribute to General Casimir Pulaski, killed in the Siege of Savannah. At his monument, it is here that Pulaski’s seemingly intelligent ghost is witnessed. Sometimes he is seen strolling the grounds around his monument. At other times his ghost is said to have the tortured countenance of one still at war. Whichever version of his ghost you may stumble upon, remember the courage of the man who lost his life preserving the sovereignty of Savannah.

Honoring the men and women who served during the Civil War, a 48-foot-tall monument was dedicated in 1875 in Forsyth Park. But this area seems imbued with the spirits of many veterans who gave their lives. Ghosts in full uniform are seen under the moonlight to stand guard around this monument, protecting their ideals in the afterlife and assuring that those who have died in the war have a fitting vigil forever. Maybe it is true that old soldiers never die.