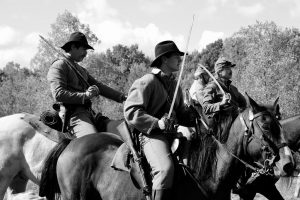 Most Americans know just how haunted the city of Savannah is. It was ground zero for battles during the Revolutionary and Civil wars, it witnessed countless enslaved people tortured here, and is chock full of ghost stories stemming from tragedies of the past.

The Low Country is one of a kind, oozing in southern spirit and spirits. From the haunted Andrew Low House to the entire street of Abercorn, Savannah’s city center and surrounding neighborhoods are some of the spookiest in America — could it be because the entire city is built atop burying grounds?

One of the more sinister locations is Fort McAllister, about thirty miles south of the city. Situated along the tranquil Ogeechee River, Fort McAllister was built upon the original plantation of Lieutenant Colonel Joseph Longworth McAllister — whew!

McAllister actually perished in the war during a Civil War battle in Virginia. He died in 1864. During the fort’s history, four battles were fought there. It was used as a fortification for the Confederate army. Because of the fort’s extremely strategic location along the river, there was always at least one waterway that could be used to bring supplies in and out. It even made it difficult for opposing forces to enter or leave the city.

Location aside, the weapons at Fort McAllister were ahead of their time and truly foreboding. The fort had ten huge guns as well as a place for what they called the ‘Red Hot Shot’ which was a cannon that shot cannonballs that were so hot they would set wood on fire almost instantly. All of the artillery at Fort McAllister was more than enough to defeat any Union ship entering the Ogeechee River.

Between the years of 1862 and 1863, the fort warded off seven attacks by Union forces. The Union kept making the mistake of attempting to storm the fort by sea, because it had been built with water attacks in mind. Eventually in 1864, the fort finally gave way.

On his way across the Peach State, Union General William Tecumseh Sherman found his way to the outskirts of Fort McAllister. His troops were suffering, malnourished and desperate. Sherman sent calvary south to the fort and ordered that his men would take the fort with a single, sudden attack. With the element of surprise on their side, the army entered a narrow strip of land that did not allow for much movement called Genesis Point, and caught the confederates totally off guard.

Sherman stood across the way at the Cheves rice field and watched the battle from his hidden seat. The battle only lasted for fifteen minutes. Since the fort was not meant to be attacked from the land and was not built to withstand that type of damage, there was little that the Confederates could do to defend it. Confederate Major George W. Anderson conceded to the Union and Sherman came in to take over the fort and the city of Savannah.

During all of the battles seen by the fort, Union and Confederate forces lost more than just a few hundred men. In the fifteen minute battle by land, seventy-one Confederate soldiers were dead. That’s seventy-one deaths in one single place. Some of the battle was extremely brutal, with muskets and hand-to-hand combat.

After the battle, Fort McAllister was then used as a prison for Confederate soldiers who were captured along the coast. It stayed that way, a prison camp, for the rest of the Civil War. One can only imagine how the prisoners were treated there. Prisoners were often used to do the tedious and arduous tasks that Union troops avoided like digging land for torpedoes. While no recorded casualties came out of the prison, it’s no cake walk for a soul to be locked up there until they die.

Over the years, rangers at the fort have reported all types of ghostly happenings in and around the fort. The most disturbing of these involved a park employee who witnessed a headless soldier standing near the fort. This spirit is believed to be that of Major Gallie, a Confederate who was killed during the land battle at the fort. He appears mostly by the cannon where he was decapitated, and he is accompanied by an icy cold air. Other mortally wounded soldiers are also seen around the fort, missing arms, legs, while others are covered in bullet holes.

In the 1930s, Henry Ford, the one responsible for your great-grandfathers Model-T, had the fort repaired and rebuilt since he owned the nearly 5,000 acre plantation nearby. He asked the men working on the fort to stay there during the night as he wanted to avoid looting of the job site.

Those who did stay at the fort complained of disembodied voices, people shouting military commands, the feeling of being watched and followed, and much more. There were even deafening sounds of cannon fire as well as groaning.

There even roams a phantom feline at the fort, lovingly named Tom Cat, following visitors and guests, perhaps just looking for a bit of attention and adoration in the afterlife. Many have seen the cat running through the fort, only to disappear when they try to catch up to it. The cat also tends to rub up against the legs of unsuspecting visitors before vanishing and leaving the tourists with several unanswered questions.

A Bit About Tom Cat

“Camp mascots were common place in the Union and Confederate encampments during the Civil War. Soldiers on both sides of the conflict were known to adopt all kinds of mascots to help relieve the monotonous rigors of camp life. “Tom Cat” was Fort McAllister’s cherished mascot. “Tom Cat” was a coal black cat that was loved and adored by the fort’s defenders. It was reported that “Tom Cat” would run back and forth along the fort’s defenses during the maelstrom of combat. Each time, “Tom Cat” would wager one of his nine lives dodging the wall of lead cannon and musket balls that flew overhead. On March 3, 1863, “Tom Cat’s” luck had finally run out. In the heat of battle, a stray round found its mark, killing the post’s most cherished occupant.”

We apologize for ending on such a sad note. As for Fort McAllister, it operates as part of a public park that closes at dusk. If you’re looking for ghost stories, speak with one of the park rangers — perhaps they’ll have a tale or two for you. Fort McAllister has seen blood, battle and death before it was turned into a tourist attraction. The spirits of the soldiers that lived and died here remain, showing up in the form of orbs, apparitions, and even just a strange cool breeze in the heat of the Georgia summer.

If you’d like to get up close and personal with some of Savannah’s most haunted hotspots, our ghost tour is right up your alley. Day or night, rain or shine, we offer our haunted Savannah tour daily. Visit our website to schedule your tour or to check out the rest of our blog!