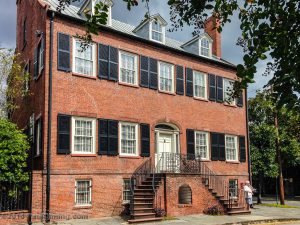 As one of the most important historic sites in all of Savannah’s historic district, the Davenport House was one of the first to be restored and even served as the headquarters for the Historic Savannah Foundation. The home is surrounded by mystery and intrigue, which is no surprise, since it sits right in the middle of the historic district in the oldest city in Georgia.

A Bit About The Davenport House

The Davenport House was built by a strange and mysterious architect by the name of Isaiah Davenport. He built the home in 1820 to house his family and numerous enslaved people. After his death, the building changed its face and served as a boarding house, his widow renting out rooms to make ends meet.

The story of the Davenport House is one of female empowerment, as Sarah Davenport had to take complete charge of her husband’s finances and assets in order to provide for her family. She took on roles that were extremely out of place for women in the 19th century, like selling property, handling finances, and settling debts.

In 1955, the abandoned home was set to be demolished — it was an eyesore in the neighborhood, an old and withered shell of its former self. A group of seven women heard of the news and banded together to save the Davenport House, creating the Historic Savannah Foundation in the process. Today, the Davenport House is a busy museum and even offers tours with a unique reenactment of the Yellow Fever epidemic that swept through Georgia in the past.

The Davenport House is quite loved in the area, but also quite haunted! Despite the museum’s strict no-pet policy, visitors report a phantom tabby cat that follows guest’s feet as they explore the home. Guests also see the spirit of a young girl standing at the windows or playing outside in the yard. While her identity is unknown, she is thought to have passed from Yellow Fever, as the Davenport family lost quite a few of their children to the disease. Many of the boarding house tenants also contracted the fever while living at the home.

Isaiah Davenport and His Namesake House

Isaiah was a truly mysterious figure — no photos exist of him and very few records and descriptions tell of his life. Even with this, he was still known as Savannah’s Master Builder and constructed several buildings ans homes around the city.

Davenport was born in Rhode Island and made a living as an architect, fireman, alderman, constable and a member of the city’s Board of Health. A man of many titles, he kept a private life despite his influential standing.

Isaiah moved to Savannah in 1808 after spending several years as a carpenter’s apprentice in New Bedford, Massachusetts. He met his lovely wife Sarah that very same year. He started construction on his first home, the Laura Cottage on East State Street in 1808 as well. In 1820, Isaiah got to work building the infamous Davenport House. He incorporated much of popular southern and Georgia-inspired architecture into the building, and there was truly no other architect who matched his skill set. At the time, many of Savannah’s residents considered the Davenport House to be the epitome of southern architecture.

After the Great Savannah Fire in 1820, the city of Savannah contracted Davenport to build temporary shelters. He was chosen for his superior craftsmanship and attention to detail. He was also a trusted member of the community due to his past as an alderman and fireman for the city.

In 1827, Isaiah died from Yellow Fever at the age of forty-three. He was originally buried at the Colonial Park Cemetery but was later exhumed and moved to Laurel Grove Cemetery, which is said to be one of the most haunted cemeteries in the state.

Sarah Davenport and The Boarding House

Isaiah left behind a wife and several children. The two originally had ten children, but Sarah was only left with six by the time Isaiah died. Now a widow, Sarah was in charge of taking care of six children, several unfinished projects, unpaid debts, and numerous properties that needed looking-after.

She had few options for income. Sewing or teaching weren’t enough to pay the bills, so she began to utilize the large home and rented out rooms. On a darker note, she also began to rent out the enslaved people that lived at the home. In order to pay off her husband’s debts, she sold several of his properties and oversaw the construction of the sawmill he intended to build. She was very financially stable without her husband, and actually prospered after is death.

While her story tells of empowerment, she was only able to prosper due to her privileged status, her late husband’s position in society, her wealth, large property, and her ‘ownership’ of enslaved people.

Sarah sold the Davenport House in 1840 to the Banyan Fsmily for $8,000. They held onto the home for over a century, and sold it in the 1940s. The Banyans had abandoned the home well before that time, though — the home had become rundown sometime in the 1930s. Despite its neglect, many still revered the home and recognized its architectural beauty. It was later listed in the Historical American Buildings Survey.

Spirits of the Davenport House

Pretty much every building in Savannah, especially the historic district, has reported hauntings. A few spectral guests still call the Davenport House home, and visitors report a variety of sightings and unexplained occurrences. Phantoms footsteps and disembodied voices are the most commonly reported happening, while on rarer occasions, guests claim to feel unnaturally cold areas inside the home. A grey, hazy mist is also seen appearing near the gift shop and those who witness it say that it takes on an unsettling humanoid shape.

Visitor’s favorite entity is that of a ghost cat, an orange and white tabby that roams around the building. No one knows who the cat belonged to in life or when it arrived in the building, but it’s here to stay! The phantom feline is known to randomly appear as it follows the museum tour guides around with their groups. It keeps a watchful eye over museum guests, making sure none stray from the group! Guests are fooled into thinking the cat is just a pet up until it vanishes before their eyes.

Museum staff have researched the girl’s identity, but they have yet to come to any concrete conclusion. The Davenport Family lost four of their children, and countless families came and went during the home’s tenure as a boarding house.

The Davenport House is just one of the gems of history. With multiple ghosts attached, the home remains one of the most visited haunted hotspots in the city. Guests flock to the museum to learn more about the Davenport family, the strangeness of the spirits there, and for the haunting history that Savannah continues to provide time and time again.

For more haunted Savannah, check out our article about the historic Marshall House, the oldest operating hotel in Savannah!