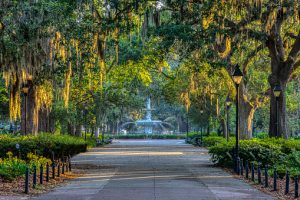 Why is Savannah so haunted? That’s one of the first questions to cross the minds of those learning about the Hostess City of the South. Could it be the sheer age of the city? Sure. However, it’s more likely due to the fact that Savannah was built right atop the battlefields and burying grounds of times gone by. Just how many battles happened right on Savannah’s soil? Read on to find out!

The Seige of Savannah

In October, 1779, the French and Colonial soldiers were fighting to regain control over the city. During the course of the fighting, the Colonists and French soldiers were hit with close to 1,000 casualties. Spring Hill is where the bulk of the battle took place, but there is evidence that some of it happened at what is now Madison Square.

During the Revolutionary War, two major battles were fought right in the heart of Savannah. Both of them were bloody with heavy casualties and tragedy. Not only that, but both occurred in the area that would later become Madison Square. It’s even said that the area was a burial site and mass grave for soldiers who had perished in the war. The saddest part? Some of the soldiers thrown into the mass grave weren’t dead, just wounded and buried alive. One can only imagine the energies that were trapped within the ground.

These days, Madison Square is a picturesque and peaceful place, and if it weren’t for the statue of William Jasper, no one would ever guess that battles had taken place there. People visit the square to enjoy a sunny day or socialize, not realizing that there are hundreds of bodies buried just below their feet.

In the center of the historic square sits a large, looming statue of William Jasper. He was considered a war hero who died while raising the flag of his regiment. He did not perish until the flag was raised after he was mortally wounded, honoring his fellow soldiers during his final moments on earth. Locals tend to call Madison Square ‘Jasper Square’ instead, to honor his bravery and commitment to his brethren.

Old Fort Jackson played a huge role in the Civil War in Savannah.

Old Fort Jackson was great at defending seaside, but land-based attacks were just too much to handle. General Sherman began his famed ‘March to the Sea’ in late 1864 after he captured Atlanta. Sherman began his advance towards the coast and followed a ‘scorched earth’ policy where anything even remotely useful to his enemies was destroyed on sight. His troops burned bridges, stockpiles of food, ammo, and even liberated tens of thousands of enslaved people. Sherman’s men then betrayed the freed slaves as they crossed Ebenezer Creek.

In December of 1864, Sherman and his army finally arrived at the coast. Before they marched into Savannah they surrounded it, forcing the mayor to surrender. The first order? To capture Fort Jackson. The Confederate soldiers at the fort were forced to flee, leaving the fort abandoned. After the Civil War, the fort was barely used. The name was switched in 1884 to Fort Oglethorpe but was changed back in 1905. The city of Savannah bought the fort in 1924 with plans to turn the land into a gorgeous public park. The fort was restored in the 1970s and is now a museum open to the public. The museum does Civil War reenactments and daily cannon demonstrations! It was declared a historic landmark in 2000.

Before General Sherman captured the fort, a new recruit named Patrick Garrity was charged with guarding the fort’s drawbridge. He hated his superior, George Dickerson. No one is sure the reason for his disdain for the Lieutenant, but many speculate that Dickerson was anti-Catholic and anti-Irish, mistreating Garrity and his peers for their beliefs.

One night as Dickerson was headed back to the fort, Garrity seized the moment and snuck up behind the Lieutenant and hit him in the head with his musket. He broke his skull in four places. Dickerson hit the ground and Garrity just kept hitting him until he broke his musket.

Nearby soldiers noticed the attack and Garrity dropped his gun, taking off for the Savannah River. He was too tired to swim and ended up being overtaken by the strong current. He drowned. Dickerson survived the attack and woke up minutes later. He ended up stepping down from his post.

These days, Private Garrity’s ghost roams the fort. He often appears in the same spot that he attacked Dickerson. At first glance, visitors think his spirit is part of the war reenactment crew since he is seen in Confederate attire. He’s only visible from the waist up, startling those who see him.

Only a few places across America have seen more bloodshed than Savannah. The Siege of Savannah was it’s bloodiest moment, and the casualties and otherworldly carnage that took place could lend to the belief of Savannah being America’s most haunted city.

As you can see, more than just one horrific battle has taken place in Savannah. It seems as if this city oozes tragic history, with every stone uncovered releasing yet another battle, another death, another haunting. If you’d like to experience these hauntings and history first-hand, join us for a ghost tour. Our tours are history-based, with fact instead of fiction being the backbone of our stories. Perhaps you’ll even encounter one of these battlefield casualties for yourself.