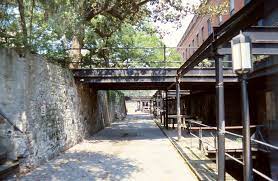 Are you visiting Savannah and looking to check out all the boutique shops, art galleries, and restaurants? Factor’s Walk may be your best option! One of Savannah’s most popular tourist destinations, Factor’s Walk is a grouping of markets and shops that have been around since the 18th century.

With all of the hustle and bustle that goes on there, some stories of the ghostly kind have slipped beneath the cracks. Read on to learn the history of this shopping and ghost-spotting destination!

Factor’s Walk is said to have been part of Savannah since the early 18th century. The first buildings on Factor’s Walk were built in the 1820s, but the market existed there before buildings were ever erected. It was a marketplace where various goods like cotton were sold, and bulk deals were made. However, it was also a marketplace for buying and selling enslaved people.

You may be wondering how Factor’s Walk got its name. Since it was a place where cotton goods were bought and sold, those who set the price for cotton were known as ‘factors.’ Despite the Civil War ravaging the country and city, Factor’s Walk continued to grow and develop as the place where the city’s business was done. Think of it like a mix between an 18th-century wall street shopping mall combo.

Just because the environment of Factor’s Walk is bustling and noisy doesn’t mean that the spirits here hide in the shadows.

River Street, steps away from what is known now as Factor’s Walk, is another of Savannah’s tourist hotspots. River Street is one of Savannah’s most popular stops. Its boutiques, restaurants, and historic allure draw visitors from all over the country. Its old cobblestone streets tell a story of a dark past, however. If we step back a few hundred years, we’ll see enslaved African people being shuffled into stone tunnels to be traded. Immigrant workers were loading up cargo ships with cotton. Thieves and drunkards were hanging out in the darkest alleys along the street. The same buildings that stored cotton and enslaved folks are now the hotels, offices, and cafes seen today.

Countless people died while working the docks and were either crushed by the massive bales of cotton or worked to death until they succumbed to exhaustion.

During their early years, Factor’s Walk and River Street were some of the worst places one could find in all of Savannah. The crime was an infestation that couldn’t be treated.

A stark contrast from the Factor’s Walk seen today.

Aside from the numerous shops and venues, Factor’s Walk has a few more hidden discoveries. The entrances of various underground tunnels located in the area are roped off but visible when walking down Factor’s Walk. These tunnels are said to lead to different parts of the city and end in the basements of buildings. The tunnels are rumored now to be occupied by a few spirits that once used them. Men’s loud, booming voices can be heard echoing from the sealed-off entrances.

Some believe these voices are actually spirits of enslaved people, as they were bought and sold and transported through tunnels near Factor’s Walk.

During the night, visitors to Factor’s Walk have seen an extremely tall and shadowy figure that hovers around or stands menacingly. Others have been followed by this entity, claiming that a cold rush passed them as the entity disappeared. The cobblestone streets and pathways of Factor’s Walk hold every energy that has passed over them, absorbing even the darkest secrets of those who walked there before.

Not all of the spirits who reside at Factor’s Walk are believed to be enslaved; over the years, Factor’s Walk has seen its fair share of tragedy.

One of the tunnels at Factor’s Walk leads to the Moon River Brewing Company. This was one of the very first buildings erected in the area. It was constructed in 1821 as a hotel and was a gathering place for the well-to-do citizens of Savannah. That changed when General William Tecumseh Sherman captured the city and occupied it with his Union soldiers in 1864.

The building was one of several used as a field hospital for treating Union soldiers. It also served as a treatment facility for those afflicted with Yellow Fever. There had been several deaths in the building as a result.

A spirit known only as ‘Toby’ is said to haunt the Moon River Brewing Company, and he hangs around the basement area. If I a visitor comes too close to the basement stairs, he’s said to whisper ‘go away’ or give them a slight nudge in the opposite direction.

Another spirit of Moon River is a woman named ‘Mrs. Johnson.’ She appears dressed in period clothing and stares at patrons from the top flight of stairs.

While visiting Savannah, we suggest you stop at its most historic pubs, restaurants, and shops to get a first-hand feel for Hostess City. You may want to check out the areas where the tunnels are (especially where they are sealed off). While there is no guarantee that you may encounter some ghostly activity, you might want to visit Factor’s Walk anyway, even if you feel hungry or in the mood for a drink.

Factor’s Walk should be the number one stop for anyone visiting Savannah. Not only will you get the best of Savannah’s shopping and food, but you’ll likely experience the spirits that call this little stretch of market home. Have you ever been to Factor’s Walk? If you’d like guidance while exploring Savannah’s haunts, why not book a ghost tour with us? Our tours are offered, rain or shine, daily.