Columbia Square and Her Haunted Houses 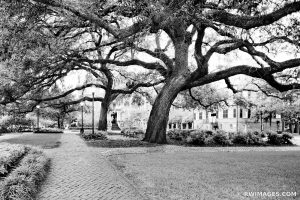 James Oglethorpe’s plan for the city of Savannah included a street grid, urban gardens, and green spaces. For the most part, city planners stuck with this plan for the most part and Savannah owes a lot of its charm to this layout. The city now has twenty-two town squares, Columbia Square being one of the most haunted.

The area around this particular square was known as Eastern Commons during the 18th and 19th centuries. It was a predominantly Irish neighborhood and was known for its bordello homes and questionable bars. These days, Columbia Square is home to three of Savannah’s most haunted houses — The Davenport House, The Kehoe House, and the 17Hundred90 Inn. Spirits of Columbia Square include a tabby cat, an Irish servant named Anna, and even two of the Kehoe children.

Want to meet the spirits of Columbia Square for yourself? Join us for a Savannah ghost tour!

A Short History on Columbia Square

Columbia Square is well known for being the birthplace of Savannah’s historic preservation movement. The Davenport House itself was doomed for demolition until seven local women stepped in during the 1950s and saved the home from becoming a parking lot — or another square!

Columbia Square served as the border to Savannah’s Eastern Commons. This neighborhood was mostly Irish and was home to a handful of bars, brothels and taverns. During the Irish potato famine, Irish immigrants often boarded at the Davenport House, which served as a sort of Ellis Island, a gateway into settling the neighborhood. The area was a melting pot, with sailors, dockworkers, and Irish immigrants mingling with African American enslaved people as well as servants.

As one of the most important historic sites in all of Savannah’s historic district, the Davenport House was one of the first to be restored and even served as the headquarters for the Historic Savannah Foundation. The home is surrounded by mystery and intrigue, which is no surprise, since it sits right in the middle of the historic district in the oldest city in Georgia.

Pretty much every building in Savannah, especially the historic district, has reported hauntings. A few spectral guests still call the Davenport House home, and visitors report a variety of sightings and unexplained occurrences. Phantoms footsteps and disembodied voices are the most commonly reported happening, while on rarer occasions, guests claim to feel unnaturally cold areas inside the home. A grey, hazy mist is also seen appearing near the gift shop and those who witness it say that it takes on an unsettling humanoid shape.

Visitor’s favorite entity is that of a ghost cat, an orange and white tabby that roams around the building. No one knows who the cat belonged to in life or when it arrived in the building, but it’s here to stay! The phantom feline is known to randomly appear as it follows the museum tour guides around with their groups. It keeps a watchful eye over museum guests, making sure none stray from the group! Guests are fooled into thinking the cat is just a pet up until it vanishes before their eyes.

Museum staff have researched the girl’s identity, but they have yet to come to any concrete conclusion. The Davenport Family lost four of their children, and countless families came and went during the home’s tenure as a boarding house.

It all started when William Kehoe immigrated to America from a small Irish county named Wexford. He moved with his family, his parents and siblings, he was one of eight children, bright-eyed and bushy-tailed, ready to start a new life over in America.

His family eventually settled down with other Irish settlers in the area. William took a liking to working with iron as a teen and apprenticed at an iron foundry. He eventually worked his way up to foreman, and even purchased the foundry. Just after WWI he built a new foundry on the river, making him one of the most successful and prominent men in Savannah at the time.

Energies from countless souls passed through the Kehoe house at one point or another, and those energies are still felt, seen, and heard today. The scent of old perfumes and colognes is extremely common, reported after most guest’s stays. Scents of lilac and rose float through the bedrooms and hallways of the home, and musky tobacco smells sometimes drift down stairways. One spirit, in particular, is said to be one of the most intelligent around. He is able to interact with the living regularly, checking in on them as they sleep and appearing in doorways, only the vanish with the blink of an eye. Guests report the feeling of being touched while they sleep, a cold hand on their shoulder jolting them awake.

Some guests report something a tad bit spookier — the sound of gurney wheels, almost as if the sounds of bodies being brought into the funeral home are still replaying, over and over again. Some visitors report seeing a tall man, almost as tall as the doorways, passing through the rooms of the home and floating down the hallway. He’s seen with no legs, just a torso and head hovering about the home, checking on its visitors. People are sure to state that he doesn’t scare them, his energy is a very warm one. However, seeing a legless floating man is sure to make the hairs on your neck stand up.

A rumor persists about the Kehoe family and their ten children. It is said that two of these kids passed away right inside the home. Different versions exist of the story, but the most retold one states that the children got stuck in the chimney and couldn’t get back out. Their mother arrived home, finding two of her ten children missing, searching frantically all over the home. She was unable to locate them, but when a strange smell started to emanate from the chimney, the bodies were found. This exact story hasn’t been proven, but reports of child spirits at the home do exist.

Guests report their belongings being rifled through, almost as if a curious kid is looking into your suitcases. Others hear giggling and the sounds of toys banging around. Talking and tugs on pant legs are also commonly reported occurrences in the Kehoe home. Some visitors have even been so lucky as to see the face of a young child peeking from the windows, later to find out that no children are staying at the bed and breakfast. Could these be the Kehoe children that passed? Whoever they may be, it seems as if these spirits just want a bit of attention, some love from the guests that are visiting their childhood home.

The 17Hundred90 Inn in Savannah, Georgia is a hotspot for ghost aficionados and foodies alike. With an extensive history and an even larger menu, the 17Hundred90 Inn is well known for its spirits. Following the American Revolution and Independence from England, Savannah was just a small sandy city with roads for horses, wooden framed buildings, and a dream.

The 17Hundred90 Inn and Restaurant are housed in what once were three separate residences. The western part of the building was a duplex built by Steel White between 1821 and 1823. The smaller section of the inn was built by the Powers family in 1888. The ground level is thought to be part of an even older previous structure, possibly destroyed in the Great Savannah Fire of 1820.

A boy named Thaddeus is sometimes seen on the ground of the tavern and restaurant. He leaves pennies lying on tables and the bar as gifts for patrons. He is also friendly, and said to be experienced through warm spots and a comforting unexplainable presence.

Another spirit at the 17Hundred90 Inn is believed to be that of a past Voodoo practitioner. This spirit has taken up residence in the kitchen. This one is much more sinister, and isn’t very fond of women in the kitchen area. This ghost is said to throw pots and pans, pushes people, and pranks are pulled on the female kitchen staff.

While women are alone in the kitchen, they hear the sounds of someone moving around in there with them, with the sounds of pots clanging and cupboards slamming. The staff believe this is the spirit of a servant who used to work for the family who lived in the home. She was believed to be a well-known Voodoo practitioner in her life. No one is sure why she’s so angry, or why she had such an issue with women, but its suggested that you watch your back if you’re anywhere near the kitchen during your stay at the inn.

Columbia Square, like many other squares of Savannah, is packed full of haunted history. Want to know more about other haunted Savannah squares? Check out our blog!