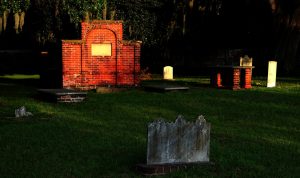 Colonial Park Cemetery is one of Savannah’s oldest and most haunted burying grounds. Built in 1750, the cemetery contains many of Savannah’s earliest settlers. These include the 700 victims of the Yellow Fever epidemic, all of whom were interred in a mass grave. It is said that the actual number of residents who fell to the plague numbered 666, but the total was rounded up to avoid any mention of ‘the number of the beast.’ The cemetery also served as the city’s dueling grounds from 1740 until 1877.

Savannah was spared from complete destruction of Sherman’s March to the sea during the American Civil War when the city was surrendered without incident as the Rebel Army retreated across the Savannah River into South Carolina.

Unfortunately, the cemetery has been the target of vandals for centuries — many of the headstones were changed with bayonets with one man living to age 421, his neighbor living to the age of 544, and another man’s son was born 1,000 yeas before his father.

Many of the locals blame ‘General Sherman’s Bummers’ for the desecration of the graves.

History of the Colonial Park Cemetery

The cemetery was established in 1750 when Savannah was the capital of the British Province of Georgia. By 1789 it had grown three times to reach its current six acres at Abercorn Street and East Oglethorpe Avenue. It’s been Savannah’s public cemetery for over one-hundred and three years, previously known as the Old Cemetery, Old Brick Graveyard, South Broad Street Cemetery, and Christ Church Cemetery.

Originally created to be the burial ground for the Christ Church Parish, it became a cemetery for Savannahians of all denominations in 1789. The cemetery was closed to burials in 1853 before the start of the American Civil War. After Union troops occupied Savannah on December 24th, 1864, the graveyard became a temporary home to several hundred Union soldiers. Soldiers even sheltered inside of vaults during the war.

Within the six acres that make up the Colonial Park Cemetery, there are over 10,000 people buried. However, there’s not even 1,000 grave markers. Many believe that the desecration of the burial grounds helps to fuel the haunted activity that emanates out of the cemetery to this day.

Button Gwinnett – signer of the Declaration of Independence

More than 700 victims of the Yellow Fever epidemic of 1820 are interred at the Colonial Park Cemetery, most of them in a mass grave.

The Spirits of Colonial Park

One of the most famous ghost stories to come out of Colonial Park Cemetery is the story regarding Rene Rondolier. Rene’s ghost is reported walking throughout the cemetery, or even hanging from the infamous ‘Hanging Tree’ which is towards the back of Colonial Park Cemetery. So, just how do people know this is Rene’s ghost? Well, in his physical form Rene was a very, very tall man. He stood at almost 7-feet-tall. It is said that Rene was caught after murdering two young girls inside the cemetery. A mob was then organized to hunt down and lynch Rene. After he was hanged in the nearby public square, residents started to report a large shadowy figure walking the grounds of Colonial Park Cemetery.

A lot of questions surround the Rene Rondolier story, some of which ask if he even existed. Rumors swirl around the story even today, and no one is quite sure how much of the tale is based in fact.

Savannah is home to a very healthy Voodoo culture, many Voodoo practitioners live in Savannah even in the present. Before the Colonial Park Cemetery was closed, the remnants of Voodoo ceremonies could be found in the early morning hours.

The soil from graves in the cemetery is thought to be used in various Voodoo ceremonies, in addition to the soil the graves were sometimes raided in order to retrieve human bones for ritualistic purposes.

Just past the south wall of Colonial Park Cemetery is a small park. The stories say that this spot was used as dueling grounds in Savannah when dueling was still a legal way to solve your disputes. After the city of Savannah passed laws outlawing duels, the participants would head over to South Carolina to duel there. Over the years countless men lost their lives on the grounds.

Another rumored use of these dueling grounds was that it was actually used as a mass grave for the victims of the Yellow Fever epidemic that swept the area.

In the early days of the southern city, tracking the dead was tough. Lost remains were not uncommon. According to locals, even the body of a Major General was lost. On June 19th, 1786, Nathanael Greene succumbed to heatstroke on his plantation, Mulberry Grove. The Major’s body was transported into Savannah by boat the following day. In the late afternoon, his body was then brought to the Colonial Park Cemetery for burial. He was supposed to be interred in the Greene family vault. A few years after Nathanael was laid to rest, the vault was opened to place his son George.

But, he and his son were placed in the wrong vault. 30 years later in 1902, the bodies of Major General Greene and his son were found in the Graham-Mossman family vault. They were moved to their final resting place in Johnson Square which bears the Greene name.

Hauntings at the Colonial Park Cemetery

With such a dramatic past, it’s no surprise that the Colonial Park Cemetery is known for its hauntings. Visitors report seeing spirits lurking amongst the gravestones, peeking around them. Noises come from an otherwise empty cemetery, and an eerie green mist is witnessed gently floating over the tops of all of the headstones.

Colonial Park Cemetery has been neglected over the years and the land was threatened as the growing city pondered other uses for it. In 1896 efforts were made to restore the grounds. The city did its research to document the cemetery’s history and worked to develop a more accurate mapping of the entire property. All of the existing grave markers were photographed and inventoried.

A visit to the Colonial Park Cemetery is a step back in time. The grounds are open daily 8-8, and taking a walk through the beautiful grounds gives you a first-hand look into Savannah’s hauntingly interesting history.

Pay close attention to the dates on headstones, as you travel back into time and get to know the citizens of the city that lived before you. One can even visit the cemetery after dark from outside the walls. Take a peek through the fence and see if you can catch a glimpse of Rene’s hulking spirit or the strange green mist that is said to reside there.

Have you ever visited Colonial Park Cemetery? Were you able to catch a glimpse of anything strange or unexplained? If a visit to the Colonial Park Cemetery gives you the urge to see some other haunted sites in Savannah, why not check out the Andrew Low House, or perhaps the infamous Bonaventure Cemetery.