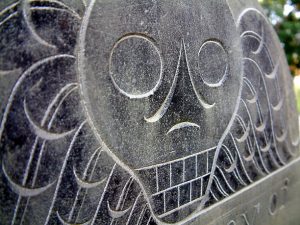 Just around the corner from historic Wright Square lies a home at 12 West Oglethorpe that had sat abandoned for nearly forty years. The childhood home of Juliette Gordon Low, or Daisy Low, the founder of the Girl Scouts, has seen better days. (If you’d like to learn about Daisy Low and the haunted Low House, check out our article!)

Later, it served as the meeting spot for the Savannah chapter of a mysterious Masonic fraternity, then later it was a performing arts school. The building was abandoned in 1985 and rumors of hauntings in the building have swirled around it ever since. So, what is the truth behind the rumors? Why is 12 West Oglethorpe so haunted?

It’s unclear exactly when the building at 12 West Oglethorpe was constructed. Before the area’s development, like much of Savannah the land was a burial ground. This area was specifically created for Jewish folk who had passed. The house itself is dated back to 1898, but a building in this spot existed long before that. It is believed that the Gordon family owned this house in the 1860s after moving from 10 West Oglethorpe to distance themselves from an ever-present family feud. Juliette Gordon Low, was born at 10 West Oglethorpe and lived in 12 West Oglethorpe for at least a decade. It remains unclear as to when the Gordon family actually moved out of the home.

After its renovation, the home was sold to the Benevolent Protection and Order of Elks, a Masonic fraternity and social club. The Elk’s Lodge used the building as their meeting place for over fifty years, becoming the building’s longest tenant. The initials of the Order, B.P.O.E. are engraved upon the house and remain there to this very day.

The building has been the subject of many legends and rumors. Alas, some of the history of the home is confirmed, which we’ll share with you below.

Yellow Fever and the Doctor

It was the late 1820s when the last major outbreak of Yellow Fever struck Savannah, Georgia. A doctor was living in 12 West Oglethorpe at the time and was using the family home to treat patients suffering from the disease. As he brought more and more patients into his home, his family started to fall ill.

His wife and his son died shortly after contracting the disease. The doctor couldn’t bear the loss, he fell into a deep depression and quit practicing medicine. He ended up boarding himself up into one of the upstairs bedrooms and refused to leave, even for food. Eventually, the doctor died of starvation.

Many have questioned the validity of this story. Some of the facts just don’t add up. Firstly, Yellow Fever spreads through transmission of mosquito, not person-to-person. Having patients with Yellow Fever in the home wouldn’t have caused anyone to contract the disease. However, it was summertime in Georgia and the family could have been bitten by mosquitoes. Others argue that no doctor ever lived in the home, and that the ghost stories surrounding the doctor were created because 12 West Oglethorpe was your quintessential haunted house. Regardless, reports of ghostly activity still surround the home regarding the doctor.

The house on 12 West Oglethorpe has sat abandoned for such a long time that it’s become the subject of urban legend. The building is in obvious need of a little TLC and a peek through the grimy windows shows a neglected and empty interior. Part of the upper floor is even missing.

In regards to the famed doctor, tourists report seeing the apparition of a man standing in the windows of the house. Many claim to have captured photos of the doctor’s ghost. Tourists on guided tours also say they’ve gotten sick when merely walking up to the house. Those affected say they felt the symptoms of Yellow Fever when they got too close to the building, and the symptoms subsided as they retreated and walked away. Many visitors to the home say that his spirit remained in the building to grieve the loss of his family.

Ivestigators who have entered the home have seen shadow people, heard disembodied voices, and had their electronics malfunction. Temperature readings taken in the basement often result in readings of 66.6 degrees. In 2009, a few pranksters started a fire behind the building. After firefighters put out the blaze, a few of them claimed to have seen a ghost in the room where the doctor allegedly died. After the fire in 2009, firefighters conducted a walkthrough of the house to check for structural damage. One of the firefighters entered the room where the doctor had locked himself up. The firefighter let out a loud yell, then ran out of the house and locked himself in the fire engine. He never revealed what he saw to his colleagues, but many believe that he encountered the ghost of the doctor.

Numerous investigations of the home and the surrounding area haven’t revealed any new information, but new reports of unexplained phenomena come from the house often. Visitors tell of three-dimensional apparitions walking towards them, as well as disembodied voices calling out their names. Electronics are known to malfunction when they get close to the home, especially during moments when visitors attempt to take photos of the house — it’s almost as if the spirits of the home are preventing their presence from being documented.

Many residents believe the building’s proximity to Wright Square, the site of Savannah’s first recorded murder is the cause of the hauntings at 12 West Oglethorpe. This area of Oglethorpe Avenue was also the site of the city’s first Jewish burial ground. The bodies of the dead were never moved, so the remains of a few thousand people remain under the paved street.

12 West Oglethorpe has more than a few unexplained happenings under its belt. From a ghostly doctor to strange voices echoing from the home, the building has a centuries old history and a creepy aura to match. Savannah itself is considered to be the most haunted city in all of America. The city’s reputation rivals that of New Orleans or even Salem. From deadly disease, wars and murders, the streets of Savannah are paved with blood and built atop burial grounds. Perhaps this can explain the happenings of the home. Maybe the home itself has nothing to do with the hauntings, but the land itself is responsible for the unexplained.

It’s true — most of Savannah is built on top of some sort of graveyard. The largest being Yamacraw Bluff, a burial ground for the Muscogee tribe which now lies beneath much of Downtown Savannah and the historic district. One cannot forget about 432 Abercorn Street, said to be Savannah’s most haunted house, which is built right on top of a cemetery filled with the bodies of enslaved people. The famed Pirate’s House was formerly a beautiful botanical garden, but before that was used as a Native American burial ground of the Yamacraw tribe. Obviously, Savannah is home to much more than amazing music and hundreds of years of history.

If you’re looking to learn more about Savannah and all of its ghostly hotspots, join us for a hauntingly fun ghostly history tour!