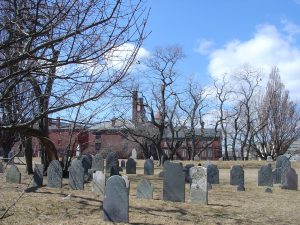 “More Weight!” These are the famous last words of a man sacrificing his life for the betterment of his family. 81-year-old Giles Corey was pressed to death through a medieval method of torture known as peine forte et dure or strong and harsh punishment. For three days, between September 16th and 19th, 1692, Corey was subject to the scant mercy of his fellow villagers in the sleepy maritime colony of Salem, Massachusetts. His remains now lay amongst the austere tombstones of the Howard Street Cemetery. It may not have said much if he had a tombstone, but an unmarked grave is where he now rests. Before taking his pass out of this world, he breathed a curse upon the town of Salem. The adjacent Old Salem Jail attests to the curse. Steady jobs can be hard to come by. Marked with grim, plain-faced Puritan tombs, themselves marked with grim epitaphs in line with purist fashions, the Howard Street Cemetery is a short glance into settler life. Other significant players in the city’s history are early African-American settlers and Revolutionary Soldiers. Apparitions have been recorded here, but trespassing remains illegal, which does not stop many from entering.

A recreation of the interior of Cleopatra’s Barge
Source: Wikimedia Commons

Built in 1801, the Howard Street Cemetery, formerly the Branch Street Cemetery, in many ways, shares much in common with other Protestant Cemeteries found across New England. The 1,100 tombstones that pock the landscape read the reverences to men who died in the Revolution against England’s taxing control. Colonel Samuel Colton, who served with George Washington at Fort Ticonderoga, lies here. Captured a few weeks after the war began by Benedict Arnold in 1775, Fort Ticonderoga helped shift the battle firmly in the direction of the Americans. Early mercantilists who helped build Salem’s bustling naval economy also rest in The Howard Street Cemetery. George Crowninshield, Jr. was put below ground on November 26th, 1817. Before his death, he was known as the first yachtsman in America and a wealthy trader. He wore eccentric clothing and had a deep admiration for Napoleon Bonaparte. There are stories that his yacht, on which he would later die, Cleopatra’s Barge, its elegant interior so ostentatiously lined, was built for the rescue of the Emperor. Early African-American figures, both free and enslaved, are here as well. One of the most prominent is Prince Farmer. He was a wealthy businessman in a time when many were slaves. A cook aboard Crowninshield’s aforementioned luxury yacht and later an oyster shucker. He was a member of the Masonic temple and one of the first abolitionists in Salem. Essex county, where Salem resides, played a large role in developing the Underground Railroad. Much of the movement began in what is now called the Essex National Heritage Area. The farmer was not alone in his battles, as many abolitionists and African American families would go on to live at his property at 18 Crombie Street. Farmer died in 1852, and his gravestone has nearly become a part of the landscape.

The most famous resident of the cemetery, though, is Giles Corey. He was pressed to death in this very area when it was a small field. His spirit is often seen wandering the cemetery at night. Many say disaster follows in his wake.

The Trial of Giles Corey

Giles Corey was accused of being a witch by a handful of the Putnam Girls in April 1692. A month prior, his wife and befallen their judgment as well. Giles himself testified against his wife to avoid such accusations. But his fate had been sealed by rivalries and disagreements dating back to Salem’s start. During the years before the witch trials, two families controlled the direction they believed Salem should be headed. The Putnam’s believed in a traditional agricultural society, while the Porter’s put hope in the new mercantile way of life. Like wildfire, these two families created unease and dissent, eventually splitting the town in two! Salem Village and Salem Town aggressively coexisted for some time after splitting in 1762 due to these economic disagreements and other, often petty, religious feuds. Giles was aligned with the Porter family despite being a well-to-do farmer. The Putnam’s believed that The Porter’s helped him get off easy on a murder charge over stolen apples some years back. Both he and his wife were targeted by the Putnam’s and their daughters. They used the paranoia and hysteria that had engulfed the town to their advantage. 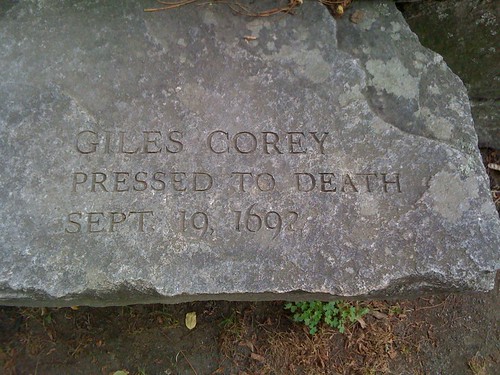 Even though Giles testified against his wife, albeit the third one, to save his hide, he considered himself somewhat of a family man. When his trial began in April 1692, he refused to submit a plea. He knew that if he were to plead not guilty, the judge would find him guilty regardless, and the state would confiscate his land. His land, deeded to his son in laws, was to stay in the family. Under English law of the time, one who refuses to submit a please may be tortured until they do so. He was pressed for three days. His tongue, at one point, was pushed back into his mouth by the local Sheriff. Not before he could utter a curse upon Salem. Soon after his death, the executions stopped. Many credit him with ending the witch madness.

A Curse Upon Salem “I curse you and Salem” were the exact words that fell out of Corey’s mouth before passing on from this world. Who was that you? Many believe it to be the Sheriff that so ruthlessly caused Corey’s tongue to pop out of his mouth, pushing it back in with his cane in an authoritative show of justice for all to see. Sheriff George Corwin died at the age of 30 of a heart attack. The majority of Sheriffs that took office after Corwin’s death, up until modern times, would also suffer from heart attacks and rare blood disease. Robert Cahill served as Sheriff for three years before retiring due to heart problems in 1978. He would go on to help preserve much of Salem’s history involving the witch trials by opening the Salem Witch’s Dungeon Museum. In the 1990’s he wrote several paperbacks that helped educate people on the witch trials, significantly boosting Salem tourism. Cahill and others believe the curse was finally broken when The Essex County Sheriff’s office was moved to Middleton, far from The Howard Street Cemetery and the ghost of Giles Corey. However, his spirit still wanders the cemetery at night. Cahill claims to have seen him there the night before the heart attack forced him into early retirement. Others say he appeared before the Salem fire of 1914 that killed three people, injured 60 others, and destroyed 1,376 buildings in an already small town. Rather than illegally sneaking into a cemetery at night, read on and find out more about haunted Salem!