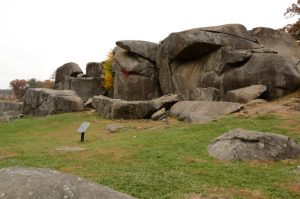 With a name like Devil’s Den, it’s no surprise that this Gettysburg location is considered one of the darkest and most haunted.

The event that created the lore surrounding Devil’s Den is the fighting that took place on the rocky outcropping on July 2nd, 1863. However, stories surrounding the infamous location started long before the battle was fought.

Read on to learn about the haunting history of Devil’s Den and the hauntings that are reported today.

During the second day of fighting in the Battle of Gettysburg, one of the worst in the Civil War, Colonel Robert E. Lee had decided to go against the advice of his second-in-command, James Longstreet, and launched an attack on the Union. His stubbornness resulted in a staggering 35,000 deaths over the next two days, reaching a crescendo at Devil’s Den, a formation of rocks in the middle of Gettysburg Battlefield.

Leading up to this bloodbath, Lee was grieving the loss of his most-trusted General, Stonewall Jackson. It may very well be this loss that caused Lee to act erratically going forward. Wanting to bring swift justice to Stonewall’s death, the Colonel devised a new plan of attack that would focus on Cemetery Hill.

But after giving direct orders for his newly-appointed general to attack Cemetery Hill, Lee again found himself faced with internal opposition. His general outright refused to lead the onslaught, citing that Union forces were too powerful.

The position of Devil’s Den was commanded by Brigadier General John Henry Hobart Ward. The fight for Devil’s Den began, and soon the terrifying terrain and sharp boulders created a horrifying maze for soldiers from both sides. The lines were broken, and soon it was man against man. The boulders provided countless hiding places and ambush spots. Men ran from boulder to boulder, ducking and shooting as they went, never knowing if it was friend or foe just around the corner.

Confederate men overwhelmed the Union side and took control of the ridge, but they didn’t hold it for long.

The Federal forces counter-charged and the Main and Pennsylvania troops pushed the Confederate soldiers back. The rocks at Devil’s Den soon became a slaughterhouse, bodies were strewn across boulders and were wedged into the spaces between them.

Union troops were attacked — again. This time by troops from Georgia, who had been given the task of advancing across Triangular Field. As they reached the Slaughter Pen, they were charged by the 40th New York, who soon were driven back and forced to retreat. One last surge of men from Texas and Georgia finished the skirmish and the Confederates claimed the Den as their own. George Branard, a color bearer, planted a Texas flag on the highest rock above the Den, only to be hit by a Union shot.

Devil’s Den was the location of more than 1,800 Confederate deaths and just over 800 more on the Union side.

According to early accounts from the area, the rocky outcropping was once a Native American hunting ground. It’s said that a battle was fought here called ‘The Battle of the Crows,’ during which many people perished. A Gettysburg writer named Emmanuel Bushman wrote in an article about the ‘many unnatural and supernatural sights and sounds’ that were reported at Devil’s Den. He wrote that early settlers had told stories of ghosts that had been seen there and apparitions of Native American chiefs could be seen wandering the area at dusk.

The name Devil’s Den was also in use before the battle of Gettysburg took place. People would write in their letters home about the Den, calling it a ‘desolate and ghostly place,’ mentioning the menacing rocks.

No matter when the den got its name, it was already considered a dark location long before the battle, and in the years that followed, the den gained an even more fearsome reputation.

After the hours of fighting at Devil’s Den, some Confederate men were ordered to stand guard in the boulders that night. Many of them spoke on the strange and unnerving surroundings — the shared space of the living and dead.

The dead at Devil’s Den remained unburied for days, perhaps even weeks. Many of the bodies were said to not have even been buried at all, just tossed in the deep crevices of the boulders.

The carnage at Devil’s Den has led to the countless reports of hauntings we hear today. Even skeptics of the hauntings at Gettysburg can agree that the Den possesses otherworldly energy.

One report dates back to the early 1970s — a woman was said to have gone into the NPS information center to inquire about the possibility of ghosts on the battlefield. She was asked why she wanted to know and swiftly answered. She said she had been out on the battlefield that morning, taking photographs. She stopped her car at Devil’s Den and stated that just as she raised the camera to her eye to snap a photo of the rocks at sunrise, she sensed the feeling that someone was behind her. When she turned around, she was faced by a man.

She described him as having long, dirty hair, ragged clothing, and no shoes. He asked her ‘what you are looking for is over there,’ pointing behind her. The woman turned to see what he pointed at, and within seconds turned back around to face the man again — but he was gone.

What could he have been pointing to?

A month or so later, the same ranger was on duty at the information center and had another visitor come in and ask him the same question after taking a photo at the Den that showed a strange, long-haired man standing by the boulders.

So, who was this man?

In addition to the long-haired apparition, there are also reports of a ghostly rider who has been seen alongside the sounds of gunfire and men shouting.

Devil’s Den, to this day, remains one of the most active haunted locations on the Gettysburg Battlefield. The sheer number of deaths alone could be to blame for all of the otherworldly activity, but perhaps it comes down to the way these dead were treated, pushed between rocks as if nothing more than matter, not men.