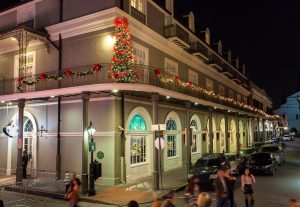 One look at the Bourbon Orleans Hotel, and one can revel in the hefty dose of luxury and history it provides its guests. But, if you dig a bit deeper, two hundred years of history, a blazing fire, a structural collapse, a suicide, and a deadly yellow fever epidemic proves that you cannot judge a book by its cover — or, in this case, a hotel by its lobby.

The Bourbon Orleans Hotel opened as the Orleans Ballroom and Theatre in 1815. It was a place for wealthy socialites and their entourages to gather and peacock. It hosted plenty of ballroom dances and ‘Quadroon Balls,’ where wealthy Creole men would engage in secretive affairs with women who were of African American descent.

The Orleans Ballroom and Theatre passed hands a couple of times before it was host to one of the worst outbreaks of Yellow Fever that Lousiana had seen. This epidemic took a few lives with it and set the stage for the tragedy and haunts that are evident in the theatre today.

History of the Orleans Theatre and Ballroom

The Orleans Theatre was an exclusive club meant for the highest of the society of Lousiana Creole descent. The theatre mainly hosted French operas. The fun ended when a fire destroyed the building in 1816. Entrepreneur John Davis stepped in — he was set on bringing life back to the theatre and dreamed of getting it back to its ‘glory days.’

Davis bought the land under the charred building and hired architect Henry Latrobe to construct the theatre. This time, Davis wanted to add a grand ballroom. In 1819, the rebuilt Orleans Theatre and Ballroom was completed.

The venue began again hosting various activities, including the infamous Quadroon Ball. The fun for New Orleans socialites was stalled again when Big Brother moved in — in 1828, a fire burned down the old Capitol building nearby, forcing state legislature to move their operations into the ballroom. During this time, Andrew Jackson announced he would run for president of the United States.

The Nuns Move In

In 1842, Henriette DeLille founded the Sisters of the Holy Family, America’s first and oldest order of African American nuns. Starting with just her and twelve others, the congregation grew to encompass over 150 other nuns by the end of the 1800s. In 1881, the growing community saw an opportunity when the Orleans Ballroom was put up for sale.

The building soon became St. Mary’s Academy and served as the nuns’ home and a school for young African American girls.

During this time, Yellow Fever took over the convent, claiming the lives of several children and nuns.

The adjacent Orleans Theatre was treated as a separate building and was called Signor Faranta’s Iron Theatre. The theatre saw much success until it burned down. The Sisters of the Holy Family purchased the lot and built St. John Berchman’s Asylum for Negro Girls, which served as an orphanage. They also built a playground and courtyard for the children which today exists as the courtyard and pool for the Bourbon Orleans.

By the 1960s, the Sisters of the Holy Family expanded to over 400 nuns, outgrowing St. Mary’s. They sold the property and moved on to a larger convent located in the Big Easy, where they remain today.

The Bourbon Orleans Is Born

The Bourbon Kings Hotel Corporation bought the property from the Sisters of the Holy Family in 1964. They spent over seven million dollars to restore the Orleans Ballroom, and they even added a lobby, dining room, and bar. 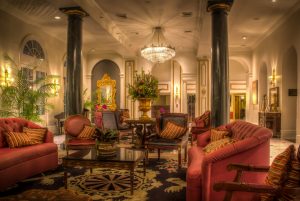 The beauty of the hotel is evident in its opulent lobby. Source: Flickr

These days, the Bourbon Orleans Hotel is one of New Orleans’ most historic hotels, located right on its namesake Bourbon Street. The hotel offers guests stunning views of the French Quarter and the St. Louis Cathedral, along with those classic New Orleans balconies.

The Bourbon Orleans is said to be haunted by more than twenty ghosts; included are the young girls who perished in the Yellow Fever epidemic, a couple of nuns who lost their lives on the property, a nun who committed suicide in room 644, and a dancing woman in the ballroom.

On a New Orleans website, one horrific accident occurred that claimed a couple of lives and injured forty others is recounted:

The proceedings were just hitting their stride, when a loud report — described as similar to a musket shot — rang out.

Within five minutes afterward the whole of that side of the theatre was a perfect wreck and ruin, some six or seven individuals were killed outright and probably thirty-five or forty others more or less severely injured,”

After all, was said and done, the death count had been reduced to two, a 27-year-old notary and a 14-year-old boy.

Haunts of the Bourbon Orleans Hotel

As one of New Orleans’ most haunted lodgings, the Bourbon Orleans Hotel boasts over twenty entities that wander within its walls.

Many of the entities witnessed at the hotel are those of the young girls who died during the Yellow Fever epidemic that swept through New Orleans. The nuns who cared and prayed over these young lives also contracted the disease, and some perished alongside them.

Apparitions of young girls are seen lying in beds, with black mists seemingly praying over them. Guests have also reported hearing laughter and the light pitter-patter of feet running up and down otherwise empty halls.

Room 644 is said to be the most haunted spot in the hotel. It’s reported that a nun committed suicide in the room, a rumor which hasn’t been confirmed or denied by the Sisters of the Holy Family. Guests and staff report hearing bloodcurdling screams from the room at all hours — guests who are brave enough to stay in the room report feelings of unease and a strange apparition who appears to them before they fall asleep.

The Ballroom of the Bourbon Orleans is another hotspot — there seems to be a ghostly woman who is seen dancing the night away underneath the chandeliers. Staff also claim that she hides behind the large draperies when she’s not busy dancing, often shuffling them around to get a rise out of unsuspecting guests.

Who the woman is remains unknown, but many believe her to be linked to the Bourbon Orleans’ days when it hosted those Quadroon Balls — perhaps she was a secretive lover of one of the hotel’s past guests.

While the Bourbon Orleans was initially meant for members of high society, guests of all backgrounds are now welcome within its walls — even those without a physical body.