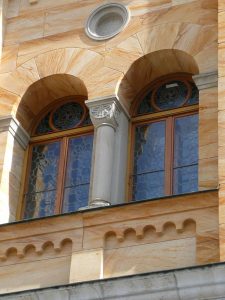 What do you get when you mix Greek and Creole architecture, French Quarter flair, an Animals reference, a bordello past, and hauntings far beyond anyone’s imagination? The Villa Convento, that’s what!

Reportedly the property in which the song House of the Rising Sun is based on, the Villa Convento is one for the books — even reviewers on Trip Advisor boast of its ‘vibe’ and history.

Located on the very historic Ursulines Avenue, the hotel is only steps away from Jackson Square and the St. Louis Cathedral. Just outside the hotel itself is the Ursuline Convent, the oldest structure on the western side of the Mississippi River.

So, follow us to the facade of this fancifully phantom-filled lodging and step through the door to get to know this historic and haunted New Orleans gem!

History of the Hotel Villa Convento

The plot of land on which the hotel sits was once owned by Ursuline nuns. The nuns had arrived the in the area early on in the French Colonization period. Though the nuns were greatly loved and appreciated throughout the city, they were unable to hold onto all of their original land and in 1805, they partitioned some of it off — thus, the Hotel Villa Convento’s plot was sold. 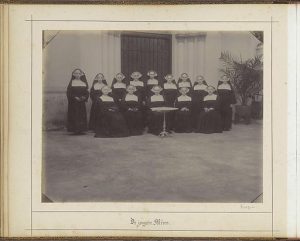 Ursuline nuns like these ones used to own the property where the haunted Villa Convento now stands. Source: L&L

The plot of land was passed from hand to hand until it eventually found its way into the palm of a Frenchman named Jean Baptiste Poeyfarre. The townhouse Poeyfarre built there in 1833 is the same structure that stands at the location today. For some time the home remained in Poeyfarre hands, but when Jean died ten years later, his widow sold off the property once again.

This time, Octave Voorheis was the buyer of the gorgeous townhome. He was unable to hold onto it for long, and the property flew from his grasp in the period following the American Civil War in the midst of heavy depression. With the South’s wealth depleted, life in New Orleans certainly became more turbulent.

Wealth and endless enjoyment were no longer the norm in the Crescent City, and when Union troops took over the city in 1862 and remained there for the rest of the war, there was no mistaking the nosedive that New Orleans took after the Civil War ended.

New Orleans was failing to stand up to its past self, and the city sank into the bosom of sin and vice. It was during this time that the hotel Villa Convento became a brothel.

There’s not a whole lot of evidence surrounding this claim, but records do show that something unsavory was happening at the address during this time. Bordellos in the 19th century were known for their abuse and disease, filthy places with forced labor.

After this dark period, the property was sold again, twice.

Pasquale Taromia bought the property in March of 1902 and his family lived there up until 1946 when the property was bought and sold once more.

After 1946, the property was called the Old Town Villa and became a rotating home where people would come to stay when they had no other place to go while they visited the city, a sort of 19th-century Airbnb if you will. Jimmy Buffet even stayed at the Old Town Villa in room 305, which today is, of course, known as the Jimmy Buffett room.

In 1981, the property was purchased by the Campo family. The Campo family’s ancestors actually arrived around the same time as the Ursuline nuns, but from the Canary Islands. Large populations from the islands came to New Orleans during the 18th and 19th centuries.

The Campo family purchased 616 Ursuline Avenue and opened it to the public as a hotel.

Today, the hotel is known all over for its cozy and sort-of quirky atmosphere. Each of the twenty-five guestrooms is unique, it’s easy to see how this was once a vibrant family residence.  Looking out of the hotel windows, visitors can ponder upon the goings on at the Ursulines Convent, or what history occurred at the Beauregard-Keyes House. The New Orleans skyline is even in view of the hotel. Perhaps all of the charm and beauty of this stunning villa is why ghosts from its past are still gallivanting through its halls.

Ghosts of the Villa Convento

The Villa Convento is said to be haunted by the ghost of one of its former madames. Brothels tend to be hotspots for negative energy and that energy tends to stick around.

Guests staying at the hotel have reported strange knocking noises on their doors — not too spooky until you learn that madames would make their rounds and knock on doors to alert the couple inside that their ‘time was finished.’

The madame is said to make herself known to the men who stay at the hotel much more frequently. Men will awake in the night to see a woman in black standing over them.

One man, staying in room 301 was awoken by the sound of a woman’s whisper in his ear. He frantically rolled over, his wife beside him, asleep.

Could it have been the madame attempting to get his attention? Or perhaps it was one of the women who used to work at the brothel.

Guests to room 302 report apparitions manifesting and vanishing throughout all hours of the day. Some guests even request the room, hoping to see the ghosts for themselves.

In room 305 personal belongings are taken or moved, there are bumps in the night, and strange sounds… but one account is that of a staff member, used to the ghost stories of the hotel, but this time she was scared out of her wits.

She went up to the room to check on the hairdryer, but as soon as she stepped into the room, a cold wind traveled up her spine and chilled her to the bone.

She now avoids going into room 305 so as to not disturb whatever entity lies within.

One couple had a taste of the fact that at the Villa Convento, its a ghost’s world.

A couple was staying at the Villa Convento and were getting ready for bed after spending all day exploring the French Quarter. They shut off their TV and got cozy — but then they heard a rather familiar sound. Sounds of giggling and pleasure echoed from next door.

The couple laughed, knowing it would soon pass. They knew that these newlyweds would eventually tire out.

But the sound continued for the rest of the night. The next morning they went to the front desk and asked if they had some newlyweds in the room next to them, sharing a knowing expression with the front desk staff.

She also added that the room was under construction, and would not be ready for guests until a few weeks from then.

Obviously, the goings on of the past at the Villa Convento have echoed into the present in more ways than one — and with the history and magic of the French Quarter, this hotel just adds that little bit of spice and spookiness.

The 11 Most Haunted Hotels in New Orleans