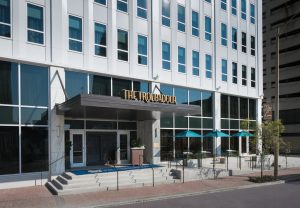 The Troubadour Hotel is just as fabulous as its name sounds! A rooftop bar, elegant dining room, and gorgeous guest suites make this hotel one of the most luxurious for those looking to visit New Orleans with comfort and style in mind.

All that glitters is not gold at the Troubadour, and the hotel’s past surely explains the haunts reported at the hotel today.

The Central Business District in New Orleans has been around for centuries and has been the home of multi-million dollar business deals and innovation since its beginnings. Originally it was called Faubourg St. Mary and was home to the Poydras Market, an open-air market with hundreds of shops and open stalls all under one pavilion.

People traveled by the hundreds to Poydras Market for their grocery needs. The vendors sold fresh fish, produce, meats, spices, and coffee. As most of the city began to grow, so did the Central Business District. Gone was just the open-air market, and along came brick-and-mortar stores — most businesses were operating out of the Central Business District by the 1900s.

By the 1970s, one of the city’s only highrise buildings was in the Central Business District — the Rault Center was a seventeen-story building with apartments and offices. It stood on Gravier Street and is now the home of the fancy and fabulous Troubadour Hotel.

The Rault Center holds a gruesome chapter of Louisiana history — a tragedy that left this mammoth building empty, that is, until the Troubadour moved in.

Tragedy at the Troubadour

The Lamplighter Club, a members-only gathering, operated on the 16th floor of the Rault Center and boasted a vast crowd of New Orleans royalty. The owner of the Saints and a few of his players were members of this exclusive club — the club also welcomed oil executives and elites from the area.

Local celebrities would come to socialize at the club, offering members and their guests a lounge and restaurant, meeting rooms, men’s and women’s health clubs, ski clubs, swimming pools, Saints football tickets, and other activities. A membership at the Lamplighter was coveted.

On the afternoon of November 29th, 1972, the club was filled with society’s elite enjoying cocktails and talking business. The great energy of the night changed when a fire erupted and started to engulf the building’s top three floors.

A few hours earlier, a maintenance man discovered a small fire on the 16th floor and quickly put it out. However, there was another one hiding and gaining strength in the building. With no automatic sprinkler system, the fire escalated quickly and cut off access to the stairwells. The top three floors were completely engulfed, an inferno to which there was no escape. 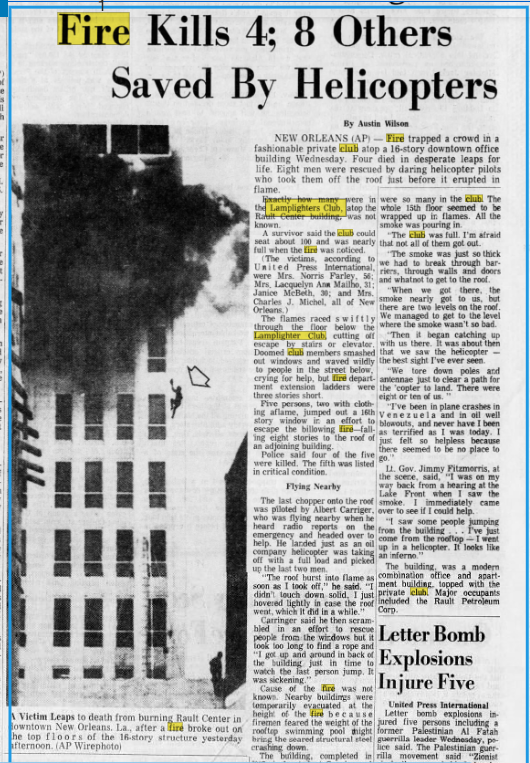 Just below the Lamplighter club was the Lamplighter Beauty Salon. As the smoke began to grow and the heat rose, the fire closed in on the five women trapped inside the building. They appeared in a broken-out window — firefighters stretched out their ladders with hopes of reaching the women, but their ladders who too short. The women were forced to jump fifteen stories downwards or let the flames take their lives.

‘Get us out of here, its starting to burn!’ they yelled. And then she fell and the other four jumped out, one after another.’

The women fell nine stories before they hit the roof of the Travelers Building next door.

“It was one of the low points of my career. It’s devastating to see bodies out of a window, and there you are, helpless, unable to do anything about it…I can still kind of feel the thud when they hit the roof.”

Four of the women perished in the blaze — one was left with two broken legs, a broken back, and a shattered pelvis. She lived to be 81 years old and passed away in 2014.

Lockwood took his craft closer and saw the severity of the fire — he was horrified as he could only save three men at a time. He flew close to the roof and told them of his limitations — they decided who would be rescued first, and the rest waited.

Lockwood dropped the first three men on the lawn of City Hall and headed back over for the other three men. Another helicopter came and rescued the final two men.

Lockwood picked up a police officer and firefighter to see if there was anyone else in the building they could see — just as they completed their rounds, the roof of the building collapsed.

Six people died in the fire that day.

Hauntings of the Troubadour Hotel

With renovations and construction at the Troubadour comes the stirring up of old energies from past tragedies. Guests of the Troubadour report seeing apparitions of half-visible people, including some without legs. Disappearing items and disembodied voices are commonplace at this New Orleans crown jewel.

It’s unknown who these entities are, but their presence is one of the first things guests feel when they enter the hotel.