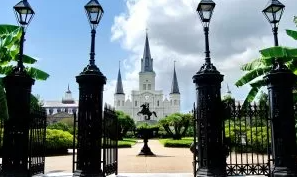 The St. Louis Cathedral, a standard sight in The French Quarter’s majestic skyline, acts as a graceful headstone for Jackson Square in which it resides. The oldest active Catholic Church in the United States and named a Minor Basilica by Pope Paul VI in 1964. It has served as a meeting place for New Orleanians for centuries. Originally constructed in 1724 by French military engineer Adrien De Pauger, it has remained a beacon of hope for the people of New Orleans to this day. This is where Marie Laveau, the famous Voodoo Queen of New Orleans, was married. Pirates used to sell their loot, strewn across the Cathedral’s delicate iron fence, to local passersby. They say Père Antoine, the priest who married Marie Laveau, still haunts the church today. The Minor Basilica of King St. Louis of France, as its officially known still gracefully towers over the old city. In fashion with the rest of the area, the Cathedral, and its surroundings alleyways and gardens, is home to many a ghost story. To hear them, and see the splendor of Jackson Square and the St. Louis Cathedral, book a ghost tour with US Ghost Adventures today!

History of the Cathedral

New Orleans was founded in 1718 by two French Canadian brothers, Pierre Le Moyne D’Iberville and Jean-Baptiste Le Moyne De Bienville. In 1721, plans were laid for what we now call the French Quarter. Military engineer Adrien De Pauger, laid out the construction of a “Place D’armes” with a place of worship at its head. The St. Louis Cathedral was then constructed in 1724. It became the first building the use the “briquette-entre-poteaux” (brick-between-posts) style of construction that became common around the Vieux Carré (Old Square). Built by the French and later transferred to the Spanish , after the French defeat in the Seven Years War in 1763,  the Cathedral became a vital lifeline for the Catholic Creole’s of New Orleans.

While the design and architecture of the French Quarter and its mighty Cathedral appear to be French, this assumption is only partially true. Two great fires ravaged the city, one in 1788 and the second in 1794. 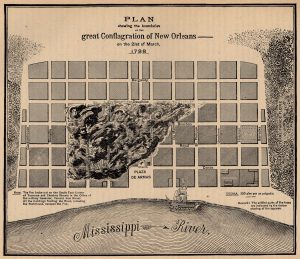 A map published in 1886 depicting the extent of the fire Source: Wikimedia Commons

“The Great Good Friday Fire of 1788,” as it is locally known took place March 21st, 1788. Started in the home of Army Treasurer Don Vincente Jose Nuñez at 619 Chartres Street, just a few blocks from the Cathedral, the fire quickly ate up 827 buildings. The homes of the Quarter were built with Cypress wood at the time and as such quickly caught flame, the Church along with them. It was rebuilt in 1789 by wealthy benefactor Don Andres Almonester y Roxas and as such has deep roots in Spanish architecture rather than French. In fact, there are only three original French buildings in the French Quarter today. Soon after the second fire on December 6th, 1794 it was named a Cathedral and a bishop was appointed. By 1819 the clock tower was added by famed architect Benjamin Latrobe, the man who rebuilt the Capitol building in Washington D.C during the War of 1812. Did you know many famous New Orleanians were baptized at the St. Louis Cathedral? Including the famous Voodoo Queen Marie Laveau.

Marie Laveau, perhaps the most famous Voodoo Practitioner of all time, was born in New Orleans on September 10th, 1801 in the St. Louis Cathedral. The records of the archdiocese note her as being baptized, simply as “Marie,” on September 16th, 1801 by Fray Antonio De Sedella, after whom the adjacent alleyway to the right of the St. Louis Cathedral is named after today. Père Antoine, as he was colloquially known, became one of the most celebrated priests in New Orleans’s history. Later on, he would consecrate the marriage of Laveau to her first husband, Jacques Paris. They were married on August 4th, 1819, once again in the St. Louis Cathedral and by Père Antoine. Paris would not last long in the life of Laveau, records showed him to be deceased by1824. Some believe he simply returned to his home in Haiti, as the great Haitian revolution of 1791 had calmed by then. But many suspect foul play by Laveau. This was believed to be the time that she entered into her life as a Voodoo Priestess. 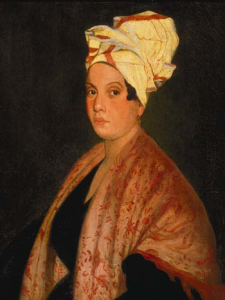 Voodoo is a commonly misunderstood religion in the United States. It is declared an evil activity, associated with black magic and witchcraft. Although magic is involved, it is commonly used with the intention of bringing blessings to oneself or a person in need. Marie Laveau was the first practitioner to bring Voodoo to the mass public and sell goods, spells, and items out of her home. She brought the African-based religion to a broader public and helped expand it past the confines of New Orleans and Louisiana. It is a vast religion with many subtle aspects to it. To learn more take a Voodoo tour with US Ghost Adventures.

The Ghost of Père Antoine 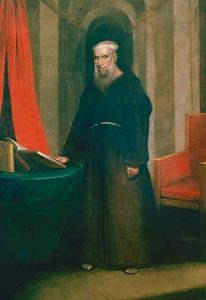 The St. Louis Cathedral is no stranger to supernatural activity. Père Antoine most famously still roams the Cathedral today. Père Antoine has odd origins in New Orleans. He came to the city not only as a priest but as a secret member of the Spanish Inquisition. In December of 1788, not long after the great fire, Governor Don Estevan de Miro received a letter from Père Antoine. He declared that he received the signal from Miro to begin the Inquisition in Louisiana. He now required soldiers to punish the heretics in the colony. In order to continue population growth in the new colony, Miro was forced to exile the priest, sending troops to seize him the very same day he received the letter. Père Antoine would return to New Orleans only a few years later, his hands clean and a new man. He would go on to govern the St. Louis Cathedral for the next forty years and became the city’s most beloved priest in New Orleans history. They say his spirit still haunts the garden behind the cathedral and he can often be seen through the stained glass windows during mass.

The mysteries of the St. Louis Cathedral are endless. Many beloved members of early New Orleans society are buried beneath its grand structure. The early settlers used what is now known as “St. Anthony’s Garden” behind the building as an early graveyard. Later on, this site was used as a dueling ground for the Creole folk of New Orleans. Many say you can hear their swords clashing late at night. New Orleans is chock full of haunted cemeteries and churches. Did you know one of the early below-ground cemeteries still rests beneath the French Quarter today?