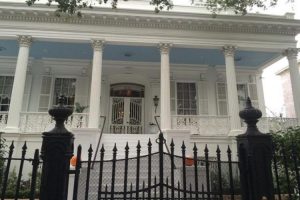 A mansion that stands out from the yellows and mauve exteriors of its neighbors, the Magnolia Mansion is a stark white — with hints of blue peeking out from underneath the veranda. (Haint blue, to be exact, the one believed to prevent any evil spirits from entering the home, architectural history states that the blue mimics the sky and is meant to deter birds from nesting)

Ornate Corinthian columns sit proudly around the wrap-around porch. To any tourist walking past, Magnolia Mansion is a total eye-catcher and is the most photographed location in the entirety of the New Orleans’ Garden District.

The Magnolia Mansion has even been featured in the Top 10 Haunted Homes for Sale alongside USAToday’s 20 Greatest Places to Sleep With A Ghost.

History of the Magnolia Mansion

The Magnolia Mansion is known as The Gateway to the Garden District and is more than just a subject of a gorgeous portrait. It’s a testament to an era of tragedy — and according to the employees and guests of the hotel, the mansion is home to not only an interesting history of New Orleans’ most important families but to the ghosts who still haunt the location.

In 1857, the Greek Revival mansion was constructed by Alexander Harris as a gift to his new bride Lizzie. Harris was a successful cotton merchant and built the home to show off his incredible wealth. He purchased the property from Rufus McIlhenny in 1857 for $12,000. After that, he commissioned architect James Calrow and builder William Day to create one of the most opulent homes in the Garden District, and it would be a full two years before the home was completed.

Calrow was the architect that designed the former home of the author Anne Rice at 1239 First Street.

In the summer of 1869, tragedy struck the Harris household as Alexander Harris fell victim to Yellow Fever and died. Soon after, Alexander’s brother Aaron contracted the disease and died in his home at 35 Bourbon Street. Aaron died just 24 hours after Alexander, and their funerals were held on the same day.

The aftermath of the Harris brothers’ deaths resulted in a chain of events that was truly bizarre. Lizzie, Alexander’s widow, wanted to ensure that her sister-in-law received nothing from the Harris family fortune — she sued her for a sum of $8,400 that was allegedly owed to Alexander by Aaron sometime before his death.

Henriette had nothing, and she was forced to convert her home on Bourbon Street to a boarding house to support her five children. Soon after, she lost the home.

So, what happened with Lizzie? She courted another many soon after he husband was buried and married in July of 1871. Harris Mansion sold the home soon after.

Lizzie sold the home to John Henry Maginnis and his family in 1879. For some time, things went well for them. The family-owned one of the largest cotton mills in the entire city of New Orleans, and 1881, John and his older brother purchased the land for the Maginnis Cotton Mill, which still stands today in the Warehouse District.

The cotton mill brought the Maginnis clan endless fortune, but it brought its employees the same amount of turmoil. It wasn’t uncommon for mill workers to work 10-12 hour days in hazardous conditions.

Constantly breathing in the cotton dust contributed to what is called ‘brown lung’; death wasn’t uncommon in these mills. Workers routinely lost fingers and arms, or for small children to become stuck in the machines.

Tragedy struck the homeowners of 2127 Prytania Street just ten years after the Maginnis family moved in. On July 4th of, 1889, John was struck by lightning.

New spread of his death, and some people who heard the news were rather happy about it. Rumors spread that his death was caused by divine intervention for how he carelessly treated his employees.

After the Maginnis matriarch died, the property was left to their daughter Josephine who kept it until 1939.

Josephine Maginnis sold the home to the American Red Cross in 1939. For the entirety of WWII and the Korean War, the old mansion was home to employees and volunteers of The Red Cross. A school, a center for first aid, and hospital services were all in operation at the mansion.

Unfortunately, the chapter closed, and the property was sold to Dr. Clyde E. Crassons, who once again converted it into a gorgeous private residence.

It wasn’t until the early 2000s that the home became a bed and breakfast and, later on, a boutique hotel. The property underwent maintenance and renovations throughout the years, but it always was kept with its historic charm intact. 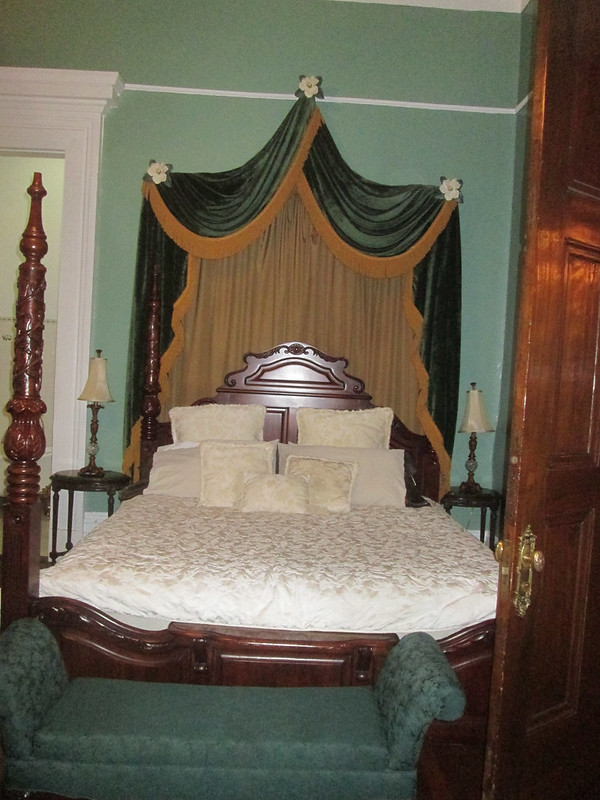 This almost 200-year-old residence is now a place of elegance and offers guests the best when it comes to boutique hotels. The rooms are themed, and each room holds decades’ worth of antique furniture and decor. As gorgeous and comfortable as the mansion is, there’s no denying the fact that some of its guests aren’t checking out anytime soon.

Haunts at the Magnolia Mansion

Two of the hotel innkeepers have both admitted to experiencing strange activity regularly at the hotel. Downstairs on the first floor, the TV goes on and off. Doors lock and unlock by unseen hands and open and close independently.

Quite possibly the most haunted room in the mansion, the decadent Vampire Lovers Lair is home to more orbs and apparitions than we can count. Apparitions are seen in the room’s mirrors, watching guests.

Other guests in the suite report that they are awoken each night around 3 am to a cool breeze running across their skin.

The Ghostly Children of the Mansion

Magnolia Mansion is an adults-only location, a haven for romantic getaways, weddings, and anniversaries. However, guests always seem to report the sounds of laughing children. It’s usually around 4-5 in the morning that the phantom kids start playing. They even leave behind evidence of their visit — tiny handprints on mirrors, apparitions, and personal objects moved around.

So, if you’re looking for a sensual yet historic getaway for you and yours, look no further than the Magnolia Mansion — be aware you may not get much alone time.

For Just $99 A Night, You Can Stay In A Historic (Maybe Haunted) Home At Magnolia Mansion In New Orleans