The Hilton Riverside and its Haunts 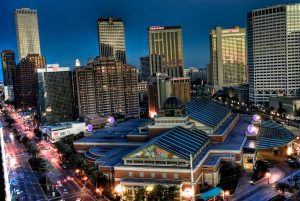 New Orleans is one of America’s most vibrant cities — a snapshot into the state’s past. The city, as locals say, is alive. It’s got its own thoughts, feelings, and heartbeat. New Orleans’ French Quarter seems to be the hotspot — historic buildings and hotels, including the Hilton Riverside, on every corner, strange street performances, glimpses into antebellum New Orleans at each turn… it’s no wonder thousands of people go out of their way a year to experience the Big Easy.

If you were to ask the majority of New Orleanians, the city is one of the most haunted in America. Famous for its practitioners of the mystical arts, voodoo, vampires, Wiccans, and any other strange entity that may go bump in the night, New Orleans tantalizes travelers and locals alike with its intense and sometimes dark history.

Travelers, beware — if you’re looking to visit New Orleans, watch where you book a room — most New Orleans hotels are haunted, including the Hilton Riverside.

A Bit of History

The hotel is just one block outside the French Quarter, far enough to escape the chaos of the popular tourist destination but close enough to enjoy the sights and sounds of historic NOLA.

As its name suggests, it sides right beside the Mississippi River — old-fashioned paddle wheelers can take you and yours up and down the murky waters, where the history of the city becomes evident as you pass each building and wonder at its age and ponder what could have occurred there in its centuries-long history.

New Orleans was built on the labor of enslaved people, and it had a long and complicated history with racial relations.

Back in the 18th and 19th centuries, a concept was known as ‘placage.’ Since interracial marriage was illegal, the well-to-do folks around the area found ways around it. This is where the concept of Quadroon Balls came into play — basically, they would hold a get-together of rich white men and adolescents alongside free women and girls of color.

If one of the boys found one of the girls attractive, he would negotiate with her mother and sign a contract. That contract would allow him to take her to live with him as a sort of concubine until he got married to a white woman later on in life.

This was a horrible tradition but held benefits for the women who were contracted out. After the contract was over, she got to keep anything that the men bought for her, including a home. Any children they had would also be very well cared for and educated. The families ensured that the girl was completely taken care of and had a roof over her head and food in her stomach.

All of this may have been true, but Julie’s story is heartbreaking.

Julie was considered to be an ‘octoroon,’ which meant she was one-eighth African America. She entered a placage with a man named Jean and then lived together at 734 Royal Street in New Orleans.

Throughout the twenty years of their relationship, Julie had grown quite fond of Jean and ended up wanting to marry him. Jean insisted that it was illegal and would never happen. Julie began to worry that Jean would eventually be pressured into marrying a white woman with a wealthy father. A fight ensued, but they were interrupted by some of Jean’s friends at the door, looking to have a get-together.

Placage was supposed to be a discreet arrangement, everyone knew about it, but no one walked about it. While Jean’s friends visited with him downstairs, Julie sat upstairs, hidden away from view.

She decided that her time as a secret was over — she marched down the staircase and asked to be introduced to his friends. Jean then passed off Julie as his maid. Needless to say, she was devastated.

Julie wanted to prove to Jean that she would be a good wife to him and asked him later on what she could do to show him. He told her to undress and stand on the roof, waiting for him to go and get her.

The problem is it was Christmas Eve, and even Louisiana gets cold in the winter. Julie waited all night up on the roof, naked, for Jean. He never came, and Julie froze to death.

Since then, visitors and locals to the city have seen an apparition of a naked woman standing on the roof of 734 Royal Street — just a mile from the Hilton Riverside.

Haunts at the Hilton Riverside

Visitors to the Hilton Riverside experience Julie’s spirit and strange happenings within the luxury hotel itself.

Luggage going missing, phantom footsteps and voices, items moving on their own, and doorknobs jiggling at night are all commonly reported. People coming in from a night out on the town plop down drunk in their beds on top of the blankets only to find they’ve been covered up by morning with blankets from a second bed in the room.

Apparently, a very empathetic and caring spirit is wandering the Hilton Riverside.

Others have seen black mists floating about the halls and heard strange voices calling their name once outside of the hotel in the front.

Perhaps just the buzzing energy of the city itself has kept the spirits around the Hilton Riverside alive. 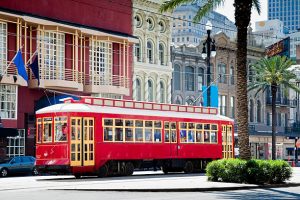 What do you think? Can a modern hotel such as this one be affected by the history and hauntings of the land itself?