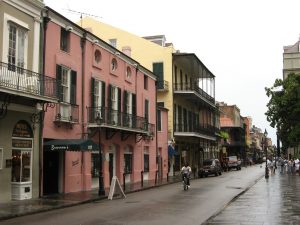 One of the most highly regarded hotels in the Crescent City, the Omni Royal Orleans hotel attracts visitors from the world over — a lap of luxury in a cultured city; what more could one ask for?

As you approach the Omni Royal Orleans, just the staggering size and design of the building may sweep you off your feet. The four-story, whitewashed facade welcomes you in, pulling you close into its historical arms, ready to whisper about the secrets of its past.

Such physical beauty, but inside… such a dark and dismal past. Slavery, war, fire, and evil left their mark on the Omni Royal Orleans hotel, and the stains from its past can be seen clearly in the present.

The Omni Royal Orleans was initially called the St. Louis Hotel. It was built by Creoles who inhabited New Orleans, and it used to be a rival to another hotel that Anglo-Americans constructed — that one was the St. Charles Hotel.

The Omni Royal is situated within the French Quarter neighborhood of New Orleans, where it stands even to this day. The building was constructed in 1838, and early on, the Creole people utilized the hotel as a place where Creoles from all over could come to relax and unwind — or party, depending on the mood.

The Omni Royal was known in high society; it was a luxurious oasis in the city center. Despite its lively nightlife, the Omni Royal was also where wealthy citizens would purchase or sell enslaved people. Before the Civil War, the hotel was a significant slave trade hub in the south.

Regular auctions were held at the hotel, and plantation owners and people seeking domestic servants would make bids and purchase human beings within the hotel’s walls. While these enslaved people were waiting to be bought or sold, they were held captive in an unknown location in the French Quarter. The sales of enslaved people at the Omni Royal totaled around $50,000 — approximately one and a half million by today’s standards.

In 1841, fate looked to clean the slate, and fire swept through the hotel, destroying it. It was rebuilt rather quickly due to financial contributions from a local bank, this time with fire-resistant materials. The hotel also served as a medical facility for Union Soldiers during the American Civil War after the city was seized in 1862.

As Louisiana eventually gave into Reconstruction, the state purchased the hotel, and it became a Capital Building. Afterward, it was one of the occasional assembly locations for the Louisiana State Legislature.

The hotel switched hands almost constantly after the Civil War; a hotel left without an identity, its dark past all it had known. The condition of the hotel deteriorated, time taking bite by bite of the hotel’s former glory, gnawing away at it. An unnamed hurricane ravaged the city in 1915 and battered most of the French Quarter. The hotel would sit in anguish until around 1960, when it was rebuilt and named the Omni Royal Orleans. 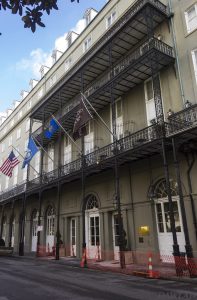 The Omni Royal Orleans… what stories could it tell? Source: Flickr

With a past including the horrors of slavery, it’s not surprising to hear that guests to the hotel today report seeing apparitions of forlorn folks wandering the halls aimlessly, hopelessly.

One account tells of the ghost of a housekeeper who walks up and down the hallways knocking on doors, perhaps looking to keep up with her daily work.

This spirit is also known to tuck guests into bed, arrange their toiletries, and repack bags for them.

More often, groans and crying are heard in the corridors. It’s sad once you remember the past of the Omni Royal, the thousands of human beings kidnapped and sold in the hotel headed off to unknown fates and abuse.

Others are (un)lucky enough to see half-visible apparitions of African American people looking lost, walking around the hotel’s hallways. Once they realize they’re being watched, they vanish. There are no reports of them speaking or interacting with guests, so that they may be a residual haunting.

Residual haunting activity can occur when something traumatic or stressful occurs, such as murder. Negative energy is thought to remain trapped in a physical location, causing the atmosphere of the said location to imprint or record the events. Like a tape recording, it will play the events over and over again. The entities involved in this type of haunting are not aware of their surroundings — it is not an intelligent haunting, there is no interaction between the living and the entity. Residual hauntings can also be the imprints of overtly positive energy as well, such as parties, laughter, music, singing, or dancing.

Of course, much of the French Quarter, in general, is believed to be haunted. But how did the neighborhood itself become haunted, to begin with? One such event can be traced back to the late 1800s. From 1817 to 1905, the city faced a lengthy and deadly Yellow Fever epidemic.

The virus would spike in the summer due to the rising mosquito population, and it had gotten to the point where wagon drivers started to be known as ‘corpse wagons,’ collecting the city’s dead and burying them in mass graves.

The lively party city of New Orleans is built atop one giant mass burying ground — can you imagine what types of hauntings this would stir up?

The Omni Royal Orleans hotel is yet another haunted location rising high above the hallowed ground of the city.