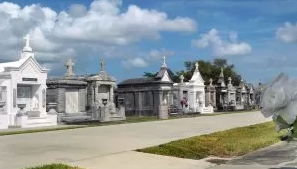 Built-in 1855, shortly after nearly 8,000 people died of Yellow Fever within three months, The St. Louis Cemetery #3, the lesser know counterpart of its sister cemetery the St. Louis Cemetery #1, is one of the finest hallowed grounds in the city of New Orleans. Located deep in the recesses of the city, off the gorgeous Esplanade Avenue, right off the serene Bayou St. John, this area has long served New Orleans for the most grotesque of purposes. Being on the outskirts of the old city, it was once used as a distant leper colony. In the late 1700’s Governor, Bernardo de Galvez banished such exiles to the border of the Bayou St. John to protect the well-being of his city’s residents. Later on, other Governors were kind enough to build residencies for the ill-fated people of the Bayou land. Slowly but surely, as it was imminent, death came to them and the area became a cemetery. Officially sanctioned in 1850, with burials not starting till 1855 and full construction not till 1856, this special tract of land, plagued with death has its fair share of visitors from both our world and beyond.

A Cemetery of Necessity

While the population of New Orlean grew to incredible heights during the mid-1800s, so did its death rate. The Louisiana Purchase, signed in December of 1803, led to a huge explosion of American Protestants moving to the region in the hopes of making their fortune off the cotton, indigo, sugar, and insidious slave trade. Many of them faced the challenges of dealing with the mosquito population and ultimately failed. Yellow Fever and Malaria were rampant throughout the city, but especially in the new northeastern who had not developed generational immunity to the disease. In addition, Cholera was common as bodies buried below ground, as was the Protestant custom of the northeast, quickly floated to the surface due to the high water table. The old St. Louis #1 and its sister the St. Louis #2 were quickly filling to the brim. A new cemetery was needed away from the expanding city center. And thus out of necessity St. Louis 3# was born. 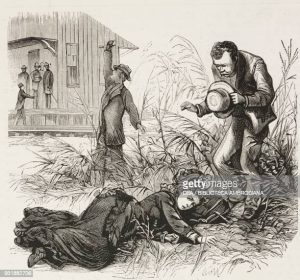 Compared to the cluttered St. Louis #1 and slightly more organized St. Louis #2, it was a more orate and organized establishment. This attracted the newly found middle-class society of New Orleans and soon its gates were filled with some well-to-do recently deceased citizens of the Crescent City. Many famous chefs call this cemetery home including but not limited to; Guillaume Tujague, founder of the second oldest family-owned restaurant in New Orleans, Leah Chase, founder of Dookie Chase’s and inspiration for the Disney movie The Princess and The Frog, and Paul Prudhomme, the chef who brought Creole cooking to the world. The tomb of well-known architect James Gallier, Sr. resides not far from Prudhomme. He built some of the most recognizable buildings in New Orleans history; Gallier Hall, and St. Patricks Cathedrals. He helped to redesign the Old US Mint Building, now the New Orleans Jazz Museum, and the Pontalbla Buildings, the latter being some of the first apartments in the United States. Tragically he died in 1866 as a hurricane-ravaged a steamboat he and his wife were traveling to New Orleans on.

The Ghosts of the Tujaque Family Restaurant

Guillaume Tujague opened up Tujaque’s at 811 Decatur street before moving three doors over to 823 where they remained until 2019. Did you know the building was formerly occupied by Madame Beague’s Exchange? This establishment is credited as being the inventor of brunch! Although bottomless mimosas did not come into the picture until much later on. The original Tujaque’s was a gentlemen’s only bar, while that is no longer the case up until they moved they were the longest-running standing bar in New Orleans. No bar stools allowed! Their bar staff invented both the grasshopper and whiskey punch. 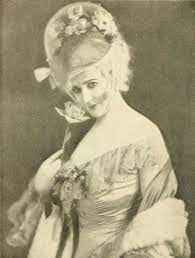 A photograph of Julian Eltinge from 1921
Source: WikiCommons

While it was strictly a gentlemen’s bar there was one lady who was a frequent patron. In the early 1900’s it was common for male actors to dress in female garb. It was less common for them to do it in public. Eltinge also owned its own lines of cosmetics. An early forerunner to drag brunch perhaps! New Orleans has always been acceptable to people of all sorts and they were accepted at the bar. Vanity ran deep in Eltinge, as it does many actors, and after their passing, a photo was hung in the dining room. The company changed management in 2013 and brought the photo up to the attic. Soon enough poltergeist activity began in the dining room and the restaurant. It was brought back and hung there until the restaurant moved in 2019 to its current location on 429 Decatur Street. It is uncertain if the picture itself held Eltinge’s spirit or if he was inhabiting the building but the only way to find out is to visit their establishment for some of the finest Creole cooking in the city. It is believed that Madame Beague, the original profiteer haunts the building as well. Many have seen her on the second floor and often loud noises emanating from the top of the building, chairs moving on their own and the sound of dishes can be heard breaking in the kitchen. Maybe she just wants the credit she deserves for bringing brunch to the world!

Curse of the Galliers

The Gallier family was one of the most prominent architectural families in New Orleans. An Irish immigrant, James Gallier, Sr. overcame obstacles as an Irish man in the 1800’s. Gallier designed some of the most iconic buildings in New Orleans; the St. Patricks Cathedral, the first non-French or Spanish Cathedral in New Orleans, and Gallier Hall, New Orleans’ ornate greek revival city hall until 1956 are some of his greatest works. Tragedy struck when he and his wife were killed in a steamboating accident off the coast of Savannah, Georgia in 1866. His son, James Gallier, Jr. continued on with his father’s profession and designed the ornate tomb we see in St. Louis Cemetery #3 today. He passed merely two years later in 1868 due to yellow fever. Seemingly a curse fell upon their families. Gallier Jr’s former home in the French Quarter is open to tours and is decorated with original furniture and decorations from the period. 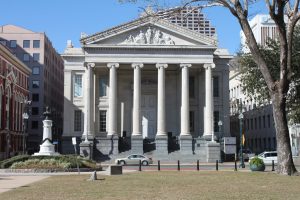 Gallier Hall. Considered one of the finest pieces of Greek Revival Architecture in the United States Source: Flickr

Despite its disease-ridden history the St. Louis Cemetery #3 is home to some of the most beautiful and easily accessible tombs in the city. It is open to the public from 9-5 pm and guided tours are offered of it along with the other “cities of the dead” sprinkled about the city.