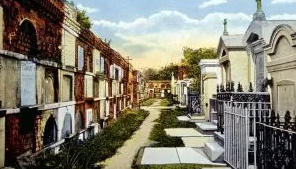 The St. Louis Cemetery #1, perhaps the most famous cemetery in all of America, lays nestled on Basin street between the historic French Quarter and the cultural center of the city, the Tremé. Its decrepit walls bulge outwards into the street, as if to suggest that it can no longer help to contain the massive amount of death the Crescent City has endured.

Built on August 14th 1789, the St. Louis #1 was the first of forty three above ground cemeteries that began to appear throughout New Orleans and is accompanied two sister cemeteries in other parts of the city. These above ground tombs came to popularity as the city was dealing with the pressures of a high death rate and water table. Did you know they operate as slow working furnaces and can hold up to 60 to 100 people each? It is still an active cemetery and as such interments still continue even to this day. Many famous historic figures lay in the St. Louis #1 today; Voodoo Queen Marie Laveau, architect Benjamin Latrobe, first US Chess Champion Paul Morphy and even Nicolas Cage (as least his tomb) are inside the walls of the St. Louis Cemetery #1.  Some say their spirits even remained behind!

The Formation of the St. Louis Cemetery #1 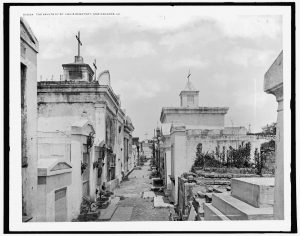 New Orleans and death have been entangled intimately since they city was founded in 1718. Disease and pestilence was common due to the large amount of mosquitos in the swamp land. Malaria and yellow fever ravaged the population of New Orleans each summer. In conjunction with this the water table was extremely high. This led to the above ground tombs we see today. Originally the dead were buried below ground behind and beneath the St. Louis Cathedral , near the river by the levee and in the St. Peter cemetery. This quickly became a problem as bodies and caskets would simply float away during flash floods that happened all too often. Meanwhile people were dying in the thousands. Between 1817, when records began, and 1905, when a vaccine was invented, nearly 41,000 people died of Yellow Fever. Very quickly the St. Peter Cemetery became a cess pool, riddle with disease. Many began using it as a dumping ground for their sewage, waste and even farm animals.

The St. Louis Cemetery #1 was originally used as a below ground cemetery, but by 1803 the Spanish, who ruled the colony from 1763-1803, had set a decree that all burials had to be above ground. Originally the cemetery stretched across what is now Basin Street. After the completion of the Carondelet Canal, the grounds were cut in half. In 1847 many bodies were transported to the St. Louis #2, directly behind the St. Louis #1, but as railroad lines were built in place of the Canal various caskets were found. Eventually the St. Louis #1 and its above ground tombs became standard to New Orleans. However, many of the old below ground cemeteries still remain where they were today!

The famous Voodoo Queen resides in the cemetery and some say her spirit wanders between its narrow corridors. She died June 15th, 1881 and was interned into the St. Louis #1 in the family tomb of her second husband, Chirstophe Glaupion. Some believe she was later removed and move to tombs elsewhere in the city. Today her tomb is one of the most popular grave sites in all of the United States. Visitors often leave offerings such as coins, candy and tobacco in hopes that she grant them their ultimate desires in the afterlife. A tradition of drawing three X’s on her tomb began in the early 1900’s. It is believed they began as three crosses and the X’s came later on as a symbol for Papa Legba, the Voodoo spirit that opens the portal between life and death. Whatever the case, this is now illegal and marking her tomb will amount to a hefty fine and jail time. The St. Louis #1 became a national landmark in 1974 and is now federally protected. 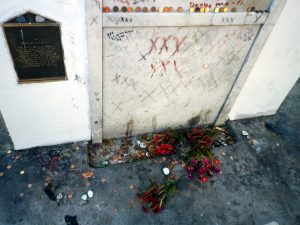 Many leave offerings to Marie Laveau to procure blessings from her
Source: Flickr

Some say the spirit of Marie Laveau remains behind in the cemetery and in the city. She is revered as a sprit to worship in New Orleans and this cannot be found in any other region where Voodoo is active. In the 1930’s the Works Progress Administration did a series of interviews with elderly African American folk in New Orleans. One man named Eugene Lee Banks claimed to have met her one night long after he death during a stop at a drugstore near the cemetery. “She just laughed and laughed and said ‘Don’t you know me?’” Banks responded “Where did the drugstore man go?” He had previously ran to the back of the store knowing exactly who she was. She responded by smacking the face and in his words “jumping up in the air, whizzing out the door and passed right over the graveyard wall and disappeared.”  Learn more about Marie Laveau with a Voodoo tour! 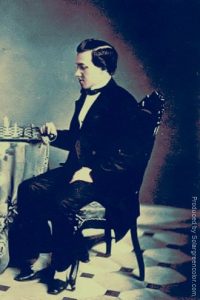 Paul Morphy was a prodigy, a chess champion the world had never seen before. Born in New Orleans in 1837, he beat renowned chess champions across the US, as a mere child! He traveled to Europe to challenge the best in the world and he beat them all, oddly refusing any prize money due to him, simply playing for love of the game. By 1860 he retired at the age of twenty two, bored with the game and bitter about his new found fame. Upon returning to New Orleans he attempted to pursue a career in law but many of his clients wanted only to talk of his chess career. His mental health quickly began to decline. He came bitter and paranoid. Resented money and the people around him trying to care for him.

Stories say that one day he was found running around outside his childhood home, 1113 Chartres street, completely nude with an axe. His family had previously attempted to bring him into the care of the Ursuline Nuns across the street. In 1884, at the age of 47, he had died of a stroke in his bathtub, in his home that is now the Brennan restaurant. Chess pieces adorn his tomb in the St. Louis #1. Many Chess fanatics travel to New Orleans today to pay tribute to this  tortured master.

The St. Louis #1 is just one of many above ground cemeteries in New Orleans and each holds its own stories and spirits. Learn more about the people that rest and reside in these cities of the dead. The St. Louis #2 and #3 hold their own secrets waiting to be discovered!