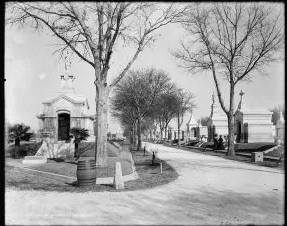 At the top of New Orleans, the largest cemetery of forty-three acres careens over the I-10 interstate. The grandiose pillars and rooftops of the Metairie Cemetery’s decorated tombs are often the first sight many visitors to the Crescent City witness as they drive from the Louis Armstrong International Airport. At over one hundred and fifty acres, it is the largest cemetery in New Orleans. Although hard to decipher from the freeway, its lumbering alleys and corridors roll and curve spaciously along the backside of the city away from the eyes of most. Established in 1872 by the founder of the corrupt Louisiana Lottery, Charles T. Howard, it took the place of a once beloved race track. The Metairie Cemetery, upon construction, was deemed a public works project in addition to being a spacious cemetery. An urban park of sorts. The city was growing and new cemeteries were needed to replace the cramped, decrepit cemeteries of the downtown area. This attracted many wealthy occupants; author Anne Rice, Police Chief David Hennessey, 1st American Governor W.C.C Claiborne, and head madame of Storyville Josie Arlington are all laid to rest here. Although some never truly rested!

Luxury in the Afterlife 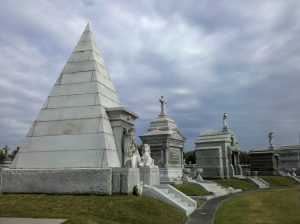 Much of what is told about the Metairie cemetery involves the age-old New Orleans feud of Creoles vs Americans. As the Louisiana Purchase was signed in 1803 more Americans moved from the burgeoning and young United States to the former French and Spanish cities. Since then they have never truly gotten along. Charles T. Howard was an American trying to join a Creole race track. He waited until they all died and in 1872 and bought the old race track. Turning it into the cemetery we see today. Although this may have been slightly true, the reality was that the Civil War damaged the city’s economy beyond repair and he was seen as a wealthy benefactor in a time of need. Cutting his losses he struck a deal with the city and turned the old race track into the largest more luxurious cemetery the city was yet to see. He is now entombed on Central Avenue which runs along the old oval racetrack.

Metairie Cemetery today has the largest collection of marble tombs in New Orleans history. A testament to the wealthy individuals that were laid to rest here. It was one of the only cemeteries developed in the 1800s to have an actual plan. Designed to resemble the elegant and spacious rural cemeteries of the east coast, it was brilliantly designed and not pieced together bit by bit as was St. Louis Cemetery #1 and its counterparts. The tombs built here were not the simple Neo-classical rectangular designs seen in the older cemeteries but were adorned with regal statues, and elegant edifices and laid out in all types of architectural styles. Egyptian Revival, Greek Revival, and odd otherworldly designs scattered the large landscape of the Metairie Cemetery. But just like any other cemetery in New Orleans, there are of course otherworldly visitors haunting its hallowed grounds.

Storyville was one of the most notorious times in New Orleans history and Josie Arlington became one of the most notorious women involved in it. A red light district that operated between 1897 and 1917, it became an incubator of Jazz music, prostitution, and heavy drinking. Stretching from Canal to St. Louis in the Treme neighborhood above the French Quarter, Storyville remains today the city’s most deb yet endearing time period. Arlington was born Mary Anna Deubler in 1864 and was soon orphaned four years later after the death of her parents. By the age of ten, she entered into a life of prostitution and changed her name to Josie Arlington. Finding a violent life ahead of her she did what she could to survive. Opening her own brothel led to even more complications. She had to evict her then-husband Philip Lobrano from the premises after he shot and killed her brother during an altercation. Prior to that she got in a fight with another lady of the night and bit her ear off! A violent life indeed! 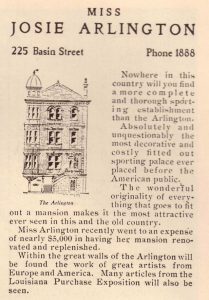 But by 1897 she opened up her own house of prostitution, determined to turn her image around. She marketed it as a high-class home where the most refined gentlemen could enjoy exquisite foreign women in peace and outlawed brawling, at least to the best of her ability. Money was ample for Arlington but trouble followed and in 1905 a fire ravaged “The Arlington.” Her mental health took a steep decline in 1913 and she suffered from a horrid bout of dementia and became obsessed with death. Buying a $2,000 plot of land in the cemetery along with an $8,000 tomb atop it. The tomb featured a young woman bearing a wreath, touching the grand door of the brazen red granite tomb. Two large flaming urns, atop pilasters, gracefully decorate either side of the otherworldly door. 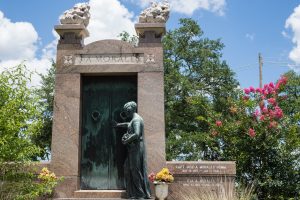 The hard and violent times that Josie Arlington encountered did not cease after her death in 1914. Her partner, Tom Brady, married her nice shortly after her death. The two squandered her large fortune within a matter of years. By 1924 her tomb and been foreclosed and her remains were transferred to an anonymous vault within the Metairie Cemetery. Not only has her spirit been seen wandering the grounds of her old tomb. Many have claimed to have seen the statute in the doorway walking around the area, perhaps possessed by the spirit of Arlington, and even banging on the bronze knockers on the tomb’s door. A street light was placed across the street from her tomb and would illuminate its decorated doorways at night. Some even claim to see the fire in the urns beside the door. The light has since been removed and she now lays dark at night, but many still gather to see her aimlessly wandering, searching for peace in the afterlife. A simple joy she never received in life.

Over nine governors and seven mayors lay within the boundaries of the Metairie Cemetery. Famous mob bosses, authors, singers, and a plethora of wealthy New Orleanians call this majestic cemetery home. Unlock the magic of the many cemeteries in New Orleans yourself and take a tour of one today!