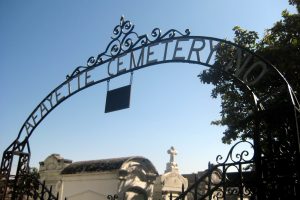 Palatial Mansions from a civilization past, nearly lost to the justified ravages of a civil war, tower over the Lafayette Cemetery #1. Contrariwise, the culinary capital of New Orleans, Commander’s Palace, sleepily awaits for its doors to open, shaded by the majestic live oaks bursting from the cracked and cragged sidewalks. The Lafayette Cemetery #1 is one of the most famous cemeteries in New Orleans. In contrast to St. Louis Cemetery #1, whose fame comes primarily from its inhabitants, the Lafayette has been seen in more films, tv shows, and music videos than any other cemetery in New Orleans. The St. Louis #1 had the unique pleasure of being in the 1969 counter-culture staple Easy Rider. Illegally used as a backdrop for a psychedelic freakout, it would be the first and last film shot there. The Lafayette Cemetery became the standard for cemetery scenes past this. Interview With The Vampire, Double Jeopardy, Hard Target, and Deja Vu, among others, have been filmed here. The popular TV series The  Originals used the cemetery’s squared-off alleyways. Master P, LeAnn Rimes, and even New Kids On The Block have shot music videos here. 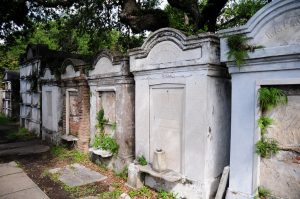 Officially sanctioned as a cemetery in 1833, the Lafayette Cemetery was one of the first official protestant cemeteries in a predominantly Catholic city. Before this and the founding of the Girod Street Cemetery in 1826, Protestants were buried below ground at the back of St. Louis Cemetery #1. As the city’s Protestant population grew due to the Louisiana Purchase, the city and that small squalid patch of land at the back of the old cemetery became overcrowded. The Garden District was soon formed as part of this boom. Formerly the Livaudais plantation, it was developed by French architect and planner Barthelemy Lafon, along with much of the upriver side of the city. In 1833 it became the City of Lafayette, ironically named after a French war hero, and was a Mecca for American Protestant Culture. The wealthiest of Americans lived in the Garden District, and their extravagant spending left us with homes that can run up to $5 million or more today. To see them and learn more about this opulent time, take a tour of the Garden District!

Despite their wealth, death, as always, acted as the great equalizer. Americans upriver were not spared the horrors of yellow fever that their Creole counterparts downriver experienced. At first, below-ground burials were preferred, sticking with Protestant customs. But due to the city’s high water table and marriages between Creoles and Americans, above-ground tombs soon became standard in Protestant cemeteries as well. Always the industrious types, the Americans invented a new kind of tomb. These graves called coping tombs, allowed soil burial without the hazard of the casket or bodies floating away. They are large open chambers framed with brick, stone, and plaster, with walls reaching up three feet above the ground. The chamber is then filled with sediment, and caskets are lowered into the ground. One such coping tomb holds forty-eight caskets inside! Up to 7,000 people are interred in Lafayette Cemetery #1, and it’s known that many of these eternal residents of the area never fully rested.

The Ghosts of Commander’s Palace

Being located across the street from a cemetery full of over 7,000 people is bound to attract a spirit or two. Opened in 1893, Commander’s Palace has become a staple in New Orleans culinary culture. Bought by the prominent Brennan family in 1973, the same who painted its famous Commander’s Palace blue, the restaurant has been commanded by a slew of reputable chefs. They say some even remained behind in the afterlife to look after it. Most famously, Emeril Legasse was a head chef here from 1983 to 1990. Before him, it was Paul Prudhomme, the man who brought Creole and Cajun cooking to the American public. Emile Commander was the first head chef from whom the restaurant gets its namesake. He brought the restaurant to international popularity by 1900. He died of tuberculosis in 1906 while traveling in England. But ever the perfectionist, it is said that he returned to the restaurant to make sure operations were running smoothly. Many have seen him, mustachioed and properly dressed, as was fashionable then, meandering between tables to ensure that the service and food are top-notch. Perhaps he is proud of his restaurant’s accomplishments and has chosen to stay for all eternity. 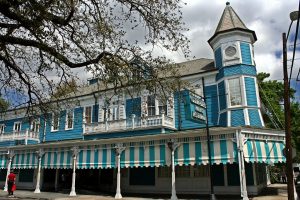 Many have also seen the spirit of a young girl in a white dress haunting the staircase and top floor of the building. It was common for children to contract yellow fever, a disease with high mortality that ran amuck in New Orleans. Spread by mosquitos, natural inhabitants of the swamp land, it killed over 41,000 people between 1817 and 1905. These were the only years kept on record, and many more were killed beforehand. 1853, the deadliest year of the saffron scourge, nearly 8,000 people died in New Orleans at its hands. In Lafayette Cemetery #1, there is a tomb that indicates three children died in 1878 at a very young age due to yellow fever. Perhaps this is what did this poor girl. Some have even seen the spirit of this young girl running around the cemetery. 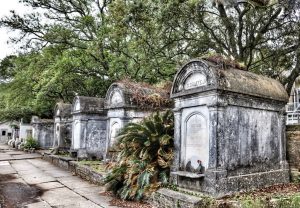 The influence of the Lafayette Cemetery extends far past its limits between Washington and Prytania street. It has been recreated in the popular video game Red Dead Redemption 2 and has been seen in many films. People come from all over to witness its majestic walls, hoping to recreate the magic they saw in their favorite movie or television show. Be sure to take a tour of the Garden District to see for yourself!