Haunts at the Beauregard-Keyes House in New Orleans 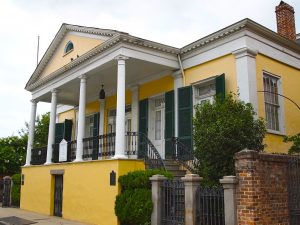 The Beauregard-Keyes House in New Orleans‘ French Quarter has truly seen it all — withstanding the test of time, this private residence-turned-museum has witnessed everything from Confederate generals to bloody mafia hits and has even served as the relaxing residence of a famous author.

The home was supposedly built atop sacred land (as declared by the King of France) and was first the residence of a local auctioneer. His time at the home wasn’t long, and it was soon sold to a local grocer — humble beginnings, so far.

The most notable owner of the home came next — Confederate General P.T. Beauregard. He had led the first charge of the Civil War and is the home’s namesake, though he only rented the property.

The house passed through a few other hands and bore witness to a few murders before it became what it is today. Let’s dive into the deep history and, of course, the haunts of this French Quarter masterpiece.

Looking to experience the history and haunts of the Big Easy for yourself? Join us for a hauntingly fun and historically accurate ghost tour!

History of the Beauregard-Keyes House

The piece of property where the home stands now was originally intended to be used as a weapons arsenal for the French military. Instead, Ursuline nuns moved in after arriving from France in 1726. The King of France at the time, Louis XV, gifted them the entire block. In need of some quick cash at their new home, the nuns sold off parcels of land to brokers and locals.

Unfortunately, one of the parcels was purchased by Joseph Le Carpentier, a local auctioneer — not a carpenter. He had his home built in 1826 and promptly moved his family in. Carpentier later had a grandson born in the house — Paul Morphy, the greatest chess player of his time.

Le Carpentier later sold the home to the Merles, a family of Swiss immigrants. Madame Merle was the one who designed and built the beautiful garden in the rear courtyard. The garden gave the whole block fresh air, filled with the scent of blooming flowers.

A grocer by the name of Dominique Lanata bought the home in 1865. He was also the Consul-General of Sardinia in New Orleans. He owned the property but never lived there. He rented it out to tenants for extra income. Lanata’s first tenant would be the most memorable one — Pierre Toutant Gustav Beauregard, General of the Confederate Army. Beauregard is credited with starting the Civil War, leading the attack on Fort Sumter in 1861.

After the Civil War, Beauregard returned to New Orleans to find himself a job and landed the head office of New Orleans, Jackson, and the Great Northern Railroad. He stayed at Dominique’s place until he found a home on Royal Street in 1868.

The home was sold to the Giacona family in 1904, who were a part of the Sicilian Mafia and part of the New Orleans chapter called the Sicilian Black Hand. The family sold liquor illegally and ran a wine cellar on the home’s first floor.

Their lavish lifestyle caught the attention of the Black Hand — they had grown too powerful. The other mob bosses felt the Giaconas were encroaching on their territory and the family had not paid their dues. Pietro Giacona, the head of the family, heard this talk and made his move to settle the score.

Pietro invited four other members of the Mafia over for dinner to talk. Mid-meal, they pulled out their weapons and started to fire, killing three Black Hand members in the process.

Using their connections, Pietro and his son got off scot-free, but they were paranoid; the family boarded the home up until it resembled Fort Knox. The family patriarchs took off, leaving their children to foot the tax bills. The home started to fall apart, and the garden became just an empty, overgrown field. They later sold the home in 1925.

An Author Steps In

Antonia Mannino, who was married to a member of the Giacona family, bought the home. He threatened to have it torn down and replaced by a macaroni factory if preservationists didn’t buy it. A local family took it off his hands, but it was author Frances Parkinson Keyes who showed interest. After purchasing the home, she started renovations. She even restored the once gorgeous garden.

Keyes used the home as a winter house, traveling between New Orleans and New Hampshire. She wrote 30 novels while living in the Beauregard-Keyes home, including  ‘The Chess Players,’ which was about Paul Morphy. Keyes lived in the home until she died in 1970. Her namesake foundation, the Keyes Foundation, took over and turned the home into a museum.

Haunts of the Beauregard-Keyes House

The intriguing and rich history of the home has left behind an immense legacy. The home is said to be haunted and has been since its beginning. 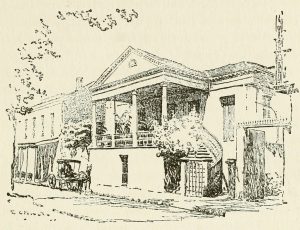 The Beauregard-Keyes home has seen it all. Source: Wikimedia Commons

Paul Morphy was said to be driven mad while living in the home, having been born and found dead there. He claimed to have been chased from the home by demons and was found naked, running down Chartres Street with an ax, threatening to kill anyone who came close to him. Though he claims he had been possessed, it’s hard to say exactly what caused his violent outbursts.

The spirits of numerous Civil War soldiers are also said to reside at the home. Witnesses state that they’ve seen the apparitions of countless soldiers wandering about the property. However, the most disturbing part of this is that they are all wounded, missing limbs, bleeding — you name it. They tend to stare off into the distance and disappear if you get too close. Rumors state that they are Beauregard’s men from the Battle of Shiloh, one of the Civil War’s bloodiest battles.

Of course, Beauregard himself has also been seen at the house. Keyes once stated that she often saw his apparition late at night, looking for his boots. According to Keyes, he left his boots somewhere in the home before moving, and his spirit is stuck in an endless loop looking for them.