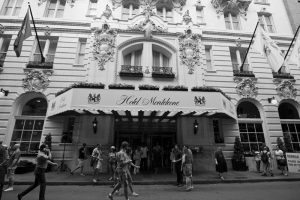 When Antonio Monteleone ventured from Sicily to America at the turn of the century, he had no idea that he would end up building one of the most unique hotels in the world! The Hotel Monteleone is a gorgeous Beaux-Arts-style hotel in the French Quarter of New Orleans, known for its history and luxury.

The hotel is one of three in the country to be designated a literary landmark by the Friends of the Library Association. Why is this? Countless authors from around the country, particularly the south, were frequent guests at the Monteleone. Among them were Ernest Hemingway, Tennessee Williams, and William Faulkner.

Many of these writers also reference the historic lodging in their works. Hotel Monteleone is home to a stunning history alongside a long list of strange occurrences. So, come with us and explore why the Hotel Monteleone remains one of the French Quarter’s most impressive haunts.

Antonio Monteleone was an Italian cobbler who ran a modest shoe shop in Sicily. Sometime in the late 1800s, he grew weary of his small-town ways and set sail for America to find new opportunities. Finding his way into New Orleans, Antonio continued fabricating fine footwear and set up a shop on Royal Street, frequented by Big Easy’s high society. The shop prospered, and Antonio began to set his sights on bigger and better things.

In 1886, a small hotel, The French Quarter Hotel, opened up on Royal Street. It was later put on the market — Antonio jumped at the opportunity that had appeared before him. Shortly after he acquired the quaint hotel, he bought another lodging, the Commercial Hotel, next door. He was taking his first steps toward building an empire of luxury hotels, all in the heart of New Orleans’ most historic center.

Antonio combined his two properties and kept the name of the Commercial Hotel. He continually expanded it, adding 30 guest rooms in 1903. In a significant move, he hired architects to build him three hundred more guest rooms in 1908 during an economic downturn — many other entrepreneurs were tightening their purse strings while Antonio was out to make more money.

His hotel grew, and he proudly named it after himself — the Hotel Monteleone was born.

Antonio passed away in 1913, and his son Frank took over the hotel’s operations. Even through the Great Depression, Hotel Monteleone was the only one to stay open and welcome guests during the crash. By this time, Frank’s son Bill was running the hotel, the third generation of the Monteleone clan to do so.

Significant changes occurred at the hotel in 1954. The building was beginning to show its age, and the original structures were starting to fall apart. Bill demolished the entire hotel and began to lay the foundation for a massive, new hotel. The revamped Hotel Monteleone was built in the same classic style, which complimented the theme of the buildings surrounding it. In 1949, the famous carousel was built into the hotel. The carousel is a carnival-themed bar and is Louisiana’s only rotating bar.

During its early days, the bar was next door to a hip nightclub called the Swan Room, where big-name musicians like Liberace and Louis Prima played to adoring ears. Even today, you can probably spot a few celebrities sipping on a cocktail.

The Hotel Monteleone was hugely popular with writers from all genres — Ernest Hemingway, Anne Rice, John Grisham, and Stephen Ambrose were known to frequent the hotel. Tennessee Williams referenced the hotel in The Rose Tattoo and Orpheus Descending. Rebecca Wells included the hotel in her novel Divine Secrets of the Ya-Ya Sisterhood. Ernest Hemingway referenced it in his short story Night Before Battle. 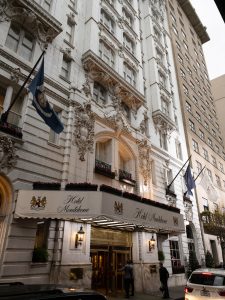 The beauty of the Hotel Monteleone is obvious from the street below. Source: Wikimedia Commons

The hotel was special to lots of guests, it seems. It was loved, unlike any other hotel of its age, it was the meeting place for friends and businessmen, celebrities and locals alike. It’s no surprise that the hotel is reportedly haunted these days, frequented by the same guests who adored it so much in its heyday.

Spirits of the Monteleone

There’s no such thing as a century-old hotel without a few ghosts hanging around! Especially in New Orleans. The spirits of this hotel are known to stick around the 14th floor, which unironically is actually the 13th floor.

One of the hotel elevators tends to stop on the 14th floor on its own, almost as if it’s luring guests to take a haunted stroll down the hallway. On occasion, this happened while a drunk and flirty couple were getting busy on the elevator, and they unknowingly got off on the 14th floor. While getting lost in the hallway looking for their room, they began seeing the ghosts of young children. As they continued walking down the halls, the air grew colder, and when they turned a corner, they saw the apparitions of dozens of children playing in the hall, dressed in early 20th-century clothing. The children all stopped playing to stare at the couple. Shocked, they turned around and high-tailed it back to the elevator.

On another occasion, a mother and her two young daughters stayed on the 15th floor. Every time they took the elevator, it stopped on the 14th floor instead. Her daughters, understandably frightened, no longer wanted to take the elevator and would rather make the 15-story trek up the stairs. The mother left her children in the room and tested the elevator herself. After riding it up and down the building a few times, she assured her children that it was safe. The next time the family went downstairs, the elevator again stopped on the 14th floor. It seems the children of the halls want someone to play with.

The ghost of a young boy named Maurice Begere also haunts the 14th floor. Maurice Begere often stayed at the hotel with his parents, Jacques and Josephine. They usually spent their weekends between the Hotel Monteleone and the French Opera House on Bourbon Street. Children weren’t allowed at the opera, so Maurice was often left at the hotel with a nanny. One night, Maurice contracted a terrible illness. He had an abnormally high fever and began having convulsions. Maurice died that night. His parents returned to find their son dead in the hotel room. Josephine was devastated and was compelled to return to the Hotel Monteleone every weekend to contact her son’s spirit. Eventually, she was reportedly successful. Josephine was brought to tears as her son spoke to her. “Don’t cry, mommy, it’s ok,” he said.

The spirit of Maurice Begere still roams the halls of the 14th floor, where he died. Guests might hear his childish laughter as his ghost walks in and out of their room at night. He usually seems to be playing or looking for his parents. He likely hangs out with the other ghost children on the 14th floor.

Have you ever stayed at the Hotel Monteleone? Why do you think so many child spirits have stuck around?

Is The Hotel Monteleone In New Orleans Haunted?

The Haunted Tale of Maurice Begere