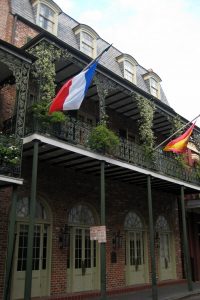 The Hotel St. Pierre is nestled comfortably just two blocks from Bourbon Street in this historic French Quarter of New Orleans. It stands proudly at the corner of Burgundy and Dumaine Streets and is a stunning example of French Colonial architecture with a taste of modern flare.

The hotel is a quiet respite from the hustle and bustle of the commercial section of the quarter. It boasts twelve buildings, seventy-one guest rooms, and even six courtyards. It’s a luxurious mini-estate, offering guests the best of the best that the French Quarter has to offer. Fountains and pools dot the property, an oasis in the Crescent City.

It’s been ranked by the New York Times as one of the ‘Best Places to Stay’ in New Orleans and is one of the oldest in the entire city. With its longevity and history, the Hotel St. Pierre is home to more than just a couple of ghosts who have decided (or perhaps not) to call the hotel their permanent otherworldly home.

The History of the Hotel St. Pierre

Although New Orleans was founded in 1718, many families purchased the land that ran along the Mississippi River. The better the land, the more chances for profit. Gabriel Peyroux, born in France, wasn’t unlike the other French colonists in the region with their bright eyes and bushy tails.

Peyroux married Marie Susana Came, a native New Orleanian, and they moved out to the St. James’ Parish along River Road, where Peyroux found a living practicing as an apothecarist. They built a lovely home for themselves and the few children they ended up with.

In 1772, Peyroux was granted free land — and extraordinary land at that. But he had no idea that he had inherited anything at all. Two years went by, and the land was then promised to Miguel Chiason and Francisco Antallia, and unlike Peyroux, they were more than willing to get their new land prepped and primed for their money-making business ventures.

They spent their time surveying the land, constructing levees, and creating a road along the riverfront. Then, they finished! The land was ready to go, and all of the money they sank into it was ready to return to them.

However, Peyroux finally discovered he was deeded that plot of land all those years ago. He petitioned the government to recall the land and won in court. Chiason and Antailla were left with nothing to fight Peyroux’s petition as they had sunk it all into the land. However, they were booted from the property — Peyroux did agree to pay them the sum they had already invested.

In 1777, Peyroux, his wife, and their children moved onto the property he was deeded to five years prior.

A few years after their move to the Peyroux family property, Gabriel Payroux commissioned a new home to be built in 1781. It was built in the popular French Creole style.

The bricks that made up the home were made of Mississippi River mud, horse hair, and Spanish moss. This architectural style was most common in Louisiana in the 18th century, although very few examples exist today. Hotel St. Pierre and Lafitte’s Blacksmith Shop are some of the last in the city.

Just as builder Maurice Milon was about to finish the home, Peyroux had him dismantle it. It was later rebuilt at 911 Burgundy Street where it stands today.

The Peyrouxes chose this corner because of Susana Peyroux’s father, Francois Caue — how owned the entire block since 1754.

Thankfully, this was Peyroux’s final move, and he lived out the rest of his days until he passed in 1794. He was one of the first licensed pharmacists in the colony, and the King of Spain had approved him to operate after Louisiana was sold to Spain in 1762.

Susana Peyroux continued to live in the family home, which escaped the Great Fires of 1788 and 1794, until her death in 1838. One of their daughters also lived in the three identical ‘sister townhouses’ just a few blocks from the Peyroux estate. Sylvian Peyroux, one of the sons, became a wine merchant in New Orleans and built the Three Oaks Plantation in 1830. He was so rich that he owned ten properties at one point, a feat for a man of his time!

Between 1916 and 1950, the property where the Hotel St. Pierre is today had a brief stint as a department store named D.H. Holmes Ltd., and during this time was when many of the other cottages were brought in for use.

Soon, 1017 Dumaine Street came to fame as the first-ever jazz museum in the entire world. Memorabilia were collected as part of its permanent exhibit, including the first records of Kid Ory, Jelly Roll Martin, and Cozy Cole.

In 1965, Louis Armstrong stayed at the Hotel St. Pierre, and the southern writer Tennessee Williams was known to frequent the property.

The Jazz Museum is now within the Louisiana State Museum, but many of the artifacts and collectibles are still on display in the lobby of the Hotel St. Pierre.

The Hotel is Born

Since it was converted into a hotel in the twentieth century, the Hotel St. Pierre has remained one of New Orleans’ most treasured and historic places to stay.

The hotel is listed on the National Register of Historic Places and offers guests excellent amenities, including valet parking, continental breakfast, and a snack stand.

The facade of the Hotel St. Pierre speaks volumes to the history of the building, and the interior labyrinth of courtyards tells of secrets that the hotel has hidden throughout the years. 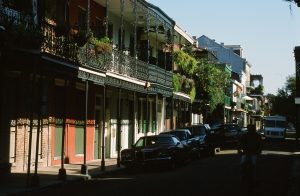 Imagine if these balconies could talk! Source: Wikimedia Commons

Even the cottages on the property date back to the 1700s, many of which were old carriage houses and servants’ quarters. This historical property comes with much more than just free pancakes and aesthetically pleasing decor — the hotel is well known all along the French Quarter for its ghosts.

Guests who stay at the Hotel St. Pierre report all kinds of ghostly happenings during their stay, especially in the old Peyroux House.

Icy touches are commonplace, with guests complaining of drafts and the feeling of cold fingers touching their skin.

What is most experienced is the sound of footsteps. One woman staying in the carriage house directly behind the front lobby area called to make a complaint to the staff. She was trying to sleep, and the heavy footsteps in the room above her kept her from sleeping all night.

Unfortunately, the noisy neighbor wasn’t of this world. No one was staying in the room above her that night. According to staff, ghostly footsteps are reported almost nightly. Perhaps it’s the Peyroux family checking in on the status of their old home, or maybe it’s the ghost of a Confederate soldier who is said to haunt the property.

Another ghost that haunts the front entrance of the Hotel St. Pierre is the apparition of a man believed to be the spirit of the carriage master. He’s said to be in his mid-forties, dressed in a matching blue shirt and pants combo with black boots.

It’s said that the apparition has been sighted on the carriageway at all hours of the day, soon vanishing after he is seen.

Who was this soul before his death? Was he an important part of the Peyroux household? So much so that his spirit is compelled to stay on the property and carry out his earthly duties? Maybe he is just welcoming the hotel’s current-day guests for their stay. You’ll see him if you choose to spend a night at the Hotel St. Pierre.