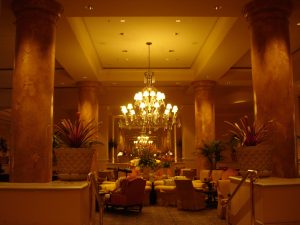 Located only four blocks from the French Quarter and Bourbon Street, Drury Plaza Hotel has been a New Orleans centerpiece since the building was constructed in 1917.

Drury Plaza Hotel occupies the historic Cumberland Telephone Building. When it was first built, the Times-Picayune declared its appreciation for the building in 1917:

‘It is the most attractive building in the city…’

History of the Drury Plaza Hotel

The building was well known for its intricate architecture and elaborate gardens. Built from reinforced concrete with a brick exterior, it was trimmed with terracotta and stone, a lovely facade. The interior was finished with gorgeous brass doors and marble window sills. Two towers surrounded the recreation area for Cumberland Telephone Company employees, with landscaping and seating areas. The building remained in operation as a telephone switchboard until 1938.

Drury Hotels restored the building to its former glory, with its terracotta detailing considered a distinctive and rare architectural style in New Orleans.

Aside from the unique styling and historical value, the Drury Plaza Hotel is also considered one of New Orleans’ more active locations, with hauntings and apparitions appearing and visiting the hotel from nearby locations!

Only two minutes from the Drury Plaza Hotel stands the Le Pavillon. Reportedly haunted by over one hundred entities, Le Pavillon is a one-stop shop for all of your haunted needs! According to many, Le Pavillon is the location of what some believe to be a ‘portal,’ a belief that there lies a door to the other side. 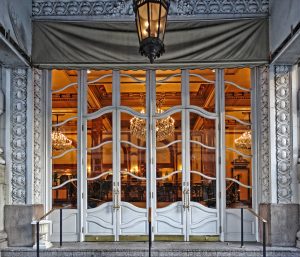 Le Pavillon has been nicknamed the Belle of New Orleans, but it hasn’t always been that way. At the turn of the nineteenth century, the grounds where the hotel was built were deemed dangerous and unliveable. One author remarked that the area was a place of foul deeds and midnight murders… doesn’t seem like the type of place you’d want to build a place of hospitality and relaxation!

A terrifying fact about the hotel lies atop its bar — it witnessed the infamous Valentine’s Day Massacre as it was imported from Chicago.

The St. Charles Streetcar, located directly by the hotel, connects passengers to one of the most haunted cemeteries in the county, the Lafeyette.

Most of the souls at rest in the cemetery died from Yellow Fever or the ‘Saffron Scourge.’ Between 1817 and 1905, when the last Yellow Fever epidemic hit America, more than 40,000 people died in New Orleans alone. There were between 150-250 funerals per day during this time.

The cemetery is the resting ground of countless famous burials, interesting sites, tablets, and tombs.

Visitors to the cemetery claim to witness apparitions and unexplained noises during their time on the burying grounds.

Located directly across the street from Lafayette Cemetery lies Commander’s Palace with its resident haunt — a middle-aged ghost, well-dressed with an impressive mustache!

Another apparition in the palace is that of a young girl coming down the staircase. Others report feeling a pretty dark feeling presence in the women’s restroom.

Aside from the numerous haunted locations close to the Drury Plaza Hotel, the hotel has been the location of more than a few strange occurrences. Visitors report seeing a strange black mass going through the lobby and up to guest rooms, disappearing through walls.

Others only report feeling the presence of entities, cold winds, and tingling sensations that cannot be explained by weather or nerves. Some guests who don’t even know the hotel’s history or the locations nearby report that they feel something strange when entering the hotel or even as they unload their bags from their car outside.

It’s no surprise, as New Orleans is one of America’s most haunted cities — the history is palpable everywhere you go, each building’s brick and mortar dripping with dark stories from the past — tales of tragedy, mystique, voodoo, sickness, and high strangeness.

Have you ever visited the Drury Plaza Hotel?