At one time the largest domed stadium in the United States, The Superdome was built in 1975 for the city’s beloved New Orleans Saints and the newly formed basketball team, the New Orleans Jazz. Before this, the Saints were playing football at the now-defunct Tulane Stadium. The idea was to build a world-class stadium for the fledging teams to bring fortune and fame to the city’s sports fans. The exact opposite happened. The Saints were so bad in the late 70’s they became known as “The Aints.” Fans often wore brown bags over their heads to games out of embarrassment. So what happened? Well, it turns out the Superdome and its adjacent event area, “Champion Square,” were built nearly upon former consecrated grounds. The Girod Street Cemetery was an active cemetery between 1822 and 1957. While the Superdome and Champion Square aren’t built directly upon it, many claim the proximity to the once overflowing cemetery left an indelible mark on the city’s sports history. In 2000, the Saints won a playoff game for the first time in 33 years. A Voodoo Priestess had blessed the Superdome before the start of the game to reverse the curse.

A Place For Protestants In The Afterlife

The first cemetery for the primarily Protestant population of the “American Sector” of old New Orleans, The Girod Street Cemetery, was deemed a public safety hazard and condemned in 1957. It consisted of some 2,319 wall vaults and 1,100 tombs. Some of these were family tombs with up to 30 people inside. Others, the much larger benevolent society tombs, were designed to help the city’s poor, immigrant, and African American peoples and could hold many more bodies. Wall vaults could hold up to 10 people each and were generally reserved for the poorest in the city, at a cost of about $600 in today’s money. “Some of the largest and finest tombs in the Protestant Cemetery are those owned and built by slaves,” writer C.W Kenworthy noted in 1854. The Girod Street Cemetery spoke to the multicultural history of the city and the dark roots of the slave trade. Many of these benevolent societies in the cemetery were organized by newly freed people looking for a better life. Due to the unique slavery laws in New Orleans, known as the “Code Noir,” many African Americans were able to develop communities and cultures unrivaled by any other US city. It is no wonder that when this cemetery was condemned, bad luck followed suit. 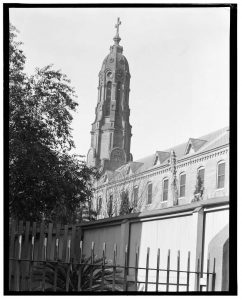 However, its importance dwindled as the city’s landscape changed. Jim Crow laws across the United States sequestered the lives of the city’s African American population. By the 1930’s it was noted by the Works Progress Administration that fig trees were growing out of decrepit tombs. Many were being used as makeshift homes for the houseless population, which was demolished in favor of economic expansion. World War 2 had given a considerable boost to the now booming business district. While this did lead to the preservation laws of 1974 that deemed many New Orleans cemeteries as national landmarks, it was too late for the Girod Cemetery. Later a shopping mall was built upon it, then lost during Hurricane Katrina, while the nearby Superdome became a beacon of hope for the ancestors of those once interned there.

The Curse of The Girod Street Cemetery

The deterioration of the Girod Street Cemetery was due to the lack of a perpetual care program. These programs allow tomb owners to pay the owners of cemeteries, generally congregations, a one-time fee to upkeep their tombs for eternity. Perhaps the curse was in place before the Superdome was even built. The Union Passenger Terminal station, built in 1954, originally occupied the former grounds of these hallowed grounds. As the cemetery was deconsecrated, the terminal expanded. This led to the removal of thousands of corpses and tombs. Many families were contacted to relocate their loved ones properly, and those without living relatives were moved to a crawlspace beneath the Hope Mausoleum on Canal Street. 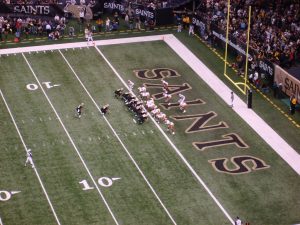 Some fans say it’s harder for the Saints to score on the side that is closest to the Girod Street Cemetery.
Source: Flickr

So, where did the spiritual essence of these forgotten citizens go? Many believe their spirits remain and continue to torment sports fans of the Crescent City. The Pelicans are notoriously bad, even though they made a strong run in the playoffs in 2021. The aforementioned curse of The Saints, aka “The Aints,” is the most famous of them all, but it even affected the other teams. The 34-minute blackout during Super Bowl XLVII held at the Superdome is also attributed to the curse. This game was between the San Francisco 49ers and the Baltimore Ravens but was held at The Superdome. Many say it would take other supernatural powers to quell the curse and bring sports glory for the first time to the Big Easy. By 2000, The Saints had failed to win a playoff game in 33 years. A local priestess named Priestess Ava Kay Jones performed an entire Voodoo ceremony the night of a wildcard game against the St. Louis Rams. The Saints went on to win that game 31-28. Their first playoff victory in franchise history.

The Curse Returns During Katrina

During Hurricane Katrina, The Superdome was known as the “Refuge of Last Resort” and housed 15,000-20,000 people. Half of the roof had caved in due to the storm, and as the disaster progressed, supplies were unavailable, generators failed, and many died due to the poor response and aid in the wake of the storm. Fresh water was unavailable, and refrigeration had failed inside the dome. Soon FEMA trucks were being used as makeshifts morgue for the dead inside the dome. Many died due to a lack of medical treatment. Some decided to take their own lives. One man jumped from a height of 50 feet from an upper level of the stadium. The city was under eight to twenty feet of water, and recovery seemed uncertain to many. But as New Orleans and its citizens have always done, they rebuilt and returned stronger than ever. September 25th, 2006, The Superdome held its first home game since Katrina, and season tickets sold out for the first time in franchise history. 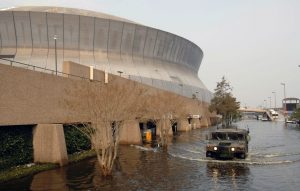 While Katrina remains a much larger issue to this day, as well as the record of the Saints, talks of the curse of the Girod Street Cemetery still circulate among fans and well-wishers alike. New Orleans is chock full of stories, spirits, and cemeteries. Some of these cemeteries can no longer be seen by the public eye but remain. Did you know that beneath the French Quarter lays the St. Peter Cemetery? It was the first official below-ground cemetery of the city and holds the remains of over 8,000 people—something to think about next time you stroll through the old city.

Refuge of last resort: Five days inside the Superdome for Hurricane Katrina