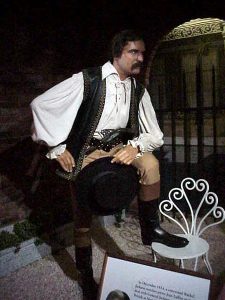 Also known as the ‘Pirate’s House,’ the Jean Lafitte House history starts with the infamous pirate himself, Jean Lafitte. Jean was a French pirate and privateer who operated in the waters of the Gulf of Mexico in the early 19th century. Jean is notorious for interrupting his smuggling to fight heroically for the United States in the War of 1812 — a true paradox.

Some say that he even ‘saved America’ by providing his army of smugglers, over 1,000, a massive asset to the American war effort. He was pardoned for his crimes later on after the war and the country was indebted to him.

Now, nestled on a tree-lined New Orleans boulevard in the world-famous and historic French Quarter lies an aqua-blue hotel that dates back to 1809. Don’t let its southern charm and beauty fool you, it’s considered to be one of the most haunted lodgings in all of Louisiana.

History of the House

During 1718, New Orleans’ French Quarter was just being planned and laid out. The need for a quick passage from the Mississippi River to Lake Pontchartrain was becoming glaringly obvious as trade began to pick up and the city started to grow.

Esplanade Avenue filled that role for the early 18th-century colonists. The avenue stretched five miles and became the most popular route the bring goods into the city from the river. As the 19th century rolled around, Esplanade Avenue watched proudly as homes began popping up in the area. Soon, the became the most sought-after residential neighborhood in the city, the most wealthy homeowners looking to get a piece of the Esplanade pie — but it was also used by merchants, sailors, and you guessed it — pirates.

Pirates of the Lafitte House

613 Esplanade Avenue was said to be the lovely living quarters of the legendary pirate Jean Lafitte. New Orleans’ historic connection with pirates started when the French Crown left colonists in Louisiana to fend for themselves. Smuggling and piracy quickly became the norm and Esplanade Avenue is believed to have been the best route to do so due to its easy accessibility.

It wouldn’t be hard to imagine Lafitte and his posse using the avenue as well. There does exist some proof that Jean did stay in the home, and it comes in the form of the underground archaeology of the house itself.

In 1984, the owner of the Jean Lafitte House hired contractors to install a below-ground pool in the courtyard. Digging into historic ground always brings up interesting and sometimes horrifying finds, like the man on Burgundy Street who dug up fifteen water-logged coffins from the 18th century as he dug a pool out for his family.

These underground mysteries remain that way until curious minds and savvy homeowners uncover them. It’s only when a business or resident begins to dig that historic artifacts and secrets begin to whisper.

As construction of the pool at the Lafitte house began, the contractors discovered an underground passage that ran parallel to the guest house and the Avenue. Could this have been an ultra-secret smuggling route? What else could that tunnel have been used for? Ponder that while we move on to the next piece of the Lafitte puzzle — the things in the walls.

Carpentry soon began to prepare the home for guests. Behind the plaster walls of the house were the original wood beams — not a groundbreaking find until you learn the background.

In the early colonization period of New Orleans, it was common for incomers to sail along the Mississippi River, and some were pushed back by the current and forced to abandon their route. Realizing they needed a safer way, many sailors left their crafts behind and sold the lumber for quick cash. The boat’s wood would then be used in manufacturing timber for homes, sidewalks, or anything else the city needed. In fact, most of the homes that border the river are actually built with the wood of these abandoned boats. 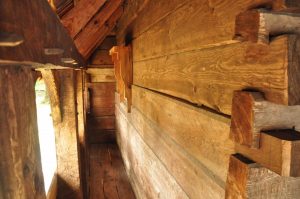 What secrets do the hidden beams at the Lafitte House hide? Source: pxhere

When the plaster at the Lafitte home was pulled back, old ship wood was discovered. Some of the beams even had the original bolts from the colonist boats.

While there are beautiful historic beams hidden at the Lafitte home, one begins to question what else hides behind its walls…

Hauntings of the Jean Lafitte Home

A building steeped in such history is sure to have some leftover spirits. History presents itself in obvious ways, through the old beams of the home to the underground passages that were once thought to be used by pirates. The Jean Lafitte House is so well-known for its hauntings that the main question of hotel guests isn’t about the pool, or when breakfast is, but ‘is this house haunted?’

There are a few hauntings at the Lafitte Home that are reported.

The Woman in White is seen on the property’s street-side window, dressed in a flowing and ethereal white gown. Her spirit is known to huddle in the corner of a side room that overlooks the courtyard. She is a silent ghost, floating around the home without a peep. Employees and guests alike have come across the mysterious woman, and while her identity is unknown, she is surely an integral piece of the hauntings at the Lafitte House.

One of the most commonly reported occurrences is that of unexplained noises, almost as if a huge party is occurring outside in the courtyard. Ghostly conversations and heated discussions are common, and guests have even woken up out of a dead sleep to check the street only to see no one alive below. Perhaps these disembodied voices and strange noises are coming from the spirits who once joined Lafitte for his banquets, celebrating the bounties of their labor.

According to staff, the most haunted place in the hotel is the guest house. One of the most astonishing stories is that of the owner when he was doing paperwork at the table of Unit 1. The owner had scattered these papers across the table alongside a glass of water. As he worked, he heard the glass slide across the old wooden table, looking up only to see the glass being slid by an unseen hand.

He couldn’t move or stop the glass before it reached the edge and then crashed to the floor, shattering. Of course, he didn’t stick around to investigate.

These days, the Jean Lafitte House is a small historic bed and breakfast that guests to New Orleans can enjoy the history and haunts of. This timeless property has seen scores of pirates, smuggling, and other moments in time that we can only ponder.