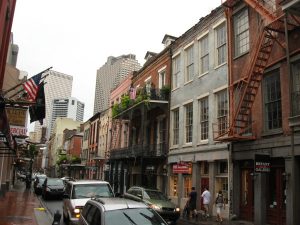 The Dauphine Orleans Hotel is just a block from the world-famous Bourbon Street. As guests make their way back to their rooms from a night out on the town in the historic French Quarter, they pass by the infamous May Baily’s Place, the lounge and bar inside the Dauphine Orleans Hotel, which has its own haunting stories to tell.

Once inside 415 Dauphine, the hotel envelops guests like a wave as the noise from the streets fades away and the quiet history of the hotel begins to whisper into their ears.

The Dauphine Orleans Hotel is an oasis — located right in the heart of the French Quarter. Its courtyards open into other courtyards, a labyrinth of beauty and relaxation.

With over 100 guest rooms, the hotel has rooms on both sides of Dauphine Street. It’s considered one of New Orleans’ finest lodgings, offering every guest a perfect stay.

Guests can choose to stay in a cottage, the Hermann House Guest Rooms, the main building, or perhaps The Bordello Suite, which is right above May Baily’s (which was once a licensed brothel during the nineteenth century.)

Its sketchy past lends to its reputation today as one of the most haunted hotels in New Orleans. But before we jump into the ghost stories, let’s sink into the history of the Dauphine Orleans.

History of the Dauphine Orleans Hotel

The history of the Dauphine Orleans plot of land goes back to the late 18th century when it was owned by some of New Orleans’ most influential first families.

Don Andres Almonester y Roxas reportedly owned the property ‘a long, long time ago,’ as it states in the notarial records of the land. A very descriptive and professional statement!

It’s thought that he owned the property around the 1780s when he owned and operated most of the real estate in the French Quarter. During this time, Don Andres donated a portion of the property to Charity Hospital. Charity Hospital saw a lot of business during that time since Colonial New Orleans wasn’t the cleanest or healthiest city.

It was after Charity Hospital sold the land that the plot of land surrounding 415 Dauphine came to be owned by wealthy families in the area. Within the next few decades, the Chauvins, Broutins, and Bonabels had all owned pieces of it.

From 1808 to 1822, the property was even owned by Augustin Macarty, who was Madame LaLaurie’s cousin or uncle. Yes, we’re talking about that, Madame LaLaurie.

After 1815, the property fell into the hands of a free African American man named Joseph Forneret.

A Wealthy Banker Moves In

Samuel Hermann Sr was not born in Louisiana. He was a native of Rodelheim, Germany, born in 1777. Like many Europeans of the time, they saw Louisiana as an opportunity for endless fortune.

After he moved to the Big Easy, he moved some twenty miles up the Mississippi River along the German Coast. He married a woman who was born in Louisiana, Marie Emeranthe Becnel. She was the heiress of the prosperous Becnel family. Hermann had a knack for investing — he worked as an agent and broker for plantations around the area. He did so well that he moved his family to New Orleans in 1813 and commissioned architect William Brand to build him a home in 1831.

Hermann wanted the best of the best. He wanted cypress beams and handmade brick. His unique taste translated to the size of the nails used and even the number of paint coats.

Unfortunately, Hermann’s plan for prestige spiraled and declined after 1837 when the English Cotton Market crashed. This incited a flare of worldwide panic, and Hermann eventually lost the home. He and his family moved out of the house but continued to live in the French Quarter until his and his wife’s death in the 1850s.

In 1857, May Baily’s place opened its doors. It was initially referred to as a ‘sporting house,’ but it was what we consider a brothel.

Brothels were illegal in 1857, and this section of the French Quarter had a surplus of women employed in these types of businesses. Men paid anywhere between $5 and $25 to visit these women of the night.

May Baily entered the prostitution business by necessity. in 1847, her father was taken from her by the deadly Yellow Fever epidemic. May saw no other way to make money to survive and approached her father’s friend for help. She wished to open a ‘sporting house’ on Dauphine Street but needed assistance. The friend agreed, and May’s Place opened its doors in 1857.

However, May’s business had something that the other brothels didn’t. A license.

Under the ‘Ordinance Concerning Lewd and Abandoned Women,’ May Baily’s place was gifted a city license, legalizing all activity there.

May’s employees provided entertainment for the men who walked through her 1820s French cottage doors.

Her business was a staple of the French Quarter, and it remained that way even when the entire section of town was formalized into Storyville, a social reform movement that intended to quarantine all brothels into a 38-block radius in 1897.

These days, that city license is displayed proudly within the lounge, a reminder of the wild days of Dauphine Street. Inside its case, the paper is crinkled and yellowed with age, but the ink tells the story clear as day.

The Other Side of Paradise

While May Baily’s place prospered, others struggled. 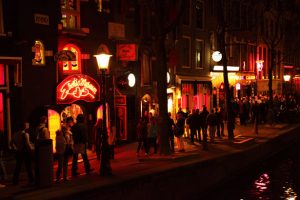 The red lights near the White Elephant captivated visitors, luring them in, perhaps never letting them go. Source: PDP

The women who worked in this section of town were notorious thieves and pickpockets, prone to violence.

Many of these prostitutes were desperate for funds and even more for survival. Willing to do whatever was necessary, these women were known to stand in the doorways and lure in men off the streets like sirens.

Once inside, they beat them, robbed them, and some even ended up dead, their bodies buried in the courtyard.

Some of these women were more heinous than others, and one name sticks out of the crowd for her lewdness — Eliza Riddle.

Eliza was arrested 24 times between 1881-1896. She spent ten years at the Louisiana State Penitentiary for robbing a man of $500. Even while incarcerated, her sentence was extended because she’d convinced her male friends to help her escape.

One reporter for the Times-Picayune even described her as ‘one of the worst creatures on Dauphine Street.’

Today, the Dauphine Orleans Hotel owns the former May Bailey’s and the former White Elephant.

Ghosts of the Dauphine Orleans Hotel

While May Baily ran her establishment, her younger sister Millie hated everything the brothel stood for. She wanted more, and Millie got her chance to escape her sordid life in 1861 when she met a Confederate soldier at the brothel.

They fell in love, and he proposed to her.

She was so excited to be his bride, but her happiness was short-lived. Millie’s fiancé was shot and killed on the day of their wedding. He had gotten mixed up in gambling and ended up on the wrong end of a gun.

Millie was heartbroken; her handmade dress never made it to the altar. These days, guests report seeing her in her lace wedding gown standing near May Baily’s, where perhaps she is still waiting for her love to return for her.

Some guests report seeing the apparition of a Confederate soldier around the hotel — could this be Millie’s beau?

The phantom figure has been spotted in the outer courtyard and has been nicknamed ‘The Worried General.’

One employee states that May Baily’s is the most haunted part of the entire hotel. Glasses fly from the bar, and inexplicable noises echo throughout the establishment.

Entities are known to move belongings, open and close doors, switch lights on and off, and sometimes even touch guests and employees, a cold caress from an otherworldly prostitute.

The ambient history of the whole hotel embraces guests from the moment they pass through the doors. Perhaps the energy from the women who worked here in the past is still at work, a welcoming and kind energy meant to lure you in for something darker.

The old New Orleans, the ghosts of Dauphine Orleans Hotel