A Cemetery Buried Beneath the French Quarter 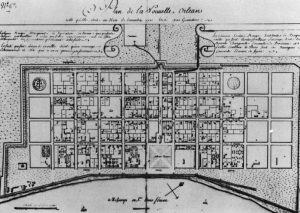 New Orleans is known for many things, bourbon street, Jazz music, and creole gumbo. Many come to see the ornate cemeteries and the beautifully designed tombs that peak above the ground. But did you know there is a cemetery that lays not far beneath the cracked sidewalks and pothole-laden streets of the French Quarter? It is estimated that between 8,000-12,000 people rest below ground in the St. Peter Cemetery. Above it; are bars, shops, a hardware store, and a parking lot. Very few visitors to this part of town are aware of the massive amount of corpses and caskets that lay beneath them. Established in 1726, the St. Peter Cemetery was the official cemetery for the citizens of New Orleans until its closure in 1800. It had become filled to the brim with corpses, farm animals, and even human waste—a dumping ground for the city’s massive death problem. Two large fires and the constant threat of disease left mortality rates very low in Crescent City. St. Louis Cemetery #1 was created in 1789 outside of city limits, and slowly but surely, the St. Peter Cemetery became obsolete. Paved over and forgotten.

Development of the St. Peter Cemetery 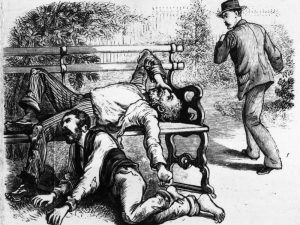 Engraving from a series of images titled “The Great Yellow Fever Scourge — Incidents Of Its Horrors In The Most Fatal District Of The Southern States Source: NPR

Until the early 1800s, the dead were buried below ground just as elsewhere in the United States. The city was suffering from massive yellow fever epidemics, and neither the land nor the resources to properly deal with it. Initially, the dead were placed below ground by the river in front of Jackson Square. Some were buried behind the St. Louis Cathedral in what is now St. Anthony’s garden. If you were of high enough stature and position, you would be buried beneath the cathedral, merely a small church at the time. The St. Peter Cemetery was established in 1724 as the city realized it needed a cemetery outside the city limits. Burying bodies in the center of the Quarter was becoming problematic. Between what Rampart, St. Ann, St. Peter, and Dauphine street are where the cemetery once laid and still does today.

Soon enough, even this location became outdated. The city’s population grew, especially after the Spanish gained control in 1762. Along with the population growth was a spike in the death toll. Yellow Fever ravaged the streets of the city. Bodies would pile up in the streets; the death toll was so high. It took nearly 41,000 lives before a vaccine was invented for it in 1905, although records were not kept until 1817. To impact the issue, the water table in New Orleans was and still is very high. Bodies very often would float away after burial. 1788 was a particularly hard year that overloaded the already bursting cemetery. A hurricane, crop failure, and a large fire that destroyed 80% of the city only increased the amount of dead buried there. The St. Peter Cemetery quickly became a bog full of dead bodies, caskets, and other human waste. It had become an impromptu sewage system for the burgeoning city and a cesspool of disease. St. Louis Cemetery #1 was constructed on August 14th, 1789, to deal with this unsightly problem. By 1802 the St. Peter Cemetery was paved over, and by the 1820s was largely forgotten. 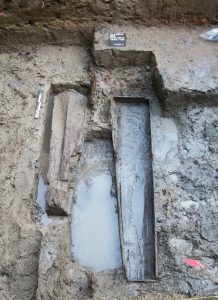 The occupants of the St. Peter Cemetery were never moved. Perhaps it was due to the large number of people buried in it, or maybe it was the lack of technology, but very few were transferred to the newly founded St. Louis Cemetery #1. This means that in modern times caskets are often discovered. While not an everyday occurrence, this has become quite common in the French Quarter due to the city’s ever-chaining landscape. The first modern report dates back to 1910, but the most recent occurred in 2010. A man named Vincent Marcello was building a pool for his apartment complex. During the test, dig archaeologist Ryan Gray discovered something unusual about four feet down. A the end of it all, he and his crew discovered fifteen coffins resting beneath the surface plot on North Rampart Street. This led to an extensive archaeological dig and a cumbersome one at that. Each coffin weighed around 600-800 pounds.

These coffins held the remains of people from all walks of life. French, Spanish, African, Male, and Female were buried in the St. Peter Cemetery. Making it the first integrated cemetery in the city’s history, if not Americas. By 2015 these bodies were moved to St. Louis Cemetery #1, where they now rest in eternal peace. The archeological crew had to acquire a special permit to dig and remove these bodies. Many visitors to the old part of the city will see empty plots of land scattered across it. Caskets were usually found from former cemeteries, but permits could not be acquired. 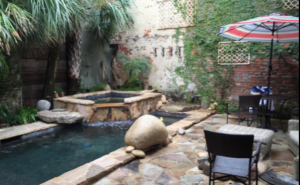 The Pool of Souls Source: WWNO

As for Marcello’s pool, it is referred to as the pool of souls today! Who knows what spiritual activity may have begun after the bodies were moved? This is how the movie Poltergeist begins, after all!

The Final Resting Place of The Great Creole Revolt

Some say that late at night, on stormy nights, they can hear bells and, along with them, catholic hymns being sung. If they peer hard enough through the rain, they can see the spirits of priests dragging bodies along with them into the grounds of the old St. Peter Cemetery. These priests were led by Father Dagobert, who saw injustices taking place within his city and wanted to help. It started in 1762; the French had gifted the Spanish the colony for assisting them in fighting the Seven Years’ War against the British. However, the French of the colony rebelled. The Great Creole Revolt happened in 1768, and for a short time, the territory was yet again French. Soon enough, a Spanish Governor named Don Alejandro “Bloody” O’Reilly appeared. He dealt justice in the name of the Spanish and imprisoned the 12 leaders of the rebellion. Six of them were sent away in exile, one died in jail, and five others were executed in what is now Jackson Square. Their heads were cut off and placed upon pikes. A few days later, on a heavily stormy night, Dagobert and his brothers defied O’Reilly’s orders and took the bodies, along with their decapitated heads, back to the St. Peter Cemetery in the dark of night. Today they say you can see their spirits, always on stormy nights, marching back towards the long forgotten St. Peter Cemetery. Learn more about them and the rest of their ghostly counterparts around the French Quarter on a ghost tour!