The Ghosts of Gettysburg College 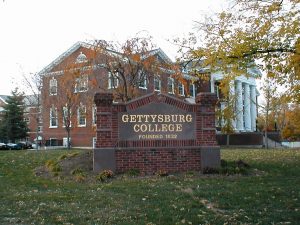 Gettysburg, Pennsylvania is known to many ghost-hunters and historians as one of the most haunted locations in the United States. The American Civil War and the Battle of Gettysburg left a stain on the town of Gettysburg that resulted in many of the hauntings we hear about today, including that of Gettysburg College.

The American Civil War was a trying time for all involved, with families and friends losing loved ones as a result of these darker days in our nation’s history. Gettysburg saw what was possibly the very worst that came of the war.

The battles that took place there are some of the bloodiest and most barbaric ever recorded in our nation’s history. Fought in the year 1863 from the dates of July 1st through July 3rd, the Battle of Gettysburg ultimately resulted in approximately 46,000 to 51,000 casualties.

Looking to explore haunted Gettysburg for yourself? Join us for a hauntingly fun and historically accurate ghost tour!

The battle began on the west at the ridges of Lohr’s, Whistler’s, School-House, and Knoxlyn between Cashtown and Gettysburg. Near Gettysburg, dismounted Union cavalry defended McPherson’s Ridge and Herr’s Ridge, with infantry support arriving to defend Seminary Ridge at the borough’s west side. Oak Ridge, a northward extension of both McPherson Ridge and Seminary Ridge, is capped by Oak Hill, a site for artillery that commanded a good area north of the town.

Since the college stood directly in the midst of the Battle of Gettysburg, it was only logical to use this massive structure as a make-shift hospital in order to care for wounded soldiers. This hospital was unique in that it cared for troops of both the North and South.

It is incredible to note that upon forces taking control of the college, students rushed to the aid of soldiers wounded in battle. Every hallway and room within the college was occupied by an estimated 700 Confederate Soldiers. These selfless students certainly had their hands full in caring for these complete strangers.

Henry Watkins, class of 1864, recorded that from anywhere inside Gettysburg College, and at any time, the shrieks, prayers, and moans of the wounded or dying could be heard. This fact will come into play shortly.

For a month after the Battle of Gettysburg, the college continued to serve as a Confederate hospital and prison camp for captured Union soldiers and officials. Surgeries also continued well after the war, taking place in Penn Hall and the surrounding fields, while the dead remained scattered outside.

At the close of the battle, nearly 22,000 wounded soldiers remained on the battlefield. These troops were subsequently treated at the outlying Camp Letterman hospital or nearby make-shift hospitals in houses, churches, and other buildings. Dead soldiers on the battlefield totaled 8,900, with contractors hired to bury the dead that resulted from the grisly war.

Strange Encounters at the College

With so much torment and chaos taking place within the hallowed halls of Gettysburg College, it’s a foregone conclusion as to why this place could possibly be haunted. To this day, visitors, students, and faculty alike account for unexplainable occurrences.

One location at the college that seems to garner more attention from ghost-hunters than any other is that of Penn Hall. Numerous people have reported hearing the moans and cries of young men, presumably belonging to the lost spirits of soldiers who were injured in battle and ultimately died within Penn Hall.

The details of many of the sightings here are chilling, to say the least. One report came from a couple of college administrators back in the 1980s who were walking to the lower portion of Penn Hall during a late night working together. Upon arriving from the elevator ride down, when its doors opened, there stood dozens of apparitions dressed in hospital attire tending to fallen soldiers.

Like something directly out of a horror flick, the spirits simultaneously looked up at the administrators who quickly fled to the aid of a nearby security guard. However, when the three of them returned to the grisly site, all evidence of their encounter was absent; only a dark and empty room was to be found.

It’s interesting to add that, years ago, a couple was retold this story by a complete stranger and professed that they know all about it, as the person who experienced this event was a friend of theirs who once attended the college.

But after further details were given by the stranger – namely, that two administrators had witnessed the spirits – it turned out that the couple was referring to an entirely separate account. This would seemingly cement that Penn Hall is indeed haunted.

Ghostly soldiers are a common sighting at Gettysburg College, but one particular location is home to a spirit of a different type known as the “Lady in White”. Her dwelling place of choice is that of Glatfelter Hall.

Her story alleges that she lost her love as a result of the war and committed suicide by jumping from Glatfelter’s bell tower, torn over her loss. Lore tells that whoever looks into her eyes will end up meeting the same fate as she.

Another widely-circulated tale is that of another apparition who frequents Penn Hall. Referred to as either the “Lone Sentinel” or the “Lookout”, this ghostly phantom is often seen carrying a lantern and rifle, as if still carrying out his duties and on his patrol all these years later.

It is truly incredible to hear how the students of Gettysburg College sprang into action in order to come to the aid of their wounded brethren. Whether they were fighting for the North or South, prejudices were set aside.

This is a sobering lesson that many today would be well-served to learn from. So often we see actions and events taking place in America that are merely an eyelash away from reliving the agonizing times of the Civil War. We need to check our emotions to possibly prevent another civil war from breaking out.

The events that unfolded during the trying times at Gettysburg College will forever go down in history as some of the most patriotic actions ever to be displayed by our nation’s youths. Their selfless heroics no doubt served to save the lives of many wounded soldiers who were fighting for what they believed.

These events certainly come into play when stories of ghostly activity are reported. Spirits of lost love, brave young men and women, mighty soldiers, doctors, nurses, and generals are all said to have been seen within Gettysburg College. Most seem to be harmless, simply reliving the days of the Civil War.

Throughout Gettysburg College’s history, it has been the source of many ghostly accounts occurring within its walls. Being home to some of the bloodiest events during the American Civil War, it is no wonder that this location is a favorite of many ghost-hunters and thrill-seekers.