The History of Haunts at Little Round Top 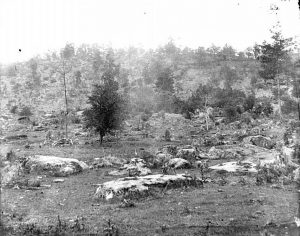 Any quick Google search about Gettysburg fills a browser screen with results of battlefield tales, stories of soldier’s bravery and of course countless reported hauntings. One must think there should be thousands of ghost hunters out there walking the 30,000 acres of fields searching for entities who have not yet gone to rest.

If there is a single place in America where the dead have a good excuse to stick around, Gettysburg is that place.

In 1863, Gettysburg was nothing more than a sleepy town in the Pennsylvania countryside with a population of just about 2,500. It had a touch of industry and even a college, and even over the years it hasn’t changed that much. Gettysburg’s population has grown from that 2,500 to less than 8,000 — almost as much growth in the past 150 years as the number of dead delivered on their doorstep in July of 1863.

It’s believed that when one’s life is ended tragically or violently that a spirit will tend to stick around, perhaps confused of what occurred or angry that their unfinished business still remains.

Ghostly reports at Gettysburg didn’t start after the battle. Like any town, it had its share of violent happenings beforehand that put it on the map. In fact, the very first documented haunting in Gettysburg helped to lead to the battle of Little Round Top itself.

‘The 20th Maine division were marching towards the Pennsylvania hamlet when they struck a fork in the road and found themselves unsure which direction to proceed. Luckily for them, a mounted rider appeared, albeit in somewhat unusual and old-fashioned uniform, who directed them in the right direction, and even brought them to the top of Little Round Top, where they became famous for repelling one of the first massive assaults on the union lines. Even as they followed this unnamed rider, many found his appearance unusual, particular the eerie glow which seemed to emanate from him. When he disappeared without a word, many were convinced that he was not of this earth. Lincoln’s Secretary of War,  did a proper investigation of the matter, and was told by Colonel Joshua Chamberland, one of the heroes of the battle, “We know not what mystic power may be possessed by those who are now bivouacking with the dead. ‘

History of Little Round Top

Little Round Top is a small rocky outcropping just south of Gettysburg, Pennsylvania. It’s the companion to the adjacent taller hill, Big Round Top. It was the site of an unsuccessful assault by Confederate troops against the Union which occurred on July 2nd, 1863.

Little Round Top was defended by a brigade under Colonel Strong Vincent, who was mortally wounded during the fight and died just five days later.

Approaching Confederates were the Alabama brigade of Hood’s division, commanded by Brig. General Evander Law. He dispatched the 4th, 15th, and 47th Alabama and 4th and 5th Texas Brigades to Little Round Top and ordered his men to take the hill.

The soldiers were exhausted, having marched more than twenty miles that day to even reach the site. The day was hot and their canteens were empty — but Law ordered they move out before they could refill their water.

Approaching the Union line on the hill, Law’s men were thrown back by the first Union volley and withdrew for a bit to regroup. The 15th Alabama repositioned themselves further right in an attempt to find the Union left flank.

The Union left flank had over 386 officers and men of the 20th Maine regiment and the 83rd Pennsylvania. Seeing the Confederates shifting around his flank, Colonel Joshua Chamberlain stretched his line to the point where his men were in a single file line, and then ordered half of them to swing back during a lull. It was then that they ‘refused the line,’ and formed an angle to the main line in an attempt to prevent the Confederate flanking maneuver.

Chamberlain knew his men were low on ammo, his numbers were being depleted, and his men would not be able to fend off another Confederate charge. He ordered his men to equip bayonets and counterattack.

As soon as his left flank was in line with the rest of the regiment, the remaining men would charge akin to a door swinging shut. This assault and flanking maneuver halted and captured a good portion of the 15th Alabama.

While Chamberlain ordered the advance, Lieutenant Holman Melcher also initiated a charge from the center of the line that further aided in the regiment’s efforts.

During their retreat, the Confederates were subjected to a volley of rifle fire from Company B of the 20th Maine. This group, who had been hidden from sight, caused considerable confusion in the Confederate ranks.

Little Round Top was the site of constant skirmishing later that day and after all was said and done, there were 134 Union troops killed, and 279 Confederate troops killed.

Hauntings at Little Round Top

One story from Little Round Top sticks out — a group of reenactors were relaxing on Little Round Top close to sunset, when they heard a rustling in the trees. They said that a ‘rather haggard old man’ in a Union uniform came out of the trees. He reeked of sulfur — one of the main ingredients of black powder guns during the American Civil War. He proceeded to give the startled group of reenactors a handful of musket rounds.

They had assumed the man was part of production, but later found out that the musket rounds that were handed to them were actual rounds — not props. No one on set knew who the man was.

Other strange occurrences at Little Round Top include the persistent smell of black powder, fluttering orbs, screams, and strange footsteps. Some visitors have even felt taps on their shoulder and tugs on their clothing.

All in all, Little Round Top deserves its spot as one of the most important and haunted locations of the Gettysburg Battlefield. It played an important role in diminishing Confederate numbers during the American Civil War.