Ghosts of the Gettysburg Battlefield 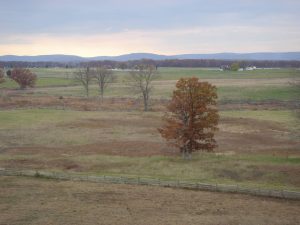 The terrors of the Gettysburg Battlefield are world-famous, well-known, and always remembered. One of the nation’s bloodiest Civil War battlefields, Gettysburg’s haunted battlefield houses thousands of lost souls. After gunfire ceased in the humid morning of early July 1863, 40,000 men lay dead or dying throughout the field.

A first-hand description is given by a New Jersey soldier who was cursed to witness it all was recorded. This individual was tasked with burying the dead here, and his report has stuck through hundreds of years, remaining unforgettable and completely disturbing. He stated that he saw:

“Some with faces bloated and blackened beyond recognition, lay with glassy eyes staring up at the blazing summer sun; others, with faces downward and clenched fists full of grass and earth, which told of the agony of their final moments. There lay a headless trunk, a severed limb or two, and they lay in grotesque abnormal positions that contorted their human form.”

Most of these soldiers were buried right where they fell, sometimes even buried together in unmarked mass graves. Apparitions and spiritual remnants have been reported across the fields for decades, and with such unwavering ghostly activity, we couldn’t fit it all into one single article. We have another entire article dedicated to an additional three of the most haunted spots on the Gettysburg battlefield, including Iverson’s Pits, The Devils Den, and Sach’s Covered Bridge. Read on to discover just a few of the most famous haunted spots on the Gettysburg Battlefield, and if you’d like to experience the hauntings of Gettysburg first hand, join us for a Gettysburg ghost tour!

Located at the foot of the famous Little Round Top, the Slaughter Pen is one of the bloodiest portions of the Gettysburg battlefield. Upon the conclusion of the Gettysburg battle, the ground at The Slaughter Pen was found wholly covered with bodies of the dead. One couldn’t see the grass underneath them. This area was filled with Civil War soldiers who were ambushed, unable to fight back; most of the Confederate troops stationed here perished where they hid.

General Crawford was placed near this ravine with his division to support the Barnes Division, and on the second day of the battle, the scenes that erupted following an attack by enemies in this area can best be described by the General himself:

‘I heard the cheers of the enemy, and looking in front across a low ground, I saw our men retreating in confusion; fugitives were flying across in every direction; some of them rushed through my lines…I directed the command at once to advance. Hardly had the men unmasked from the hill before a battery of the enemy, stationed on a ridge beyond the wheat field opened, with grape and canister. As soon as the skirmishers opened fire on the cannoniers, the battery limbered up and fled. I then formed a line and directed it to cross the wheat field and clear the woods. In doing this, they came upon a brigade of Hood’s division, under Gen. Anderson or Gen. Bonham, composed of Georgia troops; they attacked them, capturing 260 prisoners, the battle-flag of the 15th Georgia, re-taking nearly all the ground that had been lost, and over 7,000 stands of arms, besides one 12-pound Napoleon gun and three caissons, and all the wounded, who had lain entirely uncared for.’

One of the deadliest spots on the Gettysburg battlefield, Little Round Top, was the location of 134 casualties on the Union side as well as another 279 killed on the side of the Confederacy. On July 2nd, 1863, the battle here took place and resulted in a Union victory, even with the resulting Union death toll being half of those the Confederacy lost. The battle was geographically crucial to the Civil War as a whole because whoever controlled Little Round Top could dominate the countryside to the west for miles upon miles. With the Union army arranged mainly to the north of the Top, the hill represented the extreme left flank of the Union lines and losing it would have been disastrous.

Little Round Top’s slope is even known as The Valley of Death due to the extreme amounts of lives lost in such a relatively small space. After the battle, the Union soldiers experienced unadulterated joy and victory. Still, heartbreak set in soon after once night fell, and the soldiers looked to the ground at their brothers in arms lying motionless. The angel of death had indeed proven itself, handing out some fearsome work at Round Top that day.

Today, Little Round Top and The Slaughter Pen are available for viewing, and visitors to the site report apparitions and disembodied voices. One account, though, is most peculiar and tells of a harrowing story coming from a group of Civil War re-enactors in the area as they were creating a film called “Gettysburg.” As they worked, they were approached by a Union soldier, who reeked of sulfur and was haggard and dirty. The workers assumed he was just an extra for the film, but they quickly changed their minds when the soldier handed them ammunition for their guns, which they believed to be blank rounds. It was later determined that the man was not an extra and was not involved in the film whatsoever and that he had handed the crew several pristine condition Civil War-era musket rounds – not blanks. Thankfully no one shot the rounds, only to add another soul to the death toll! How could this spirit interact so physically with the living?

Triangular Field is situated just northwest of Devil’s Den in Gettysburg. Not much is to be found about this particular area of land, but hundreds of strange accounts have been reported coming from the field. Apparitions of Confederate sharpshooters have been sighted by the rocks down near the bottom of the field itself, disembodied ‘rebel yells’ have echoed out across the plains, and visitors report seeing impressions of bodies in the grass, crawling certain directions. Cannons and screaming are reported throughout the entire Gettysburg battlefield, but especially here at Triangular Field.

The sounds of moaning and dying soldiers are still heard, even today, their energies echoing on. Union soldiers have been spotted at the field’s left gate entrance, and many visitors report being approached by men dressed in Civil War garb. Many visitors assume they’re re-enactors but later find out that no re-enactments were occurring that day. One of the strangest reports is that no matter how up-to-date or technologically advanced one’s camera equipment is, it refuses to function while in Triangular Field. Photos taken are later found to be nothing more than blank screens and white film. Distant sounds of wartime drums have also been heard soaring across the fields at Gettysburg. Most visitors who dare to step foot on the battlefield itself or even in the surrounding buildings leave the area with a ghost story, whether it be a sighting of a full-body apparition or just a whisper from an unseen soldier in their ear.

Due to its tragic history, the Gettysburg Battlefield and its surrounding areas are crawling with ghostly soldiers and those who were involved in the skirmishes, from active fighters to the nurses who tended to the wounded behind the scenes.

The lives lost at Gettysburg are truly astronomical, and one would be naïve to think that the horrors of the scenes witnessed here, as well as the terror felt by the dying, wouldn’t leave an energetic imprint on the entirety of the land. Forty thousand men died or suffered significant injury on this area of land, and that energy can be felt to this very day. Just setting foot on the ground at Gettysburg is a sobering experience. Taking in the vastness of the grasslands, knowing that there are hundreds of bodies buried below your feet as you walk, unmarked graves dotting the landscape. The land as a whole is truly choked by the negative attachments that were born here years ago.