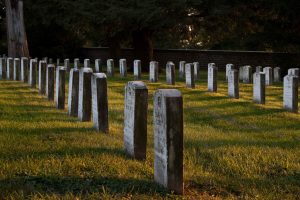 Gettysburg. Just the name alone conjures images of fierce battle, blood, death, and leftover ghostly energies. With so much bloodshed, more than just a few cemeteries were established to lay the country’s dead to rest. The Gettysburg National Cemetery was built for Union troops who died at the Battle of Gettysburg during the American Civil War. It’s now a United States federal cemetery and holds the remains of countless — and we mean countless — troops and veterans of American wars. This place is filled to the rafter with ghosts, some of them documented in various books.

Located in Pennsylvania, the cemetery is located just outside of the Gettysburg borough. It’s controlled by the National Park Service and is part of the original Gettysburg Battlefield, which sits within the Gettysburg National Cemetery.

The cemetery holds 979 unknown soldiers as well as 3,512 burials from the Civil War. It has segments for veterans of the Spanish-American War, and World War I, along with other conflicts as well as graves of veterans’ wives and children.

It remains one of the most humbling and heartbreaking views in America. The cemetery is rolling grass dotted with headstones, as far as the eye can see. Stone monuments tell the stories of sacrifices made, heroic struggles, and the bloody history that came with the birth of the nation.

If you’d like to delve deeper into the haunting history of this hallowed ground, join us for a ghost tour. You’ll experience the darkest side of Gettysburg while learning the stories of the people who came before.

The Battle of Gettysburg

Fought July 1st through 3rd 1863, the Battle of Gettysburg was a carnage-filled arena. Each side fought to get their licks in, Americans against Americans, a war that tore a nation united straight in half.

The battle is renowned on account of the casualties. It involved the most significant number of losses during the Civil War and was a spectacle swamped in inhumanity.

After his victory at Chancellorsville in Virginia in May 1863, General Lee drove his troops into the Shenandoah Valley to launch his second incursion of the North — the Gettysburg Campaign.

His troops’ spirits were at an all-time high, their souls tempered by their triumphs. Lee intended to change the focus of the campaign from Virginia and wished to sway northern politicians to give up their pursuit of the war. He wanted the policymakers to feel his breath on their necks and start doubting their northern resolve.

President Lincoln knew that this was his last stand and that Confederate troops were edging closer, getting ready to strike — and strike hard. Lincoln prodded his troops and sent commanders out into the battle. Major General Joseph Hooker marched his army in pursuit but was soon dismissed just three days before the battle and replaced by Meade.

The sun rose as the sun does on any other day, warming the soil beneath the feet of the young men prepared to die. It was the middle of summer, July 1st of 1863. Lee frantically gathered his forces, his objective was to defeat the Union army that day — but all he was met with was a catastrophe.

Both armies were fighting to end the war, both willing to bend the rules and succumb to their worst instincts. When the bullets ran out, men grabbed their bayonets, when those were broken or bent, they went into a blind rage and fought hand-to-hand combat. Bodies were rendered to pieces, the remains of troops desecrated on the unholy soil.

During the next day of battle, most of both armies were assembled — the first day’s attack was nothing more than a prelude to what was to come.

In the later afternoon of July 2nd, General Lee launched a heavy assault on the Union’s left flank at Little Round Top, The Wheatfield, Devil’s Den, and the Peach Orchard. On the Union right, Confederate troops attacked Culp’s Hill and Cemetery Hill. All over the battleground, Union troops held their lines.

On the third day of battle, combat continued on Culp’s Hill, calvary skirmishes were erupting to the east and south. The climax was an assault known as Pickett’s Charge, with Confederate soldiers running into the center of the Union line. They were met by nothing less than Union rifle and cannon fire — the Confederate army suffered its greatest defeat that day.

Lee, with the understanding of his losses, led his infantry on a tortuous withdrawal back to Virginia.

The battle was the most costly in terms of human life in United States history. Between 46,000-51,000 lives were lost in 72 hours, with both armies sustaining crushing losses.

It’s not surprising that the entirety of the Gettysburg Battlefield and its surroundings are said to be one of the most active haunted locations in the entire country. With such death, dismay and decay, it would be more surprising to learn that none of the negative energy built up during those three days stuck around.

The Gettysburg National Cemetery is completely and utterly overrun by ghosts. The Battle of Gettysburg was one of the most gruesome displays of violence during the Civil War. The area is dotted with graves, monuments, and mass graves that have yet to be uncovered.

Guests to the cemetery report floating balls of unexplainable light roaming about the well-manicured lawns, flitting from one gravestone to the next. Ethereal apparitions are also common in the cemetery, marching along the hills and darting behind trees. At night, the wind carries the sound of gunfire, cannon booms, and screams — all while the cemetery is supposedly empty.

One guest told us of a time they visited the cemetery after visiting the Vietnam Veteran’s memorial:

“I had just stepped foot onto the cemetery grounds when my entire body was hit with what felt like an electric shock. The hairs on my arms and neck stood on end, and my entire body went cold, like a cold sweat. Mind you, it was the middle of the summer. I felt a chilly air on my neck and heard a deep, raspy sigh. I quickly spun around to see who the hell was behind me, and wouldn’t you know — no one. I have never paid my respects so quick and got the hell out of somewhere so fast!’

If you’re interested in other Gettysburg haunted hotspots check out our in- depth article on Big Top Hill.

While the battlefields of Gettysburg are always remembered for their hauntings, the cemeteries that hold the bodies of the men who died there are equally active.

Have you ever visited the Gettysburg National Cemetery? Did you feel anything out of the ordinary during your time there?

Looking to learn more about the spirits and untamed history of Gettysburg? Check out our blog here!