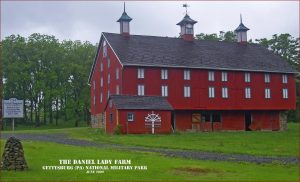 The Daniel Lady Farm played an essential part in the Battle of Gettysburg. The farm grows history, inside and out. Within the barn and house, doorjambs are etched with the initials of soldiers who passed through during the battle. Dried blood stains the walls and the farmhouse floors, and cannonball fragments are lodged in the joists to this day. It stands as a ghastly reminder of the horrors faced in 1863.

Soldiers used the farmland and everything on the property to aid in their battles — furniture was sometimes broken down and used for firewood. Doors were pulled from their hinges and used as makeshift operating tables and stretchers. The Daniel Lady Farm was turned inside out for the purpose of war.

Book a tour with Civil War Ghosts to learn more about the Battle of Gettysburg and its haunts!

Construction of the farm began back in 1820. It started with a large hearth room but soon expanded into the large farmhouse it is today. Completion happened a decade later, and Daniel Lady and his wife raised their seven children happily at the farm.

When the war broke out in 1863, Daniel and his family were forced to leave the homestead, with Confederate forces pushing them out. The Daniel Lady Farm is just one of many properties taken over by the military during the war.

Uniquely, the farm was occupied by both Union and Confederate soldiers. This may be why the farm ranks so highly among haunted locations, with a variety of soldiers passing through its doors — many of them never leaving. Some even argue that this is the most haunted location in all of Gettysburg — even more active than the battlefield itself.

Leading up to the breakout of the war, Daniel lady and his family had heard of the rumors of approaching war. They were worried about the farm being taken over by soldiers, and their worst fear came true when Friday, June 26th came along.

The Lady family was approached by Confederate forces and told they would have to abandon their home for Robert Lee’s army.

Luck Be A Lady 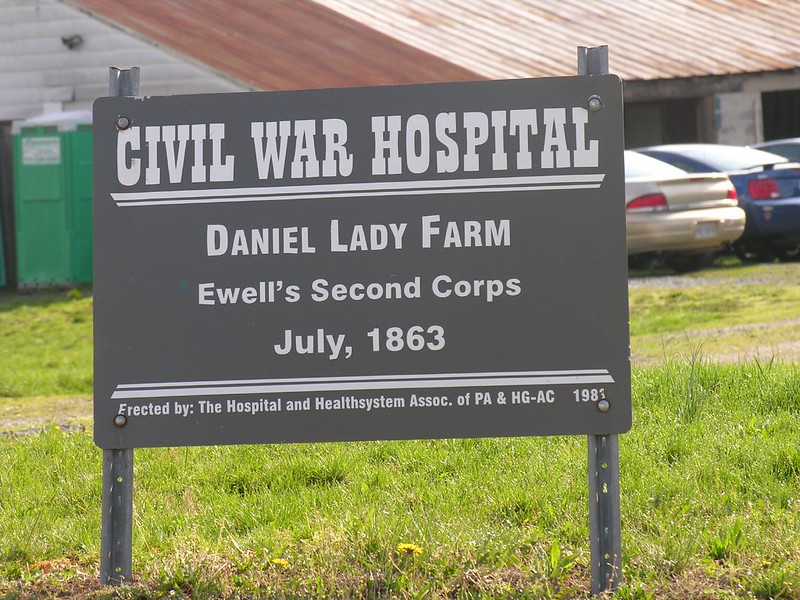 On July 2nd, 1863, Confederate General Edward Johnson ordered General Ewell to set up shop at the Daniel Lady Farm. Using the massive stone home on the property, the officers planted a Union attack that they had hoped would turn the tide in their favor.

Focusing on Culp’s Hill, Confederate soldiers would attempt to overtake the Union troops defending Devil’s Den and the surrounding vicinity.

The Fight For Culp’s Hill

For the Confederates to gain control of Culp’s Hill would have meant a certain victory in the war. There, the Union’s supply line channeled in, and if overtaken, their rations, ammunition, artillery, and medical supplies would have been lost.

It’s said that Union General George Meade viewed the Daniel Lady Farm Confederates as such a threat that he had planned an attack on the farm as early as the second day of engagement. However, his plan was put on hold when Confederate forces engaged Union troops near Culp’s Hill.

By bringing in a whopping 5,000 men to Culp’s Hill, the Confederates greatly outnumbered the Union, which had only 1,424 troops for defense. It’s interesting to note that at no other time in the Battle of Gettysburg, did the Confederates have such a comprehensive advantage over the Union.

If the South had a chance to change the tide, it was now. Well over a million rounds of ammunition were fired that day, with fighting raging on into the early morning hours of July 3rd. A staggering 22,000 Americans engaged in battle as the fate of the country was left hanging in the balance.

There were so many guns being fired that the men could not see in front of themselves, as the whole hill was covered in smoke. Amazingly, the Union pressed on and forced the Confederates to retreat back to the Daniel Lady Farm. That single failed attempt had to be the most disheartening in the war.

The Confederates so greatly outnumbered the Union that winning Culp’s Hill was considered a foregone conclusion. The South returned to the Lady farm, injured, defeated, and weary. Medical attention was provided to the troops in the barn, while higher-ranked officials were treated in the house.

Hauntings at the Daniel Lady Farm

It’s stunning how much of the original farmstead has been preserved over the years. Stains of blood remain from soldiers who came to the farmhouse looking to get their injuries treated. Serving as a hospital, the farm saw amputations, suturing, broken bones, cuts, and even deaths. These deaths have been directly attributed to the ghostly sightings recorded over the years.

Confederate soldiers are said to haunt the very land on which they died. Historical records tell us that when the Lady family returned to their homestead following the war’s end, they found the dead soldier’s body lying in the upstairs bedroom. Because of this, the upstairs area is said to be the most active in the home.

When forensic teams scoured the land, cadaver dogs could find unmarked graves of soldiers buried after the battle in a rush. Apparitions of long-dead troops can be seen wandering the farm on patrol.

Forensic research of the farm also verified that the blood found in the farm buildings was indeed those of soldiers that fought in the battle.

Great care has been given to the Lady farm over the years. Finely detailed restoration has been put into every facet, ensuring that history is preserved. This enables new generations to explore and learn of the land’s valuable historical relevance and role during the infamous American Civil War.

With this level of respect and care coupled with the lost spirits that continue to wander the Daniel Lady Farm, its history won’t soon be forgotten.