The Blood of Big Round Top at Gettysburg 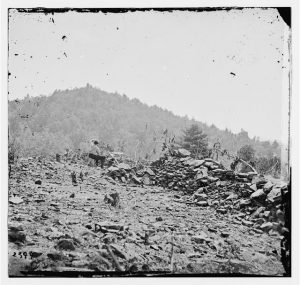 One of the most haunted spots in Gettysburg, Big Round Top

Any quick Google search about Gettysburg and Big Round Top, peer of Little Round Top – known as “America’s bloody hill of destiny” –  fills a browser screen with results of battlefield tales, stories of soldiers’ bravery, and of course countless reported hauntings. One must think there should be thousands of ghost hunters out there walking the 30,000 acres of fields searching for entities who have not yet gone to rest.If there is a single place in America where the dead have a good excuse to stick around, Gettysburg is that place. (If you’re looking to explore the history and haunts of Gettysburg, join us for a Gettysburg ghost tour!)

Gettysburg in the late 19th century — The blood and the guts

In 1863, Gettysburg was nothing more than a sleepy town in the Pennsylvania countryside with a population of just about 2,500. It had a touch of industry and even a college, and even over the years, it hasn’t changed that much. Gettysburg’s population has grown from that 2,500 to less than 8,000 — almost as much growth in the past 150 years as the number of dead delivered on their doorstep in July of 1863.

It’s believed that when one’s life is ended tragically or violently that a spirit will tend to stick around, perhaps confused about what occurred or angry that their unfinished business still remains.

Ghostly reports at Gettysburg didn’t start after the battle. Like any town, it had its share of violent happenings beforehand that put it on the map. The very first documented haunting in Gettysburg actually helped to put Big Round Top’s sister location, Little Round Top, on the map:

‘The 20th Maine division were marching towards the Pennsylvania hamlet when they struck a fork in the road and found themselves unsure which direction to proceed. Luckily for them, a mounted rider appeared, albeit in somewhat unusual and old-fashioned uniform, who directed them in the right direction, and even brought them to the top of Little Round Top, where they became famous for repelling one of the first massive assaults on the union lines.

Even as they followed this unnamed rider, many found his appearance unusual, particular the eerie glow which seemed to emanate from him. When he disappeared without a word, many were convinced that he was not of this earth. Lincoln’s Secretary of War,  did a proper investigation of the matter, and was told by Colonel Joshua Chamberland, one of the heroes of the battle, We know not what mystic power may be possessed by those who are now bivouacking with the dead. ‘

While Little Round Top has its own list of strange happenings and historic bloodshed, Big Round Top saw much of the action during the Battle of Gettysburg as well.

History of Big Round Top

Big Round Top is a boulder-strewn hill that was notable as the high point of the Gettysburg Battlefield. In addition to many battle monuments, a historic structure on the hill is the Big Round Top Observation Tower Foundation Ruin.

During the Battle of Gettysburg, Bog Round Top’s slope, boulders, and timber allowed for the strategic placement of heavy artillery on the summit. During the battle, positions on Big Round Top formed the left flank of the Union defense — the hill was extremely important to the Union side.

While no fighting took place atop Big Round Top, it did bear witness to the bloodshed below.

About the second day of the Battle of Gettysburg:

‘it was growing dark, Big Round Top was still in possession of the Confederate skirmishers who were firing upon our men. It was important to hold this hill, as…it commanded…our line. I directed Colonel Fisher to occupy it at once. He immediately detached three regiments who advanced promptly, driving the enemy before them.’

Big Round Top was one of the most important locations on the entire battlefield. These days, it stands tall over the grassy, expansive fields of Gettysburg and watches over the history and haunts that play out below it.

Haunts of Big Round Top

Near Big Round Top is Little Round Top, another large rocky outcropping at the Gettysburg Battlefield. Little Round Top, was the location of 134 casualties on the Union side as well as another 279 killed on the side of the Confederacy.

On July 2nd, 1863, the battle here took place and resulted in a Union victory, even with the resulting Union death toll being half of those the Confederacy lost. The battle was geographically crucial to the Civil War as a whole because whoever controlled Little Round Top could dominate the countryside to the west for miles upon miles. With the Union army arranged mainly to the north of the Top, the hill represented the extreme left flank of the Union lines and losing it would have been disastrous.

Little Round Top’s slope is even known as The Valley of Death due to the extreme amounts of lives lost in such a relatively small space. After the battle, the Union soldiers experienced unadulterated joy and victory. Still, heartbreak set in soon after once night fell, and the soldiers looked to the ground at their brothers in arms lying motionless. The angel of death had indeed proven itself, handing out some fearsome work at Little Round Top that day.

These days, both Big and Little Round Tops are available for viewing, and visitors to these sites report apparitions and disembodied voices. One account tells of a group of Civil War re-enactors that were approached by a strange, haggard man. As they set up for a film, the man walked up to them reeking of sulfur. The workers assumed he was just an extra for the film and thought nothing of it — that is until he handed them ammunition for their guns, which they believed to be blank rounds used in movies.

It was later determined that the man was not part of the filming and he had handed the crew several mint-condition Civil-war era musket rounds — not blanks. Thankfully no one shot the rounds during filming, only to ass another soul to the death toll!