Phantoms of War: Ghosts of the Haunted Battlefields of Gettysburg 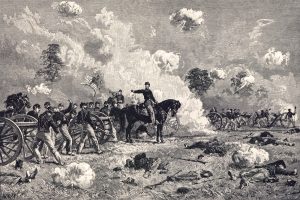 Out of all the wars fought by humanity in its conflict-laden history, no other battlefield has witnessed so many deaths that resulted in ghostly hauntings than Gettysburg. In 1863, Gettysburg was nothing more than a quaint town in the Pennsylvania countryside with a population of roughly 2,500, boasting an economy based on light industry and a small college. It was in this rural town that, quite by accident, the troops of Union General George G. Meade inadvertently smacked into the troops of Robert E. Lee Confederate forces as they were making a push northward. The rest, shall we say, is history.

What transpired was carnage rarely witnessed in any field of war. The Battle of Gettysburg was fought over three days, from July 1–3. The two opposing armies suffered as many as 57,000 casualties, making this the bloodiest battle fought on U.S. soil and one of the most violent campaigns ever waged worldwide! Out of this gory battlefield, many ghosts have been unleashed from the confines of history and into our present reality. A savage, swift loss of life focused on one particular area is a hallmark for explaining hauntings. At Gettysburg, residual soldiers still wage a perpetual war over 150 years after they died, and intelligent hauntings continue as those who left their mortal bodies on the battlefield refuse to pass over from this memorial to their eternal rest in the afterlife.

As we wander about this battlefield and view its solemn monuments, the true scale of this war comes eerily into focus, and the loss of life permeates the very fabric of this area of Pennsylvania. In this environment, Union and Confederate soldiers still refuse to surrender. At Gettysburg, this Nation was divided as never before, brother fighting against brother over ideologies and creeds that would soak these fields in blood and produce the hauntings that make this site so unique.

Are you looking to learn about the history and ghosts of Gettysburg? Join us for a Gettysburg ghost tour!

Devil’s Den has a reputation for being one of the most active hotspots on the battlefield. The fighting in this area was so intense that the entire location surrounding Devil’s Den became known as the Valley of Death. Devil’s Den is an area marked by large boulders between two rocky hills, Little Roundtop and Big Roundtop. While most assume it got its name during or shortly after the Civil War, the truth is that this site was called Devil’s Den well before the war. People living in the area before the Civil War said this spot was the site of a Native American conflict called the “Battle of the Crows,” This site was already haunted before the Union and the Confederates clashed. Another bit of antebellum folklore was that the Devil himself resided in this place in the form of an enormous snake, lying coiled within the fissures in the rock, waiting to unleash Hell upon the land. But Devil’s Den has earned its eternal infamy from the events that unfolded at the Battle of Gettysburg.

On the second day of battle, July 2nd, 1863, the area around Devil’s Den saw extreme fighting between approximately 7,900 men. Confederate sharpshooters who fired at the Union Army on top of Little Round Top used the recesses and crevices of the boulders. By the time the battle ended, over 2,600 men had been killed in and around Devil’s Den. So many Confederates were killed between Devil’s Den and Little Round Top that it was often referred to as the Slaughter Pen. A creek between Little Round Top and Devil’s Den became known as Bloody Run because it ran red with blood that fateful day. Unfortunately, heavy rain on July 4th, 1863, caused the creek to flood, drowning a few wounded soldiers and being taken to the field hospital.

At Devil’s Den, many people report batteries being drained of their power, odd noises, or even voices recorded on EVP. But some witnesses have professed other spiritual activities. The ghost of the sharpshooter Alexander Gardner is one of the phantoms often witnessed at this site. Seen sneaking behind rocks, when approached, the spirit vanishes.

Oddly, a relatively frequent sighting in the Devil’s Den area is that of a disheveled young man. Always described as barefoot, wearing shabby clothes and a floppy hat, he often approaches people and tells them, “What you’re looking for is over there,” while pointing towards the small creek known as Plum Run. He then promptly disappears, leaving those that have encountered him befuddled. This odd ghost has made a name known for himself colloquially as the Helpful Hippy.

It is said that the 20th Maine division was marching toward Gettysburg when they came to a fork in the road and found themselves unsure of which direction to proceed. Seemingly out of nowhere, a mounted rider appeared, wearing a somewhat unusual and old-fashioned uniform, who directed them on which way to go, eventually leading them to the top of Little Round Top, where these troops became famous for repelling one of the first massive assaults on the Union lines. Even as they followed this unnamed rider, many soldiers found his appearance unusual, particularly the eerie glow which seemed to exude from him. When he could no longer be found among the men at the crest of Little Round Top, many were convinced that this helpful soldier was not of this earth. As history unfolded, Little Round Top was successfully defended and culminated in a vicious downhill bayonet charge that led to the slaughter of Confederates.

Even today, a ghostly rider on his pale horse has been seen by visitors to the site. So, too, have the cries of suffering been recorded, and the sound of battle appears to be imprinted into the very rocks and grass of Little Round Top.

Big Round Top at Gettysburg

Big Round Top is a rugged hill that formed the southern edge of the Gettysburg Battlefield. Big Round Top was the high point of the battlefield but was not suited for artillery because it was so steep, strewn with boulders, and heavily wooded. To this very day, Big Round Top appears to be haunted by the ghost of Brigadier General Elon Farnsworth.

Late on July 3rd, Union Brigadier General Judson Kilpatrick ordered the cavalry brigade of Brigadier General Elon Farnsworth to charge the Confederate infantry division who were on the slopes of Big Round Top. During the ensuing battle, Farnsworth fell, was mortally wounded, shot five times, and died on the field. This ill-advised charge ordered by Judson “Kill Cavalry” Kilpatrick, which Farnsworth had vehemently opposed, essentially ended the Union offensive at Gettysburg. Sometimes seen mounted on his horse or witnessed pensively walking the field, Farnsworth’s ghost appears lost in thought before his physical form slowly dissolves into nothingness.

Triangular Field is situated just northwest of Devil’s Den. Hundreds of accounts have been reported from this field, including the vaporous apparitions of Confederate sharpshooters hiding among the rocks near the bottom of the field. Disembodied “rebel yells” have been heard wailing out across the field, and some visitors report seeing impressions of bodies in the grass. Cannon blasts and the anguished screaming in pain are reported throughout the entire Gettysburg battlefield, especially here at Triangular Field.

Even today, the sounds of moaning and dying soldiers are still heard as their energies lingering within the land as residual reminders of the war Between the States. Union soldiers have been spotted at the field’s left gate entrance, and many visitors report being approached by men dressed in Civil War clothing. One of the strangest reports is that no matter how technologically advanced one’s camera equipment is, it refuses to function in Triangular Field. Photos taken are later found to be nothing more than blank screens and white film. Distant sounds of wartime drums have also been heard, keeping time across the field. If you dare tread on the hallowed grounds known as the Triangular Field, keep an eye and ear open, and you may experience a full-body apparition or a faint whisper from an unseen soldier in your ear.

Not all battles are fought on fields, limited to enemy combatants. Indeed, the horrors of war often hit close to home. As the only civilian casualty during the Battle of Gettysburg, Jennie Wade’s death is a glaring reminder that all suffer when war is waged. Jennie Wade was born in Gettysburg, where she lived at home with her mother, Mary, three brothers, and two sisters. When the Battle of Gettysburg began on July 1st, Mary Wade felt unsafe, as the war was waging just outside their front door. So, Mary packed up her family, taking them to the home of the eldest Wade sister, Georgia Anna. Thinking it would be the safer of the two homes, Jennie and her mother helped look after Georgia and her 5-day-old son while there.

Unfortunately, later that afternoon, the Wades found themselves in a heated crossfire. Staying calm, Jennie brought food and water to Union soldiers while helping to care for her older sister and baby nephew through the remainder of the evening. It was later learned that over 150 bullets hit the Wade home during the siege. Sadly, as young Jennie completed her domestic duty of making bread dough, a bullet penetrated the house, passed through two doors, striking her in the back, and tumbling through her heart, killing her instantly. Killed at the tender age of 20, Jennie Wade’s spirit seems to still reside at the aptly named Jennie Wade House, which still stands today. You can even see the scars the bullets left, indelibly etched into the house as a haunting reminder of the brutal nature of war.

Sach’s Covered Bridge was built in Gettysburg in 1854 to span Marsh Creek. After all, that is what bridges are designed to do. But as the Civil War waged in Gettysburg, this bridge seemed to have spanned a creek and the very realms of life and death!

Legend has it that three confederate soldiers were hanged from Sach’s Covered Bridge rafters. Many visitors have claimed to have witnessed full-bodied apparitions of the unfortunate soldiers, many experiencing physical contact such as being touched and even violent hair-pulling and hearing eerie voices echoing within the bridge. Many witnesses have reported the horrific sighting of three disembodied heads floating on the bridge. The strong scent of cigar smoke has also been detected by investigators as if a soldier from years ago still holds vigil over the bridge. The ubiquitous sound of distant gunfire is heard on the bridge at night, as well as the wail of cannons echoing from the distant past.

Strange phenomena at Iverson’s Pits have been documented as far back as the 19th century, making it the oldest haunted site in Gettysburg. On the afternoon of the first day of fighting, more than 900 of Iverson’s brigade died in the grass after a few short minutes of coming under a brutal attack. Days after the battle ended, the fallen bodies were interred in rows of hastily dug trenches that served as make-shift graves. As time passed, the graves settled, visibly marking the field with sunken rows where the trenches had been dug.

Locals dubbed the grim spot “Iverson’s Pits.” Ever since the end of the Civil War, there have been tales of spectral figures and unexplained lights haunting the area.

Accounts Of The Strange And Unexplained. Barnes and Noble, 2003.

Reardon, Carol, and Vossler, Tom. A Field Guide to Gettysburg. University of