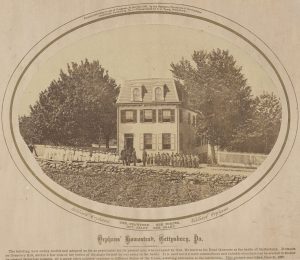 Perhaps their father had gone to war and perished, leaving them with a grieving mother who could no longer function enough to take care of them. Maybe both of their parents had passed away during the war. Whatever the reason, the Civil War and the Battle of Gettysburg specifically left Gettysburg with a gaping wound, a need for a children’s orphanage.

It was July of 1863 in Gettysburg when the battle broke out, considered to be one of the bloodiest battles to occur on American soil, the lives of numerous soldiers and civilians fell victim to the war, its aftermath, and the tragedies that came with it.

Taking place during the American Civil War, a conflict waged throughout Gettysburg, Pennsylvania between two factions known as the Union and the Confederate armies. The Battle of Gettysburg resulted in anywhere between 46,000 and 51,000 deaths.

With such a staggering number of lives lost in just three short days, it’s no surprise that some innocent lives were changed forever by these losses. Many businesses and homes were subject to becoming make-shift hospitals during the war, while others would be taken over by military forces to serve as temporary headquarters for generals and officers. These days, most locations in Gettysburg are said to be haunted by the spirits of the people who died during the battle.

One such place is a children’s orphanage known as the National Homestead. t was needed after the war had left various children orphaned. Without immediate family left to look after these children, it was decided that the best course of action to remedy this tragedy would be to build an orphanage — right where the Battle of Gettysburg took place!

Trying to reason why these bloody grounds were chosen is somewhat perplexing. Nevertheless, this location was hand-picked by Dr. John F. Bourns, the ground was broken and away went construction.

It would be satisfying to know that they all lived happily ever after and stop the story there. But as you have probably guessed, that is certainly not the case. While the best intentions were no doubt in mind for this facility, things turned sour pretty quickly.

Once a happy homestead, the Children’s Orphanage was even visited by Ulysses S. Grant in a campaign to drum up donations in support of it. However, after its first headmistress was replaced, the facility promptly turned a darker cheek.

A woman named Rosa J. Carmichael soon took over the operations of the orphanage. She was known for her wicked and disciplinarian punishments. She even went as far as utilizing the home’s basement as a ‘dungeon.’

The dungeon was used to discipline ‘unruly’ children and its checkered history has led to its notorious reputation and ghostly lore.

It’s reported that Carmichael went as far as to chain up children in her care to the walls of the basement. It’s harrowing to think of what else she did behind closed doors in order to keep the facility running and dish out the discipline she thought the children deserved.

Hauntings at the National Homestead

Over the years, tours have been made available to the public so that they can walk through the orphanage and experience the history it holds. This has resulted in more than just a few ghostly sightings reported by staff and guests. Some have reported seeing the apparition of a small boy who seems to appear in the corners of the basement, only to quickly disappear.

Various colored orbs and strange light anomalies have been seen in and around the home, and some guests have even heard children’s laughter or crying — the duality of the orphanage captured in time.

Over time, the National Homestead was turned into a soldier’s museum that served to allow tourists to get an inside look at life during the American Civil War, as well as to experience the aftermath and what horrors took place within the orphanage’s basement. Letters written by soldiers were available to read, as well as recorded history from civilians who lived through the war. It was an interesting look into the lives of those who provided first-hand accounts of the miseries that come from war.

Tourists and employees alike will no doubt continue to experience otherworldly encounters with the ghosts of Gettysburg’s past. The results of the war that took place here will forever be remembered by such ghostly happenings.

And while it is a shame that the events of the American Civil War and the Battle of Gettysburg had to happen, it is an important part of our young nation’s past, as they helped to shape who we are today as a country. It is crucial that these tales are continually passed on to each new generation of young thinkers.

If left forgotten, we run the risk of making some of the same mistakes that lead to the Civil War in the first place. And this is a dangerous proposition, as history has proven time and again that those who fail to learn from their mistakes are doomed to repeat them.