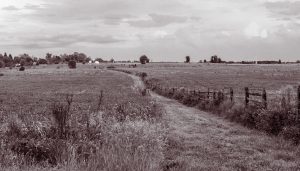 On July 1st, 1863, Alfred Iverson ordered his brigade across an open field known as Iverson’s Pits at Gettysburg. His North Carolinian soldiers marched in a tight formation until Union troops surprised them, rising from behind a stone wall and opening fire on the brigade. Five hundred rebel soldiers marched forward, so beautifully aligned, and fell dead or wounded ‘on a line as straight as a dress parade,’ Iverson reported.

He stated that his soldiers fought nobly, without one man running away in fear.

‘No greater gallantry has been displayed during this war.’

Of course, surviving soldiers told a completely different story. They reported ‘being sprayed’ by the blood of men shot in front of them or hugging the ground while waving white handkerchiefs in surrender.

The University Libraries website described a report from a battlefield artilleryman:

He described one row of 79 North Carolinians executed by a single volley, their dead feet perfectly aligned. ‘Great God! When will this horrid war stop?’ he wrote. The living rolled the dead into shallow trenches — hence the name ‘Iverson’s Pits,’ now a grassy expanse more visited by ghost-hunters than battlefield tourists.

A horrid scene where hundreds of men lay dead and dying under the heat of the July sun. These days, the pits are visited most by those searching for a ghostly truth alongside the apparitions of the soldiers who died on the grounds there.

If you’re looking to uncover the history of the Gettysburg Battlefield and learn the hauntings of the most infamous locations, join us for a Gettysburg ghost tour with Civil War Ghosts!

On July 1st, 1863, the men of Alfred Iverson’s North Carolina Brigade had just arrived in Gettysburg and were preparing to outflank the Union First Corps at Oak Hill. They formed their battle line and advanced toward a line of trees about three hundred yards away.

The brigade was made up of the 5th, 12th, 20th, and 23rd North Carolina infantries. To their left was a low stone wall, but they mistakenly paid it no attention. They wholeheartedly believed they were about to come through the woods, stunning the Yankees and succeeding in this battle.

As Iverson’s men advanced towards the enemy, a line of Federal troops rose to their feet from behind a stone wall and poured volley after volley of musket fire into the Confederate ranks at almost point-blank range. Within minutes, more than 900 men were dead.

“Suddenly, a vast sheet of flame erupted from the stone wall. Some Federal soldiers,who were crouched down behind the wall, could not believe their good fortune at having an entire Confederate Brigade served up to them on a platter, so they burst over the top of the wall and let loose a withering volley at the unsuspecting rebels. Unfortunately for the Confederates, Iverson, their commander, had not deployed an advance line of skirmishers in order to prevent any surprises. Hundreds of North Carolinians fell in straight lines just as they had marched. In the days after the battle, they were buried in an unmarked mass grave, virtually in the same spots where they fell. For years after, the farmer who owned ” Iverson’s Pits ” claimed that his wheat grew the tallest in that part of his field.”

In the initial volley, about 500 men of Iverson’s fell in a straight line. It was perhaps the most intense one-sided minute of slaughter in the entire war.

What could have caused such a deadly mistake? Why didn’t Iverson send a smaller skirmish of troops forward to be sure the coast was clear? Was it carelessness? A side effect of previous injuries leaving him rattled? Could it have been severe shock and PTSD, at that time, unknown and untreated?

As what was possibly the costliest mistake made by any Commander during the Civil War, the energies that remain in the area are palpable and are just as active as they’ve ever been.

For years following the battle, it was reported that hired farmhands refused to work the fields after dusk fell because they were convinced it was haunted. Before the 1970s, when the interest in battlefield hauntings sparked, Iverson’s Pits was the only location on the battlefield that was reportedly haunted, with sightings dating back to a time just after the battle. Sach’s Covered Bridge came soon after that. Iverson’s Pits is said to be the oldest reputedly haunted site of the Gettysburg Battlefield.

Of the longtime hauntings, it’s reported that at night and from a distance across the fields, passersby have seen what they described to be hundreds of white handkerchiefs fluttering just above the ground, the field enveloped in a cool mist. Others report soft white spots that disappear just as one enters the battlefield to investigate further.

These days, the Pits are a picturesque location filled with lush green grasses and eastern wildflowers. The scene changes when the sun slips below the horizon, with strange shadows and orbs of flitting light moving across the field.

With such a tragic and sudden loss of life, it’s no wonder that Iverson’s Pits have long been considered the most haunted spot on the Gettysburg Battlefield.