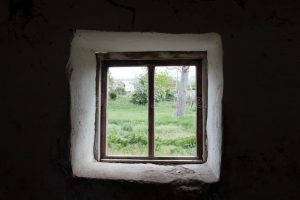 The Hoffman Mansion, once Hoffman Farm, was a 123-acre dairy farm owned by the Hoffman family. The mansion is at East Cavalry Field, where cavalry action occurred on July 3rd, the last day of battle in Gettysburg. It sits next to the Eisenhower Conference Center and Hotel, which was built on the property where Hoffman’s original barn and farmhouse stood. Like many other homes in Gettysburg, the Hoffman Mansion was reportedly used as a field hospital for Union troops during and after Pickett’s Charge.

Looking to visit the ghosts of Gettysburg for yourself? Join us for a historically accurate and hauntingly fun Gettysburg ghost tour.

These days, the Hoffman Mansion is said to be haunted for numerous reasons. During battle, many of the soldiers that were brought to these so-called field hospitals ended up perishing inside them — this means that these private family homes saw numerous deaths.

Another reason the home is considered haunted is that one of the Hoffman daughters is said to have hung herself inside the home after she was told of her beau’s infidelity.

It was July 3rd, 1863, the Battle of Gettysburg was nearing its close, and soldiers and generals alike were worn and weathered. General Lee was staging a charge the night before. General Meade predicted this charge, stating that Lee would attack the center of his lines come sunrise. Pickett’s Charge was an infantry assault ordered by Confederate General Lee against Major General George Meade.

The infantry assault was preceded by a massive artillery bombardment that was meant to soften up the Union defense and silence its artillery, but it was largely ineffective. Approximately 12,500 men in nine infantry brigades advanced over open fields for three-quarters of a mile under heavy Union artillery and rifle fire. Although some Confederates were able to breach the low stone wall that shielded many of the Union defenders, they could not maintain their hold and were repelled with over 50% casualties, a decisive defeat that ended the three-day battle and Lee’s campaign into Pennsylvania. Years later, when asked why his charge at Gettysburg failed, Pickett reportedly replied, ‘I’ve always thought the Yankees had something to do with it.’

After the entirety of the charge was over and gunfire ceased, Union forces were left with 1,500 wounded and dead soldiers. Pickett’s division suffered 489 casualties, and Pettigrew’s losses included 470 dead soldiers. With other brigades’ losses counted, it was estimated that the Confederate side lost at least 1,123 — over 50% of their remaining troops — a devastating blow.

As soldiers straggled back to the Confederate lines along Seminary Ridge, Lee feared a Union counteroffensive and tried to rally his center, telling returning soldiers and Wilcox that the failure was ‘all my fault.’

Pickett was inconsolable for the rest of the day and never forgave Lee for ordering the charge. When Lee told Pickett to rally his division for the defense, Pickett allegedly replied, ‘General, I have no division.’

Back to the Mansion

Let’s get back to the purpose of this article — the Hoffman Mansion. As you can see, countless deaths and injuries occurred not only during the entire three days of the Battle of Gettysburg but during Pickett’s Charge alone. This has caused quite the negative energy to build up in the area, leaving the Hoffman Mansion with a pretty infamous reputation.

While not much can be found regarding the death of the Hoffman daughter, there are reports that she still haunts the attic, making herself known to visitors.

The mansion is also well-known for its orbs near the front parlor of the home where most of the medical assistance and operations were performed — think life-saving amputations without any anesthetics. It’s reported these days that the doctor who was in charge of the Hoffman field hospital still haunts the front room, perhaps tied to the property through some horrific lived trauma.

Other reports include a black mass that appears in corners of the home which many believe to be a bad omen as negative things happen soon after to those that witness it.

Doors are also known to open and close on their own in the Hoffman mansion, and disembodied voices, strange sounds, and physical touches are also reported.